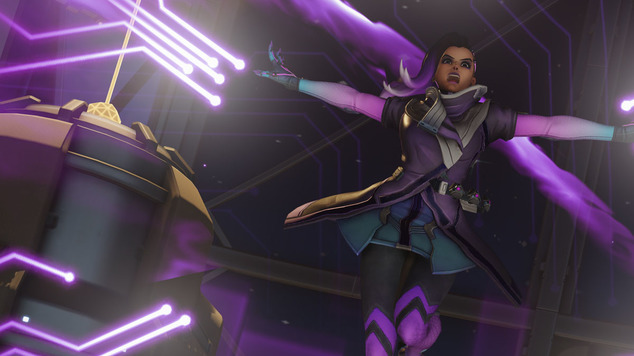 Sombra is a mobile, disrupting hero who can be very annoying to play against when in the right hands. Her hacking can disable enemy abilities, shutting down Reinhardt's shield or leaving a Tracer very vulnerable..

One of the world's most notorious hackers, Sombra uses information to manipulate those in power.

Long before she took up the alias "Sombra," ░░░░░░ was among the thousands of children who were left orphaned in the aftermath of the Omnic Crisis. With much of her country's infrastructure destroyed, she survived by utilizing her natural gifts with hacking and computers.

After ░░░░░░ was taken in by Mexico's Los Muertos gang, she aided it in its self-styled revolution against the government. Los Muertos believed that the rebuilding of Mexico had primarily benefited the rich and the influential, leaving behind those who were most in need of assistance.

Following her many conquests, ░░░░░░ was supremely confident in her skills, but she was caught unprepared when she stumbled into the web of a global conspiracy—one that had also noticed her. With her security irreparably compromised, ░░░░░░ was forced to delete all traces of her identity and went into hiding.

She later reemerged as Sombra, upgraded and determined to find out the truth behind the conspiracy she had uncovered. Sombra launched an even more audacious string of hacks, and her exploits earned her no shortage of admirers, including Talon. She joined the organization's ranks and is believed to have contributed to its massive cyberattacks against corporations with strong ties to their governments. These efforts incited a popular revolution in Mexico against LumériCo and breached the security of Volskaya Industries, the manufacturing arm of Russia's anti-omnic defense.

Tip - Sombra's weapon has very short range and quite a bit of spread. If you are looking to deal heavy damage make sure you are close to your targets.

Hack - Hacking an enemy will interrupt any channeled effects (including ultimates) and prevent the activation of abilities, with the exception of a Hero's Passive. Hacked enemies also have their health bar and ultimate status revealed for a longer duration.

Stealth - Sombra becomes invisible for a short period of time, during which her speed is boosted considerably. Attacking, using offensive abilities, or taking damage disables her camouflage.

Translocator - Sombra tosses out a translocator beacon. She can instantly return to the beacon’s location while it is active (including when it’s in mid-flight).

Tip - Translocator can get you out of stick situations as well as allow you to travel to places you could not walk to.

EMP - Sombra discharges electromagnetic energy in a wide radius, destroying enemy barriers and shields and hacking all opponents caught in the blast.

Sombra's stealth and debilitating attacks make Sombra a powerful infiltrator. Her hacking can disrupt her enemies, ensuring that they're easier to take out, while her EMP provides the upper hand against multiple foes at once. She can help allies push by disabling Reinhardt's shield with Hack or pick off a squishy target such as Ana. Sombra’s ability to Translocate and camouflage herself makes her a hard target to pin down.

Tip - Don't waste your hack on health packs you don't think your team will pick up often. It has a fairly long cooldown of 8 seconds.

Heroes listed here are particularly challenging for Sombra. While those listed can still be killed, they pose a particularly difficult challenge for him so be sure to take extra care.

The Basics - From a Top 500 Sombra Player

This list of tips and tricks are just a handful of things we think will help your Sombra play. We'll continue to add to the list as required and if you have any tips you'd like to share, let us know in the comments below and we'll place them here.

2. If in a bad spot, throw your Translocator straight up and stealth as you teleport up. It is much harder to hit an airborne target than a grounded one.

3. Don't randomly hack people. Save it for when you need to disable an important enemy ability.

4. Hacking disables most abilities but it does not stop passive such as Pharah's Hover.

6. You are temporarily invulnerable while teleporting.

7. Reinhardt is an excellent hack target.   Taking down his shield is an enormous boon (creates not only time, but space) for your team.

8. Contest a point while invisible and then throw your translocator straight up to contest it for a wee bit longer.

9. You can use your translocator to get out of a Graviton.  Sorry Zarya.

10. Sombra may be the best Heroine in the game at destroying Symmetra's teleporter or shield generator.   Invisibility gets you in.  Translocator gets you out.

11. Sombra is built around a 15m area of influence.  Her hack reaches 15m.   Her damage drops off after 15m.  Her EMP radius is 15m and her decloaking audio becomes silent at 15m.

12. Hacking Tracer repeatedly can force a switch.    A Tracer without Blink is an easy target.

13. D.Va with Defense Matrix up is a great hack target.

14. Hacking Winston takes away his jump and hence his escape.