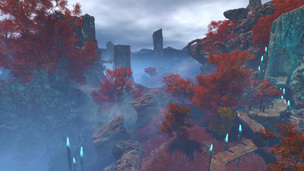 The MMORPG industry as it stands today is a vastly different beast than it was back in the late 1990s. Current and in-development games still draw heavy inspiration from the original EverQuest formula in many ways, however, and owe a certain debt of gratitude to Brad McQuaid who was one of the visionaries that helped put the industry on the map to begin with.

The original Vision  largely set the tone for the following 15 years of MMORPGs, but during that time it seems a lot of the depth and scope of gameplay has been diluted and sanitized for the sake of appealing to broader audiences. McQuaids newest foray into massively multiplayer territory, Pantheon: Rise of the Fallen, will attempt to recapture some of the magic that helped put the concept of MMORPGs on the pop culture map in the first place.

With a major Kickstarter campaign in full swing, Brad was awesome enough to take some time out of his busy schedule to answer some of our questions about Pantheon, and how it stands to shake the industry up by reminding it what made it special in the first place.

The Importance of Social Gameplay

Social or group gameplay has largely been whittled down to a smattering of dungeons or raid zones in most games these days. While out in the open world most adventurers function more like independent mercenary contractors rather than true heroes who are willing to band together to fight unspeakable evil.

This shift in focus to purely soloable gameplay may have helped pave the way for greater accessibility, but at the same time the gaming industry as a larger entity has finally begun to see the wisdom of proper group play. One only has to look as far as the wildly popular League of Legends for an example of a game that has thrived based on the notion that group play can and perhaps should be the focus of online games.

Considering the major role grouping played in Brads previous games, I couldnt help but ask if that would continue to be the case with Pantheon.

Social and group play are integral to Pantheon. The vast majority of content is group-oriented. We want to bring back that feeling of accomplishment you get when your group or guild conquers a dungeon or defeats a formidable boss mob.

Of course, one of the key components of grouping  at least historically speaking  has been the holy trinity. In other words, the idea that a group would be formed around specific roles that form the basis of how a particular class functions. Originally this consisted of tank, healer, and crowd control, with the rest of the group consisting of pure DPS or other utility roles. Later on, the trinity somewhat dropped the CC component in favor of DPS, but the spirit of having a solid foundation or core to a group remains intact to this day.

When it comes to grouping in Pantheon, Brad went on to explain, Pantheon is about having defined goals for classes, which will include the holy trinity. The right mixture of classes in a group is paramount.

Your Characters Place in the World

A broad spectrum of class / race options is definitely appealing, but whats even better is each class or race having a story and purpose in the world. Next up we asked Brad what some of the ways are that players will be exposed to the lore behind their favorite class or race picks.

Weve already started to reveal the backgrounds of classes on the Kickstarter site. Beyond that, players will need to play Pantheon and explore the world. In doing so, theyll discover the history of ancient heroes, many of whom will be the class they are playing. By recovering these long dead heros essences they will gain new spells and abilities, allowing them to customize their classes to some meaningful degree. This way were combining story and lore with character development, which were very excited about.

There is definitely something very appealing about tethering character development to the history and lore behind a given class. These days it seems like classes are mostly a means to an end  a role that needs to be fulfilled  with no real context of why they exist. And while games like Guild Wars 2 have made a push towards a better means of gaining skill points by placing challenges out in the world, again, these largely dont provide any context beyond the challenge / reward dynamic.

Along similar lines, Vanguard is a game that brought a lot of very fresh ideas into the MMOG fold that shockingly have only now just begun to catch on in newer games. (Diplomacy, meaningful travel, and context-aware itemization to name a few) Will Pantheon attempt to push the envelope forward in similar ways? Brad had some equally interesting thoughts, here.

We want to really emphasize what works but has been, for some reason or another, been left out of a lot of modern MMOs. Reinventing the wheel is not necessary, but we want to remember the purpose of the wheel in the first place. We dont believe it needs to be new and flashy to be engaging and fun.

That said, if we feel there is room for innovation we wont pass it by. For instance making climates and locations matter ties into our situational items system, both of which have never really been fully realized in other MMOs.>

That combination of getting back to the industrys roots while also layering in meaningful innovation are part of what has us so excited about the potential that Pantheon represents.

Before we wrapped things up, Brad went on to explain, Were making a special game, one that will resonate with a very specific audience.This is something that has been somewhat overlooked by the genre, and that we may see more of in the future. Having lots of smaller MMOs as opposed to only a few big ones with a larger target audience is an intriguing prospect. But were trailblazing here and the concept of separating an audience from the overall MMO audience is still new and may be even a bit strange to people. So we really need your help to make this dream a reality.

How can you help make the dream a reality? Use your favorite internet quick travel device and head over to the in-progress Kickstarter page where you can learn more about the lore, classes, and concepts behind Pantheon: Rise of the Fallen. Already a backer? Be sure to let us know your thoughts on the game so far in the conveniently placed comments below.