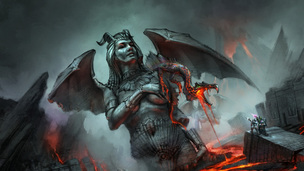 As I pointed out in my recent interview with Tracy Hickman, some fantastic information was dropped in my lap that I felt would make an excellent article. Tracy let me in on the back-story for magic in Shroud of the Avatar, as well as the origin of the non-human races in the new game. I immediately fired off a note to Richard Garriott to ask if I could use the new information. He not only agreed, but spent some time on a call to give me additional information on the subject.

Fans of the game will be interested in what comes next because this is information that hasnt been released anywhere else yet, but Id like to specifically capture the attention of those who arent following the game as closely yet. The way history is being handled in SotA and the thoughtfulness behind the meta-human species in Shroud are indicative of professional game development taken to the point where it becomes art. Yes, I am a fan of the work thats being done here, but hopefully Im about to demonstrate for you why this is something worthy of your fanaticism.

In a sense, the world of Shroud of the Avatar begins in a post-apocalyptic era following the shattering of the worlds moon. The resulting rain of lunar debris wrecks the existing civilization and Richard explains that because the lunar shards have innate magical properties, the resulting cataclysm also shreds the established laws of magic. He goes on to say, so theyre living in a world where the old words of power dont quite work the way they once did, however there are still some small parts of it remaining that seem familiar to practitioners of the art. The old institutions collapse because what theyre teaching is now wrong, but there are also these people who see that some of it works and choose not to walk away entirely. Those people while trying to understand the change, still realize that the old knowledge isnt completely useless. They squirrel away bits of it here and there to preserve what knowledge they can, and that forms the basis for discovering lore later on in the game.

The advancement in the understanding of magic should lend a real sense of progression to the in-game world.

Tracy Hickman tells me, The story were telling in Blade of the Avatar takes place centuries before the contemporary era of the game, so were essentially writing the legends of Shroud of the Avatar. He goes on to remark that hes a fan of the inclusion of clock-work technology in the game because it gives a sense of progression to the over-all story of the in-game world. One of the things that concerns me with the verisimilitude of a fantasy world is that centuries will go by and people are still wearing the same clothes, that there hasnt been very much advancement in culture or magic, he remarks. Thats something theyre making a point to address in SotA.

Were going to see a progression not only in terms of technology, but also in terms of magic, Hickman says. In Blade of the Avatar theyre dealing with the foundations of magic in the world. The wizards in Blade dont really know whats going on yet. As they piece together the new laws of magic through experimentation, a lot of it goes wrong. Tracy Hickman also points out that we often think of sorcerers in fantasy societies as if theyve already discovered all there is to know about magic and that theres nothing new to be done, when in fact in this particular story the repercussions and permutations of what theyre doing is still very new to them.

As readers of Blade of the Avatar will no doubt be realizing by now, for the first time since Ultima III, Richard Garriott has once again made an effort to include non-human races in his game. In my conversation with Tracy Hickman I learned that the more exotic inhabitants of the world are the results of experimentation during the reign of the Obsidian Empire. Originally developed by the alchemical and magical researchers for the imperial war machine, many of these creations escape into the wild, or outlive their creators, to eventually create enclaves and develop into their own unique societies.

Richard says that they had decided to make the effort to include more races of humanoids and Tracy points out that it all started with the deceptively simple question, where did they come from? He continues, We decided to explain this sudden explosion of diversity as the product of early magic. The Obsidians, the wizards of the ancient empire, were struggling to form that budding empire and at the same time were struggling to understand magic. As a result they started experimenting with shape shifting, essentially the genetic manipulation of creatures through their magic. We suddenly had a reason for them to develop elves or satyrs for military purposes.

As one would expect from any game with the hand of Richard Garriott on it, hes injected his twisted sense of humor by forcing players to deal with really big issues. If you were going to create a new life form on purpose, you might start with some other life form. You might animate something that was inanimate or perhaps by devolving a human. Its a deeper issue than it might appear on the surface, especially as our own society debates the aspects of cloning and genetic manipulation. Richard also notes that the new races create an opportunity for racism and for the players to empathize with monsters that are nearly human, or perhaps were once human. Fans of Ultima VI will no doubt be familiar with Richards penchant for forcing players to face their own bigotry.

I expect youre catching the common theme for this article by now. Whether cities, societies, magic, or even technology, Shroud of the Avatar is a game with history and a sense of time. Ive remarked before on my admiration for Portalariums attention to detail when it comes to immersion, and this is that same point made over again. Starr Long has commented on it, but my conversations with Tracy and Richard really brought home the importance this team has put on making the game world feel as lived in as possible.

Other major games hint at having a history, or in some cases depend on previous games to imply it, but I think SotA may be the first to really develop it to this level. When the player discovers ruins in Shroud, they wont just be seeing a cool feature added for the sole purpose of giving the player a new environment to explore. Those ruins will be the remains of a lost city grown from a small village that settled near that particular river for a reason. The player will have a sense of something lost as they search the boneyards of fallen civilizations, and perhaps the realization that some quaint local tradition stems from that long forgotten culture.

Tales of the pre-cataclysm world will have passed into myth by the time players enter the world.

Yet theres more to this story than the developers can tell, and thats why Richard says that once again theyll be reaching out to their fans to help create a deeper and more enriched game. For those who tell a good story or find themselves linguistically cunning, therell soon be another opportunity to contribute to the history and culture of this game. Much as players have enriched Britannia in Ultima Online, theyll have the chance to do it again in Shroud of the Avatar.

Richard says that he intends to start releasing information to backers, perhaps through round table conversations with Tracy Hickman. The idea is to empower backers with the canon behind the world so that they can begin producing fan fiction. Approved works will then be integrated into the game in the form of journals, books, and oral tradition in an attempt to populate the world with a sense of literary culture.

So Endeth the Trick

Thus you now have the reason I appreciate so much what these guys are trying to do. For one, Im just a fan of any effort that allows fans to contribute to the betterment of the greater work. I believe the concept is used too rarely, but shows an intelligence on the part of the developers and a high respect for the fans when we do see it used. Additionally, Im impressed by the raw craftsmanship Im seeing with respect to this game.

Perhaps the budget isnt as big as others and the hype hasnt quite been as high, but then I remember Ultima Online being much the same early on. As much as I enjoyed OU though, I think Shroud of the Avatar will beat it as a work of art, hands down. Much like in custom furniture or in programming, its the details that give testimony to the professionalism of the creator, and thats where SotA stands apart from the field for me.

If you havent been following this game, give it a look and see if you agree with me. If you appreciate well thought-out worlds and creativity, I think you likely will. I think youll also find that Richard Garriott is one of an incredibly few people who include in his games an opportunity for the player to come out of the game a better person. If youre already a fan and interested in supporting the game beyond just throwing money at it, keep an eye out. These crafty guys are about to give you an opportunity to do just that.