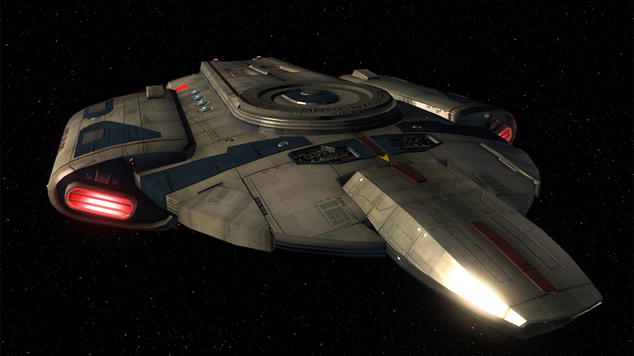 Last week, after a few technical issues, we gave away 100 Stalker Stealth Fighters. This week, we've some more ships to giveaway, but fewer of them. Up for grabs is the Tactical Escort Retrofit, which is officially described as:

The Tactical Escort Retrofit was declared a new type of warship created to fight the Borg but was later revived to fight the Dominion War. Starfleet updated the vessel with the latest equipment available in the early 25th Century, including a universal cloaking device.

To enter our competition, all you have to do is the following:

1. Write a comment below letting us know what you love the most about Star Trek Online.

1. You can make as many comments as you like.

2. Comments can be as long or as short as you wish.

4. 25 winners will chosen by the team at Ten Ton Hammer based on which we like the most.

5. Winners will be contacted via Disqus, and have access to an email account to receive their winning code.