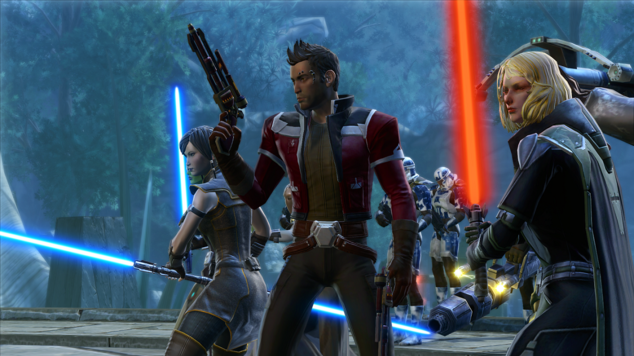 SWTOR Shadow of Revan Preview
Ten Ton Hammer was recently invited to attend an intimate preview setting, where BioWare gave a walkthrough for

Recently, a few folks from the BioWare Austin development team, EA marketing, and a small selection of press all got together for an intimate preview on the upcoming expansion for STAR WARS: The Old Republic, Shadow of Revan. During the livestream, we got to hear from Deborah Shin (Sr Product Manager), Bruce Maclean (Sr Producer), James Ohlen (Studio Creative Director), and Charles Boyd (Lead Writer). They told us a little bit of what's been going on in SWTOR, how it's going, what's coming up, and then Charles Boyd gave us an exclusive first look at gameplay from Shadow of Revan. Boyd said we could ask him about his beard only after the livestream, once we got to the Q&A portion. Sadly, no one did. If I hadn't been so busy listening to the other discussions folks brought up, I might have asked him how he managed to get a perfect mirror between hair and beard. Seriously, folks, it's impressive. 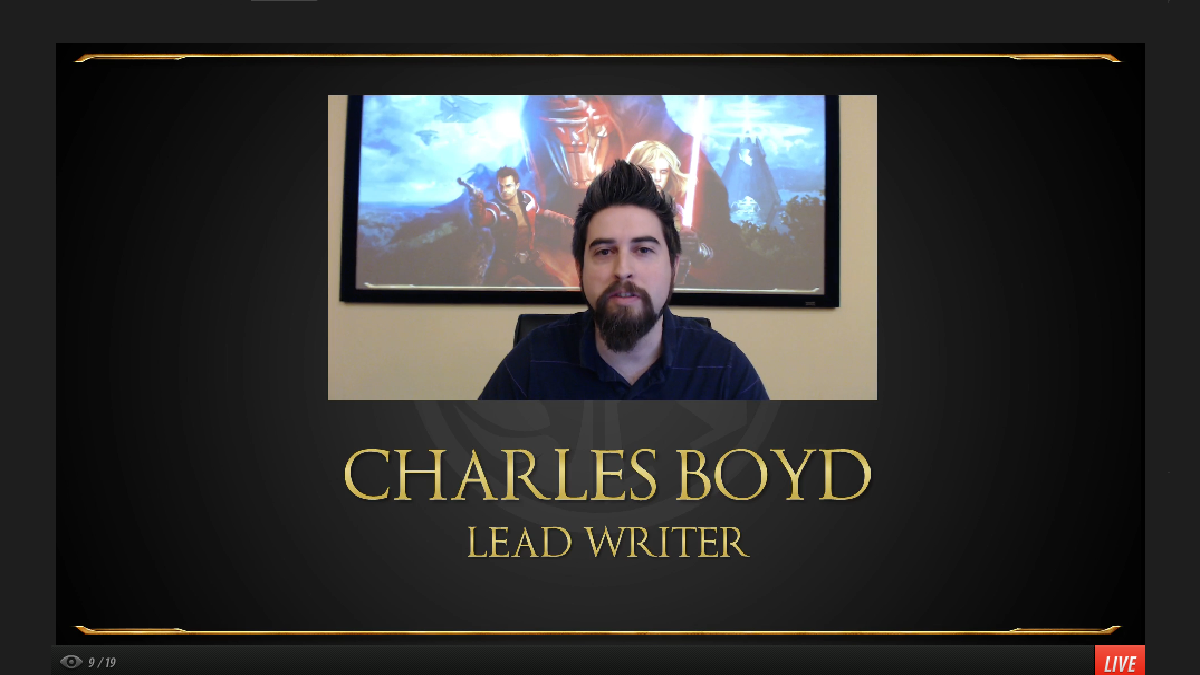 Shin was the first to speak when the first Shadow of Revan livestream began. She reminded us that Shadow of Revan will be available for PC gamers on December 9 and that the purpose of this livestream was to share the inspiration and vision behind the expansion's story. Maclean's part during the livestream was also brief, but he showed excitement for wanting to share with us a first look at a brief moment in the story within Shadow of Revan. He gave us a little bit of history of the game's setting (1,000 years before the movies -- it's been pointed out that this is incorrect, but the thousand year timeline is a direct quote from the stream), its launch three years ago, and that it continues to be a successful game for BioWare. He also discusses the current 12x XP event, where players who pre-order Shadow of Revan before November 2 can earn 12x XP on their characters, which will allow them to exclusively level through class stories. Next month in San Diego, press will even get a chance to experience the upcoming expansion hands-on. 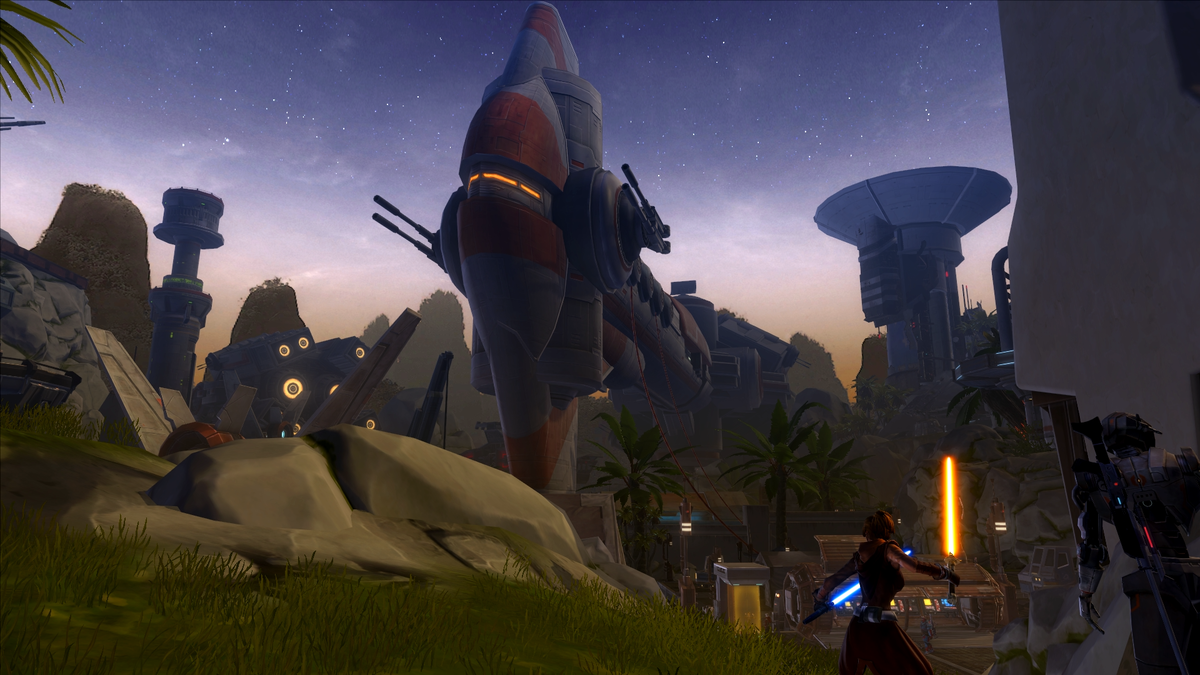 Next up was Ohlen, whom I managed to grab the best possible image of in the history of STAR WARS, gaming and probably the name Ohlen. It's a fact, y'all. I have this power. I'm pretty awesome when I hit pause on the TV, which obviously lead me to capture this Ohlensome image. Maclean introduces Ohlen as a long-time BioWare lead designer, who has had his hand in several beloved BioWare games. Ohlen gave us the history of the universe The Old Republic is built on. I'm not talking about STAR WARS itself, but rather, the story that BioWare has been writing for the past decade, starting with Knights of the Old Republic. When BioWare wanted to develop an MMORPG, they saw the story, worlds and universe from the KOTOR games as the perfect setting. 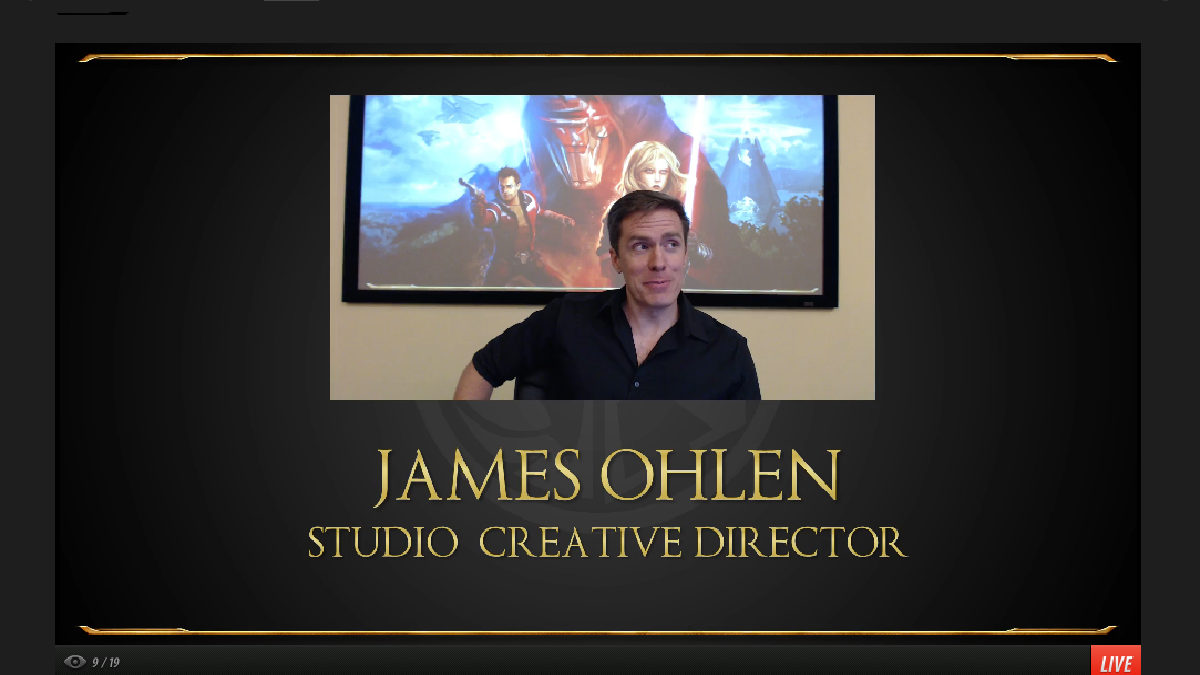 BioWare knew that there would be questions that needed answering, especially where Revan was concerned. A much beloved character (I mean, dude's got his own cult, how adorable is that, right?), Revan has a following not just in the game, but out of it as well. Allowing players to bond with Revan in the KOTOR games naturally made it tricky regarding Revan in SWTOR. This expansion aims to not only answer some long awaited questions, but it will also serve as the final chapter in Revan's story, so BioWare may close the book on him. 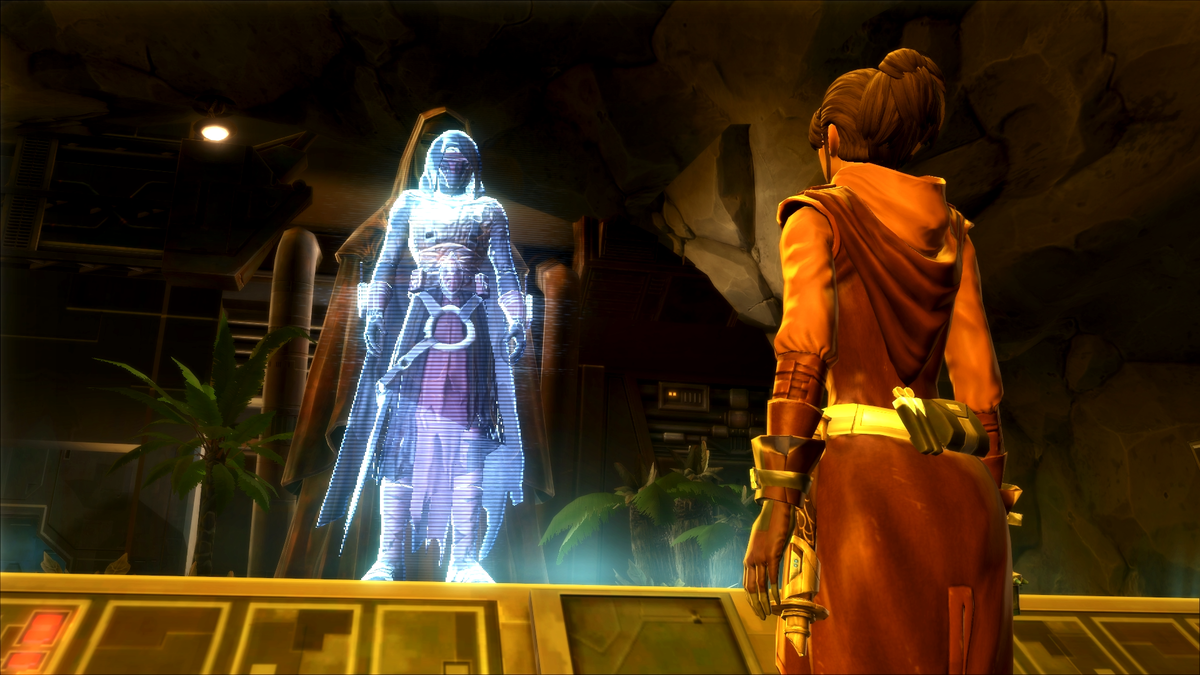 In gathering feedback from the STAR WARS: The Old Republic community, BioWare gained two insights. One, everyone loves the immersive storytelling, especially with the class missions. Two, being that the community, including and beyond SWTOR, want Knights of the Republic 3. How do you satisfy both? Luckily for BioWare being BioWare, these two points can easily go hand in hand. Ohlen says that based on this and other feedback, the BioWare Austin team was able to come up with an action plan for not only Shadow of Revan, but a road map for the game for “many, many years.” He goes on to say that “those plans are pretty damn exciting.” He says that next year is going to be such an exciting time for STAR WARS fans, and Episode VII is only part of that. While he didn't say much, he said that KOTOR fans will have something coming down the pipeline.

And with that tiny morsel of hype, Ohlen introduces Charles McBeardy Boyd. That may or may not be his actual nickname, but hey, he's the one who brought up the beard. I swear, it's not me! Since Boyd is the lead writer, we were getting a glimpse of the story. Class changes and updates will be seen more next month. Boyd's Jedi is fighting through Rishi, a remote world at the edge of the galaxy and the hideout for Revanites, the fanatics who believe Revan is the greatest hero of all time. They often argue over whether Revan is truly light or dark side. Now that Revan's returned, they've become major players. Revanites have infiltrated both the Empire and Republic. At this point in the story, players won't be sure who they can trust. 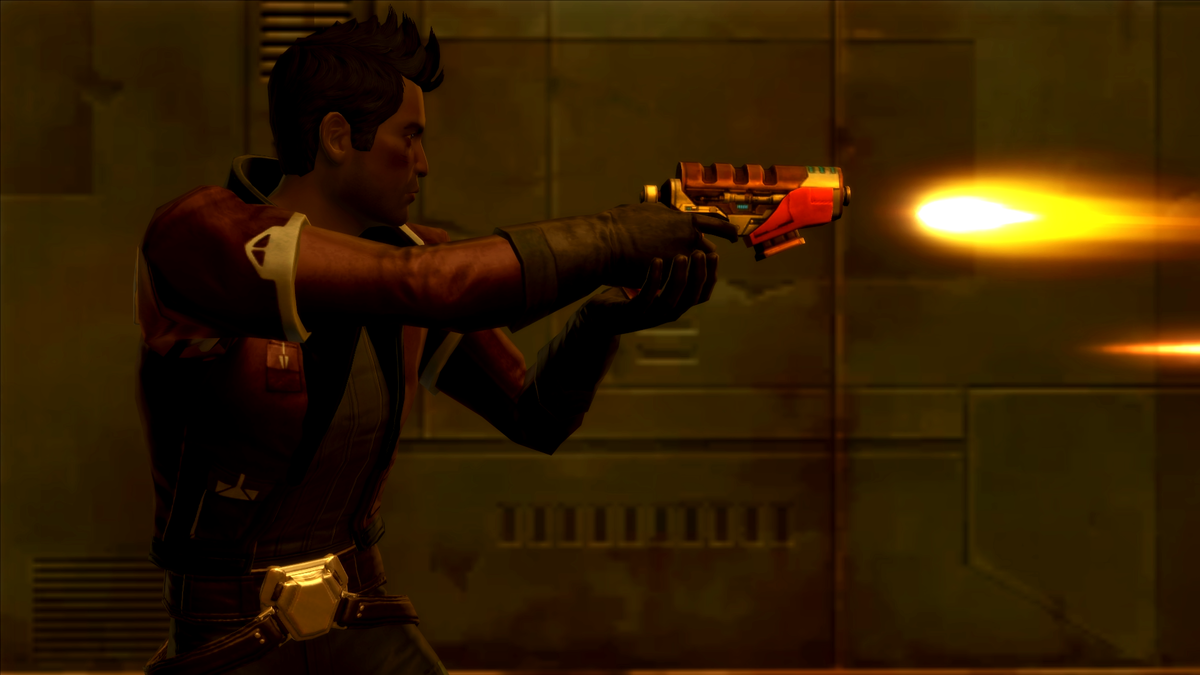 The noteworthy characters for Shadow of Revan come out of the Forged Alliances storyline, which has been the ongoing story through a series of Flashpoints and Missions. With Shadow of Revan, those Flashpoints will become soloable. We talked about them for a little bit during the Q&A session, and I'm pretty stoked to report back that they are tuned for all classes and specs. You'll get a droid to assist you, and I'm pretty ecstatic that my Smuggler will be able to head down there with Corso and debate on whether I should heal him or just let him take one for the team for being so mouthy. The new Flashpoints that come with Shadow of Revan will be soloable, as well, so if you're the type of player who prefers to be a lone wolf, you can totally jam come December. 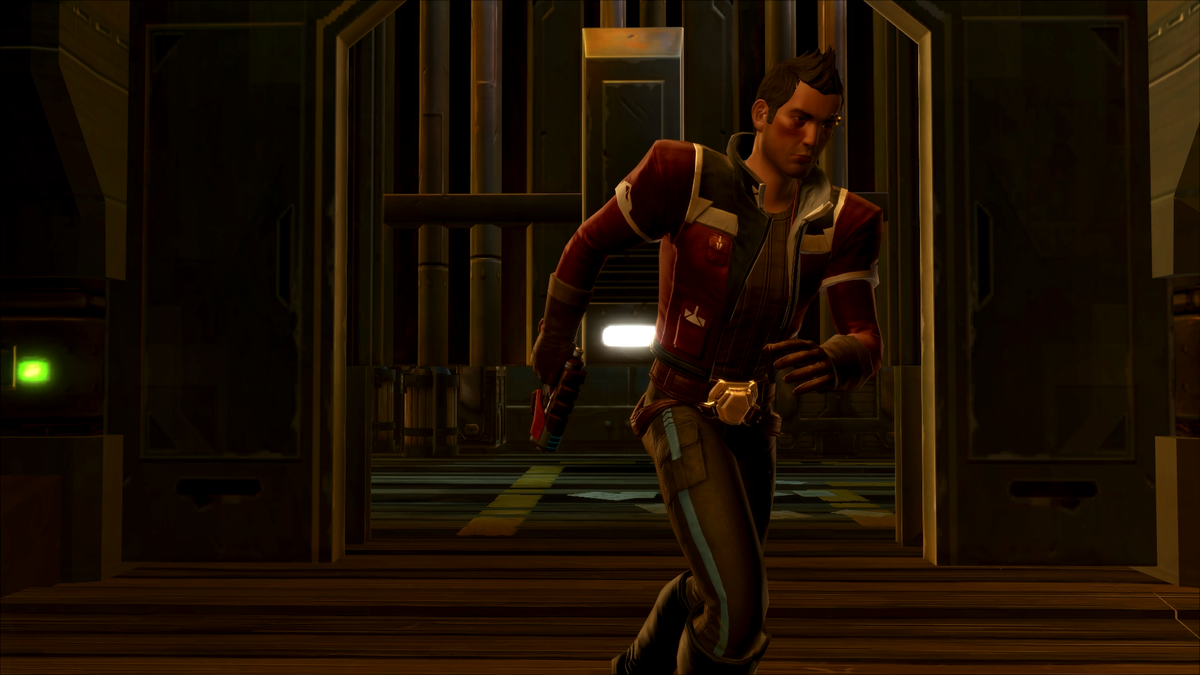 Boyd continues with an overview of Revan, the hero from Knights of the Old Republic. We get a brief history of Revan from the KOTOR series, including his 300 year imprisonment. Remember when images of that were leaked for SWTOR? I do, and the community was feeling a rush of emotions over it. Players were able to free him, which he then used his new found freedom to plot revenge against the Sith Empire. With his army of droids, he tried to take it down. Imperial players could try to throw a wrench in the plot. This seemingly ended in a fantastic duel, where players were left not knowing his fate. Did Revan die? Looks like he did manage to survive, and now we will get some closure on what became of Revan, as well as how his story ends. Why did he turn against both the Empire and the Republic? 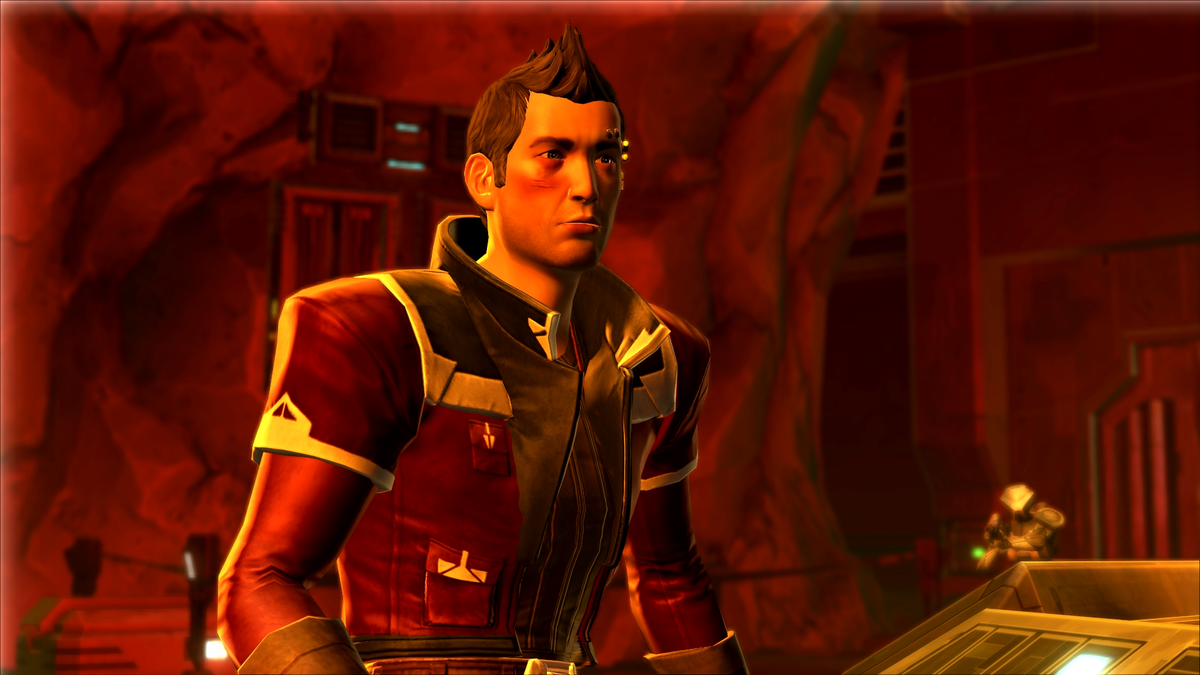 Another really exciting point for Shadow of Revan is that Class Missions return, which are written by Alex Freed, who was brought back on a temporary basis just to create the missions. Each class will get one new mission to play through. Some will be featuring known characters, while some class story parts will introduce new characters. The main point of these new missions will be to define who you are in the galaxy since the last time your story left off. In the solo Flashpoint that Boyd runs through, the point is to find Theron Shan, who was trying to get a key piece of information, but ended up getting captured. 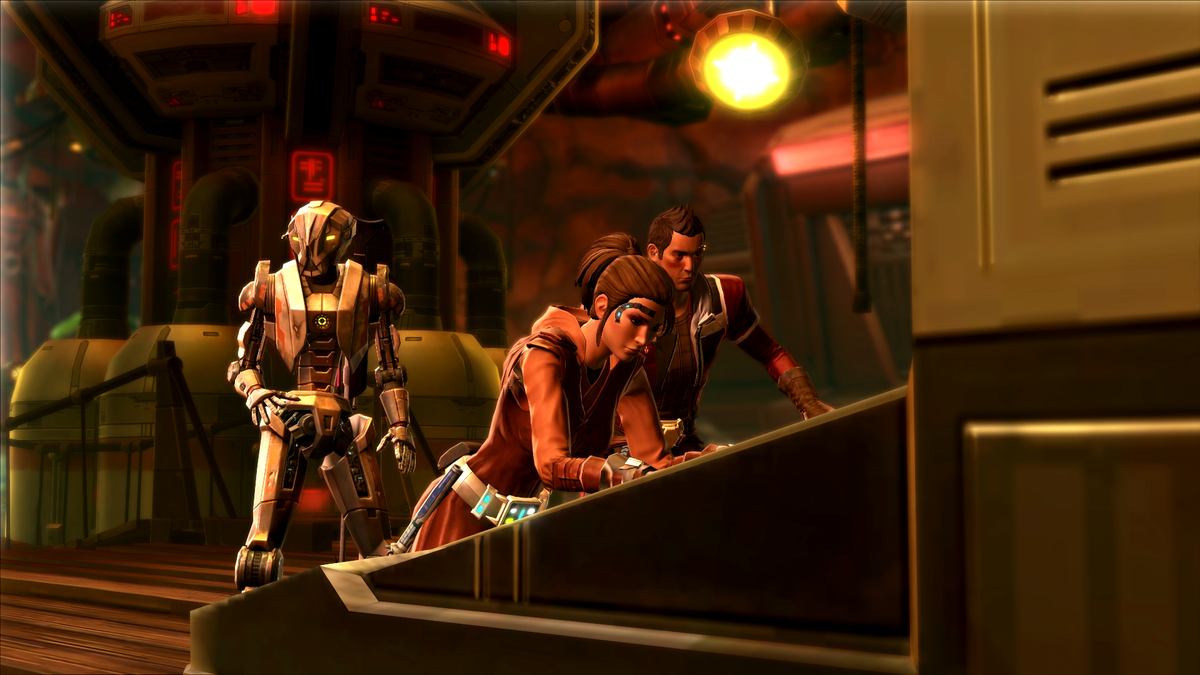 Theron Shan, the son of Satele Shan, is a direct descendant of Revan. He is an anomaly in the Revan storyline, who ends up becoming a secret agent with a Jedi chip on his shoulder after being raised as a Jedi who couldn't make the cut. Boyd stated that players come here to not only rescue Theron, but to hopefully run into Revan as well, and to see what he's been up to lately. While we did get to see some cut scenes, unfortunately the game audio was so low that I didn't get to hear what was going on. I guess I'll just have to find out what happened when I play through the expansion! 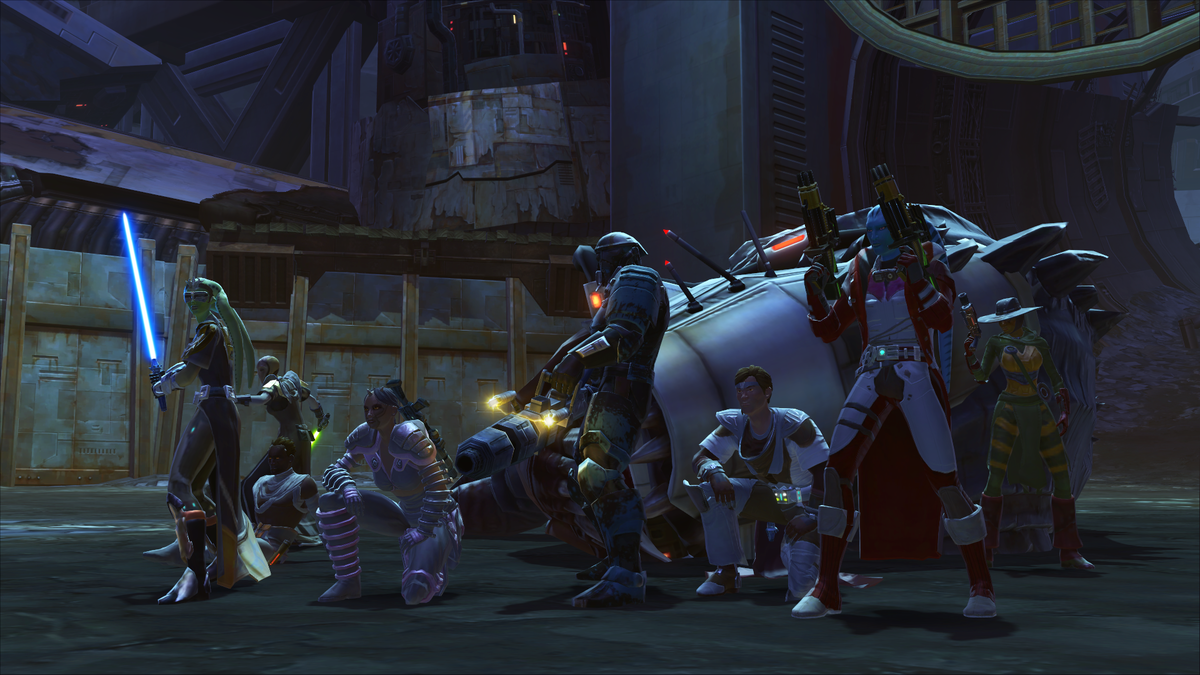 Satele Shan was a character introduced with STAR WARS: The Old Republic. Her son Theron was born without the force. This is where his being an anomaly comes in, since the rest of the family line has the force. With the absence of force, Theron becomes a secret agent. “Which is a hell of a backup career, I think,” says Boyd. 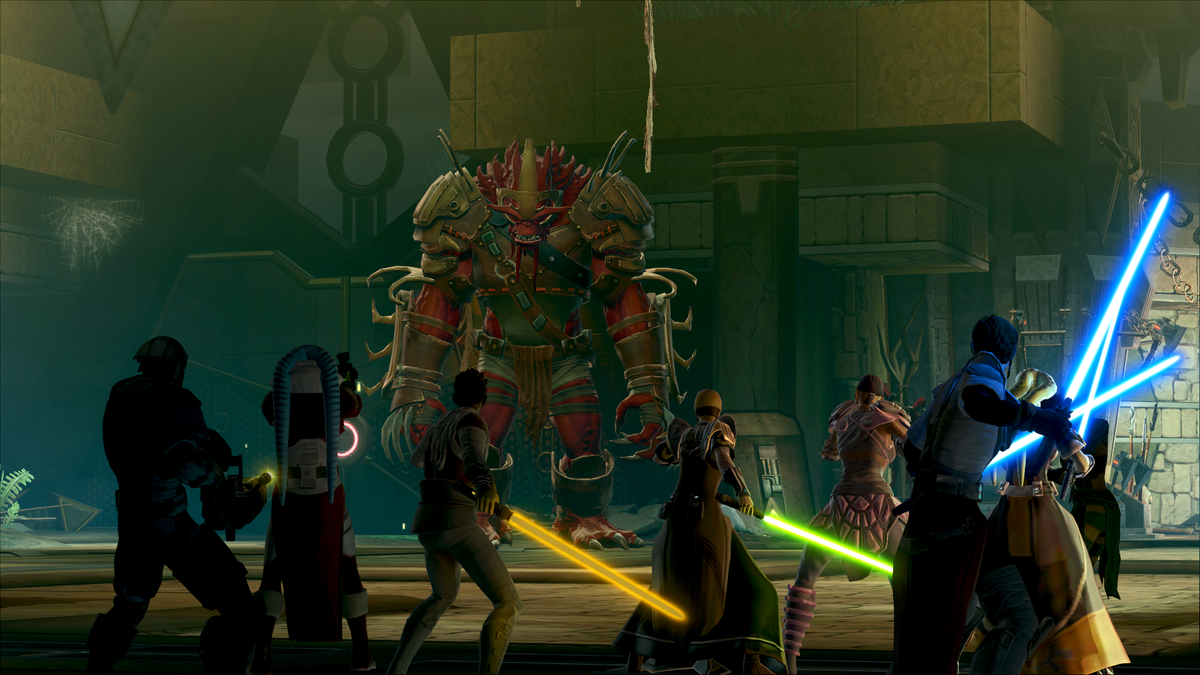 Boyd reminds us of the pre-order bonus of 12x XP that players can use to level exclusively on class storylines. This bonus will take you to level 55, where you can jump into the prelude for Shadow of Revan, which will prepare you for the upcoming expansion. However, waiting until the launch of Shadow of Revan, while it won't give you the 12x XP bonus anymore, you will be able to go through the Forged Alliances Flashpoints in solo mode. Tough choices to make right there. With that, Boyd hands the reins back to Shin, ending the preview, before we moved on to the Q&A session. No one asked Boyd any beard related questions, which might have made him sad. I looked him up on Twitter, so anyone who wants to make his day should send him some beardy tweets. 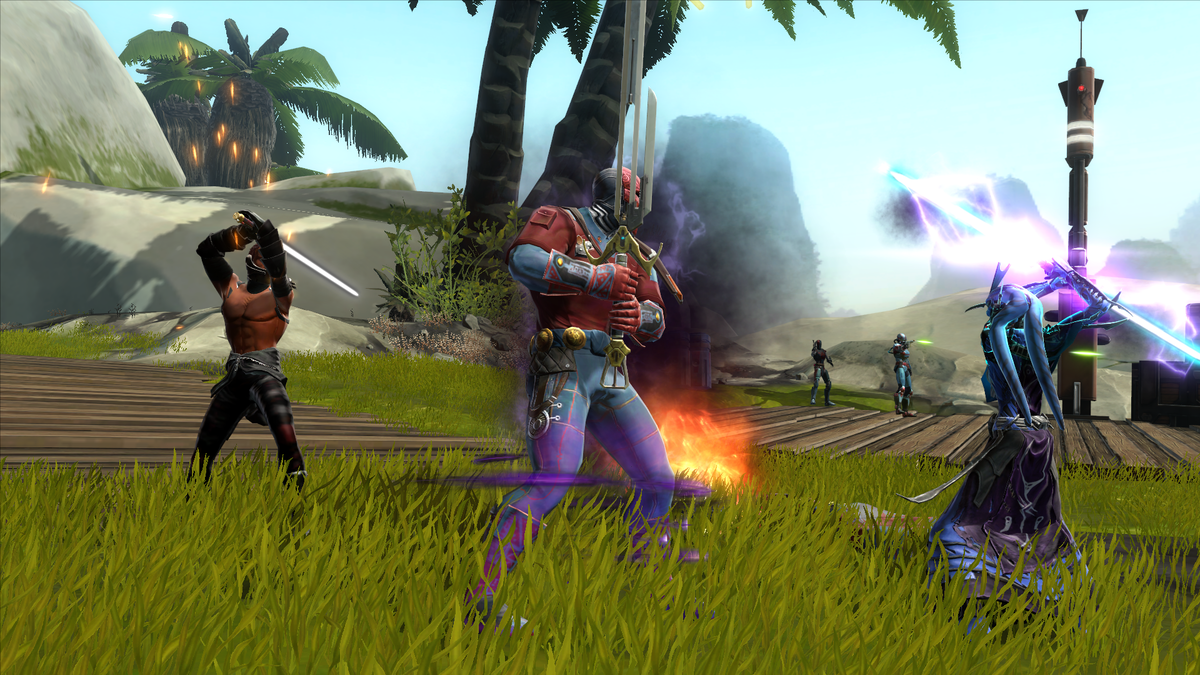 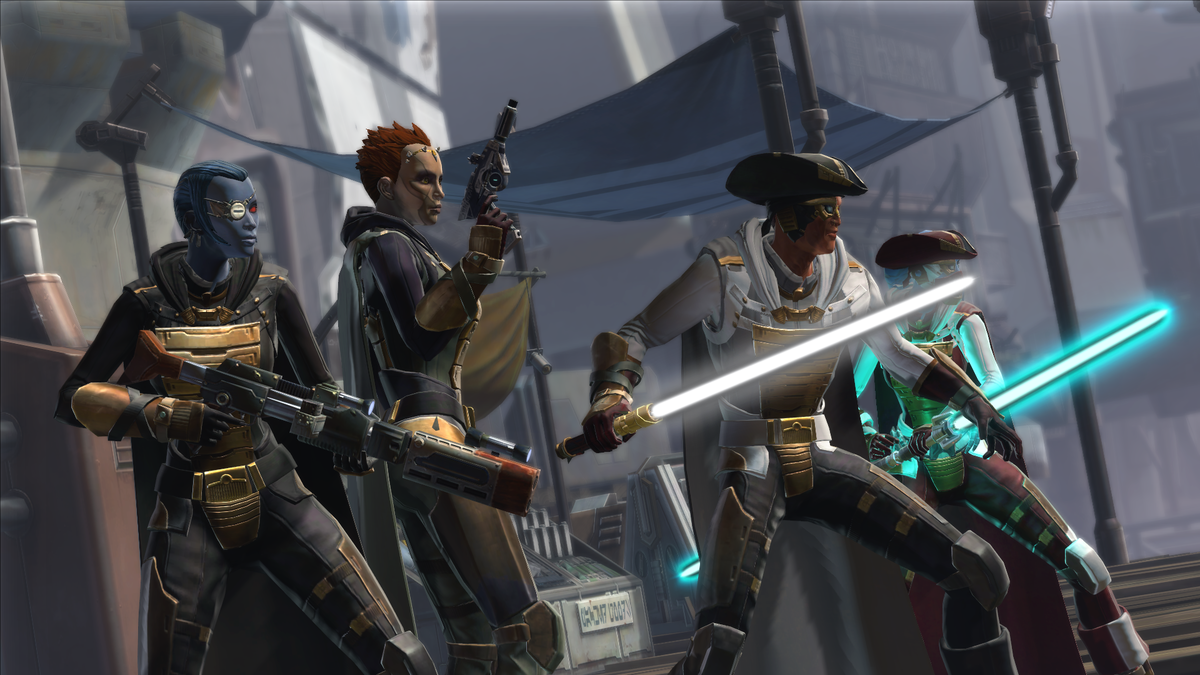 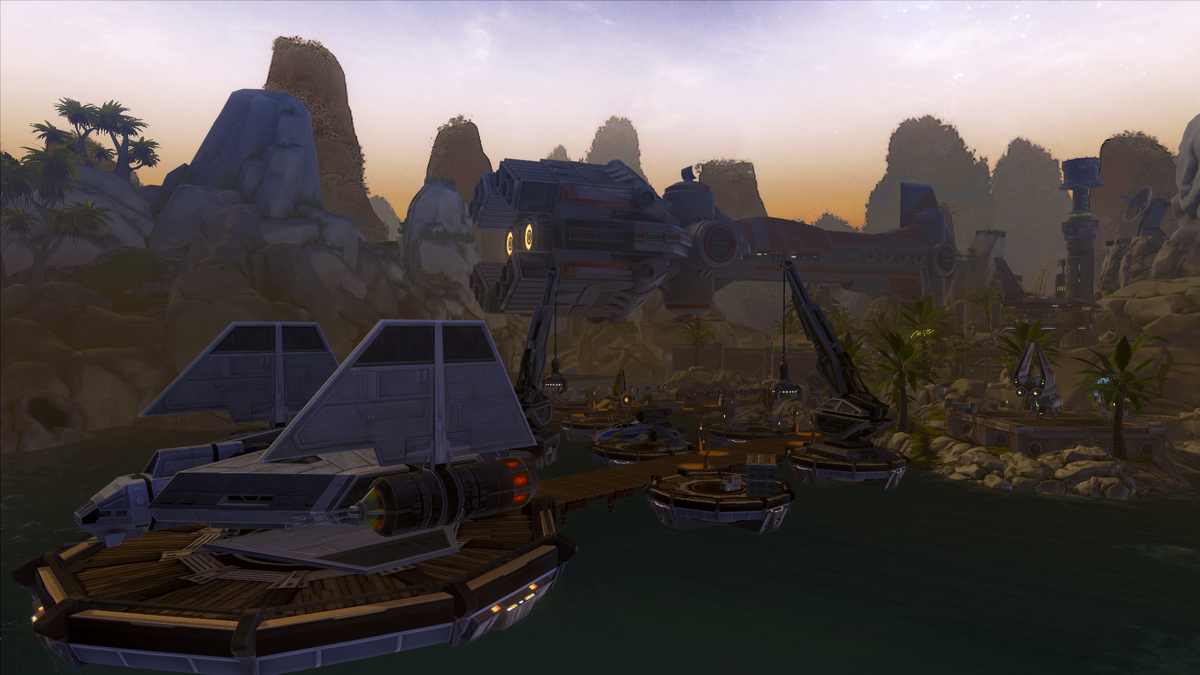 For more information regarding the upcoming expansion for STAR WARS: The Old Republic, head on over to the official announcement, or check out either my coverage or Jeff's coverage of the expansion's announcement. Jeff also did an opinion piece on the 12x XP event currently happening for pre-orders. For some new Revanite lore, check out this dev blog from the SWTOR website. I'm confident both Jeff and myself will have more coverage for Shadow of Revan as more information is revealed, so be sure to keep an eye on Ten Ton Hammer! If you thought we'd get through this article without the crazy goat lady bringing up the latest goat-centric meme, please. For no reason at all, here are some goats screaming the Imperial March. Enjoy.