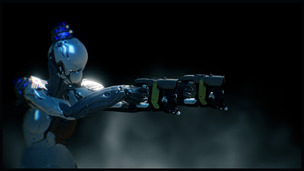 Ten Reasons You Should Be Playing Warframe
Warframe may not be the newest cooperative shooter on the block, but it remains one of the best. We offer up te
Feature
Warframe

Re-Animator: Getting Back Into Warframe
Re-Animator is a new, semi-regular feature in which Sardu revisits post-launch MMOs and social online games to
Interview
Warframe

With the next generation of consoles rapidly approaching, its hard to ignore how closely both the offerings from Microsoft and Sony are getting to just being PCs for couch gaming. And the fact that MMOGs and online free-to-play titles, something that has been nearly exclusive to the PC, is in a lot of ways being incorporated into the design model of the next gen consoles in a rather big way.

Just this week we learned that both DC Universe Online, which is already on the PlayStation 3, and PlanetSide 2, currently only available on the PC, will both be making the jump to the PlayStation 4. And it comes as no surprise that theyre not the only MMOGs and free-to-play PC games to make this jump. Digital Extremes also announced this week that their free-to-play cooperative space-ninja warfare title, Warframe, will also be joining the PlayStation 4 list, adding its name to the before mentioned two titles as well as Gaijins War Thunder.

You can check out the exclusive interview with Creative Director Steve Sinclair over at IGN for the full rundown. And if youre curious to learn more about Warframe, visit the official website or download it on Steam for free.

Ten Reasons You Should Be Playing Warframe
Warframe may not be the newest cooperative shooter on the block, but it remains one of the best. We offer up te
Feature
Warframe