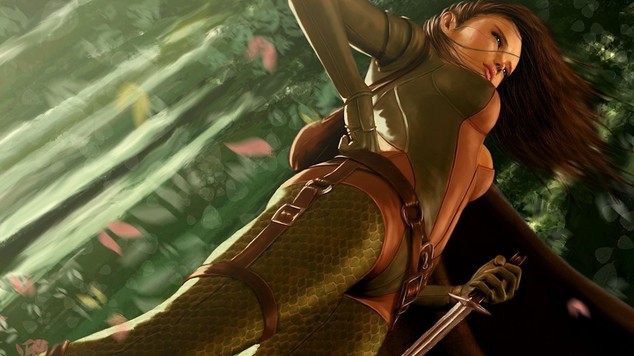 Here’s a confession—I find it a lot easier to be sociable online than off. Online, I’m an extrovert. I enjoy conversing with people in this setting. And I’m also an exhibitionist of sorts. I want what I write to be noticed, not only because my continued existence as a managing editor for EQHammer depends on you actually wanting to read what’s on our site, but because I’m proud of what I do and I want you to like it, to like me. There, I said it—I want you to like me, okay? I mean, I know in my heart that I’m generally a likeable person, but everybody needs a little validation now and then.

I feel vulnerable right now. I could use a hug.

In a few weeks, I’ll be heading to Vegas for SOE Live. I don’t attend a lot of the large gaming events because of a crippling anxiety provoked by large crowds. Teeming seas of humanity tend to make me hyperventilate while my heart races and I imagine that I’ll die any minute. Fun stuff! But SOE Live I can handle. It’s not packed wall-to-wall, and there’s no pushing, shoving or racing around. For that reason, and also because I’m all about the EverQuest franchise (and I can’t wait to see what’s revealed about EverQuest Next), I’m looking forward to this event.

But one thing still niggles. At SOE Live I’ll be among my “people.” I’ll be meeting, face-to-face, with folks I’ve only communicated with online before. I’ve gained a little notoriety among the Landmark and EverQuest Next communities, and yet I don’t live stream or do any real on-camera work. Unlike Twitch personalities such as Locksixtime or Spootyman or Ara, I’m hidden behind an avatar (#bootypants!) and some well-written words.

If you’ve seen the avatar and header on my Twitter page, I have a surprise for you—that’s not me.

I know, shocker, right? You totally thought that was me. Well, sorry to disappoint, but other than having reddish hair in real life I look nothing at all like those images. But here I am—ol’ introverted me—about to go to an event as a sort of D-list online celebrity (if you can call having a handful of fans recognizing my name D-list), and you don’t know me. I have to wonder, when you bump into me at SOE Live and see “Shayalyn” on my name badge, will you be surprised by the person behind the name and the avatar?

Team Hammer at SOE Live 2013. (I didn't attend that year. I probably would have been hiding behind a camera. I hate being photographed. Just look at these shameless attenion whores!)

I have a hunch that many share my low-level anxiety about going to an event and meeting people that we’ve only known online previously. For the most part, it’s cool. It’s fun putting faces to names, and attaching real personalities instead of just online personas. But there’s still that little fear that crouches in the back of our psyches—will they like the real me?

As much as I plan to walk into SOE Live feeling self-assured and knowing that I have always had interesting things to say about the EverQuest franchise, and that I’ve entertained the people (all 12 of you) who read my columns and follow me on Twitter, there’s always that twinge of self-doubt. Things might be different if I looked like my Landmark avatar (bootypants and all), but in reality I’m a 48-year old woman with fair skin, green eyes, and annoyingly fine, thin hair. I’m fat, and not in the lovely, zaftig Adele sort of way. (Believe me, anyone who grew up overweight is so keenly aware of this fact that it’s become part of their identity.) I’m on the quiet side, and sometimes I’m awkward and say things that I later kick myself endlessly for. (Add self-critical to my list of personality traits, and endless rumination to the list of flaws I’m trying to overcome.) I don’t really drink much beyond a social cocktail or two. (Unlike some of the SOE Live crowd who celebrate this annual fan gathering with 3-day hangovers.)

But I’m pretty funny, if you care to listen as I crack sarcastic jokes under my breath. I also like to think I’m smart. Not as smart as I want to be, but smart enough. And I’m nice. I once attended a gaming event (another quiet, low-key one) in Seattle with a group of coworkers, and we were walking back to our hotel after a pizza dinner. A homeless man sitting on a square of cardboard on the sidewalk reached out to one of my coworkers (long since departed from Ten Ton Hammer, so I guess I can talk about him anonymously), indicating the Styrofoam box of leftovers he was carrying, and said, “You gonna eat that, man?” My coworker yanked the box away and snarled, “YES!” It forever changed my opinion of him, and not for the better. I would’ve handed over my leftover pizza, and probably a few extra dollars if I had them to spare. Whether you think me naive or kind (maybe both) depends on your perspective.

You Don’t Care, And Neither Do I

My fears about how I’m perceived are probably unfounded. And so are yours, if you have them. And most of us do. We’re not sociopaths, so we care about what people think of us to varying degrees. The trick is to not care so much that we abandon our own identities in search of some imagined ideal.

But as concerned as we are about what others think of us, the truth is that people mostly don’t care. We’re in our own little worlds, dealing with our own little realities. Most of us aren’t sitting around waiting to judge people, and those who do judge likely lead sad enough lives that we should feel pity for them rather than lend credence to anything they might have to say about us.

So, if you’re one of those people, like me, who’s self-conscious about how you’re perceived—relax. Keep this column in mind when you make the acquaintance of people you’ve only ever met online. Have some fun. I know I’ll be enjoying myself at SOE Live. And remember to be yourself—no one else is qualified.