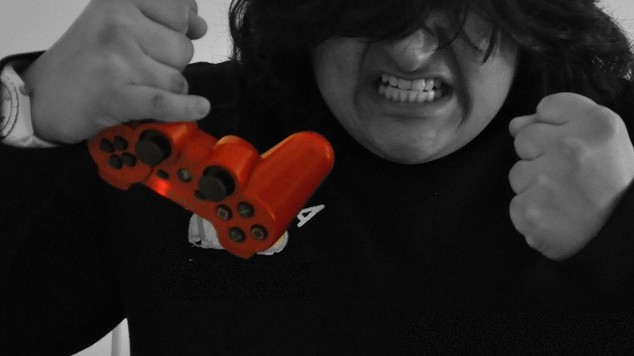 Competitive by Nature, Casual by Necessity

One Christmas when I was a kid, Santa left a shiny Atari 2600 under the Christmas tree. It was this glorious black box with a wood veneer panel. The controller, attached via a wire short enough to make you literally have to sit in front of the TV set (directly in the You'll Ruin Your Eyesight Zone), was nothing more than a joystick and a shiny red button. Before that Atari entered my life, I hadn't been fully aware of how competitive I was. I mean, the clues were there - I was contemplating sabbotage for the front runner in the 5th grade spelling bee, for chrissakes - but somehow I didn't put them together to form a complete picture of my own cutthroat nature until The List appeared on the refrigerator.

You see, my cousins (one was my age, the other the same age as my younger brother) also received an Atari for Christmas. My uncle was in the Coast Guard, so my cousins lived a couple hours away on Lake Michigan, but we'd grown up spending our summers together. Much like siblings, we were embroiled in an unspoken battle for supremacy. And so, in an age before online play made claiming bragging rights as easy as logging in, we had The List to keep track of our scores in games like Space Invaders and Asteroids. Scores added to The List were verified by independent third parties (namely our parents, who may or may not have been amused by this and may or may not have been independent or, for that matter, third-party). A new high score meant a long distance telephone call to the defeated player in which we said whatever late-70s slang amounted to, "Hah! In your face, sucker!"

It was decided that, to be fair, the cousins would be ranked by age - I would battle against Richie, who was 3 months my junior. I obsessed over The List. The version that graced our refrigerator seemed to bleed red Sharpie where I'd crossed out Richie's name and replaced it with my own. Whenever my uncle or aunt called to add Richie's high score to The List, I found myself doing everything from lying about the status of my homework to telling my friends I had other plans to skipping dinner so that I could get time in front of the Atari. I would not rest until that score was defeated! It was my sworn mission to take my cousin - the kid I'd grown up with and considered one of my best friends in the world - down in flames.

Sadly, my cousin no longer plays video games. He wouldn't know an Xbox One from a Nintendo 64. Looking back, I have to wonder if I had something to do with his decision to set video gaming aside. It's possible, although this never occurred to me then and rarely occurs to me now, that some people don't like to stay locked in an endless cycle of one-upsmanship. The rivalry was fun for a while, but eventually Richie didn't seem to care much about it.

"Hey, cuz! When are you gonna beat my high score?"

There'd be silence on the line for a bit and then he'd say, "Nah, I just don't feel like it. Hey, do you have the new KISS album?"

On my cousin's side of the family, the Atari 2600 one day went into a closet never to be seen again. I imagine it ended up at a rummage sale, along with a handful of cartridges for once beloved games like Asteroids, Donkey Kong, Centipede and Pitfall. In my home, however, my mom scraped and saved (at a time when money was scarce) to get us whatever new console released that Christmas. I played games until I moved out at 18, and then I had neither the time nor the cash for a console of my own.

How to Lose a Guy in One Date

Even so, the competitive nature runs deep. The List may have languished, but its spirit reared its ugly head one fateful night when I went out on a blind date with my best friend's boyfriend's roommate, Ben. He was a cute, happy-go-lucky sort of guy. I liked him. We were hitting it off well until we got within proximity of a pinball machine.

He dropped in some quarters and asked if I'd like dibs. I encouraged him to take the machine first, saying that I'd rather watch him. You see, there's a strategy there - if you observe the other player first you can suss out exactly what the machine demands of you in order to rack up a killer score. So, I watched Ben, feigned being uber impressed, and then stepped up to the table myself. I remember giving him a sly backward glance before I jammed the heel of my hand into the plunger, dinking the ball into the first target. Then I caught it on the flipper, held it for a moment, and flung it toward the first ramp. Next, a center bullseye, and then a ramp with a spinning gate and... ding ding ding!

Lather, rinse, repeat while hip-checking and leg nudging and almost but not quite tilting the machine. Finally, I raised my hands in the air and said, "Whoops! I suppose I should let you have a turn."

I failed to tell Ben that my parents had owned a small ski lodge when I was young, and that I'd grown up playing the pinball tables on endless repeat while my mom cleaned or my dad did repairs. He pretended to be amazed, but I could tell he was either annoyed, embarrassed, bored or a toxic combination of all three. At the end of the date, I left him my number and an invitation to call. He never did.

About 16 years later, my family was gathered around our new Xbox. The kids and I had gone out and purchased Gauntlet, plus a couple extra controllers so the four of us could play together. My son was about 8, my daughter 6.  We even got my husband to play. We'd sit together in the living room, me the Green Archer, my husband the Red Wizard. (The kids were the Knight and the Valkyrie, but since they weren't in my age group they were not the targets of my obsession.) Our gaming would sound something like this:

Me: Kicking a-... butt and taking names, kiddies!

Boy Child [such a pain in the ass]: We should try to cooperate....

Me: We're winning. See? We won! And who's got the highest kill count? Who? Greeeeen Archer!  Hah! In your face, suckers!

Truth be told, even back in 2002 I was clinging to the last vestiges of my ability to pursue winning at any cost. We all like to win, but life changes our ability to do it consistently. I had a family and responsibilities, so I couldn't invest in being the top of the food chain. I was an officer in my little EverQuest guild, with a level capped character and an epic weapon, but I was in the throes of learning to accept that I would never be among the uber elite. I would not be in a top raiding guild. I had to be satisfied with my own little family-style guild dungeon crawling and collaborating with larger guilds every now and then to take down a dragon or two. While others were getting their keys for the Plane of Time, I was coming to terms with the fact that I didn't have time of my own to invest in being as hardcore as I wanted to be.

It all came clear to me one day when my daughter came home from school with a project she'd made. She had been tasked with drawing pictures of what her parents did for a living. My daughter proudly presented a picture of my husband wearing a tie and sitting at a desk. He worked in IT management at the time, so the picture fit. Her childish printing said:

The picture of me showed me hunched over a desk in front of a computer. That would have been apropos, too, since I ran my own business - a website providing workshops for aspiring writers - from home. It looked like this:

And that was the fatal shot to the chest for my quest to be a gaming badass. My days of owning The List, scoring the multiball, and wielding the BFG were over, at least for the most part. My own daughter didn't see me as a business owner, or a mom who took care of hearth and home; when asked what I did for a living she said: "MY MOMMY PLAYS EVERQUEST." I was embarrassed (and even more so when I had to explain what EverQuest was at the next parent teacher conference). I didn't want my daughter to see me as someone whose desire to be the best in a virtual world was interfering with her ability to be the best mom, the best wife, the best person she could be in the physical world. On that day, I decided that I would forego my need to win at any cost and learn to be satisfied with the journey itself. On that day, I became a casual gamer. Later, I found my way into a career that would let me do two of the things I enjoy most - writing and gaming - and my kids (teenagers now) think I'm a badass without the high scores.

That's not to say that my competitive nature doesn't get the better of me every now and then. In fact, I wonder which Ten Ton Hammer staff member's column attracted the most readers last week. Perhaps I'll go take a peek....

Hah! In your face, suckers!