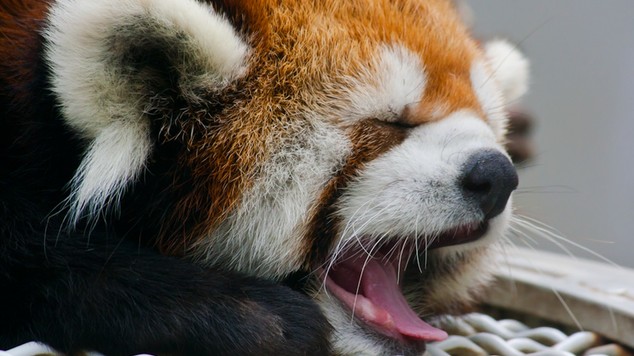 Don't read this column. Especially don't stop by the middle of each week to take mind candy from a total stranger (probably in a Ford Econoline van with a turtle top.) But if you can't resist, bookmark this.

That's a red panda yawning in the image header, in case you're wondering. I'm not saying he has insomnia, but sleepy red pandas are awesome, and I couldn't find a better image, so... you're welcome. On with the show.

I’m not telling you something you don’t already know, of course, but some of us are more afflicted than others. For me, it’s pretty routine. Some nights, it takes me hours to fall asleep, and I find myself passing the time making little shadow puppets with my hands in the dark. It’s a little like this, but without the funky music.

Of course, there aren’t that many people in my bedroom. That would be weird. Or... well, let’s not go there, shall we? This is a family show. Sort of.

The alternative to shadow play is singing some song on an endless loop in my head. Often the song is the most inane thing my mind can conjure—apparently, the more I hate the song the more my brain seems to want to sing it for me. But sometimes, it’s a really good song. For a while there, after I’d seen a local production of The Phantom of the Opera with my good friend, I was hearing the voice of the Phantom raging:

Down once more to the dungeons of my black despair
Down we plunge to the prison of my mind
Down that path into darkness deep as hell...

A few of my Twitter followers have cued in on my issues with insomnia. Occasionally, I’ll ask them to tell me a bedtime story. They suck at it. Rather than helping me sleep, they tend to keep me awake because I’m editing the shit out of their responses. You guys really need to work on developing a strong narrative while eliminating syntax errors and redundancies. There’s a lot you can do with 140 characters, but I feel like most nights you’re not even trying.

On those nights when I can’t sleep, it would be awesome if I had something worth staying up for. Lying in the darkness staring up at the ceiling has its charms, sure, but wouldn’t it be great if there were some heroic purpose to staying up late?

Sleep is for the Weak

Back when I was playing EverQuest and MMOs were brand new to me, losing sleep didn’t seem like a big deal. I would wake bleary-eyed at 7 AM to get my kids ready to catch the bus for school because I’d only just snuck off to bed a couple hours earlier. It was my habit to play EQ until the first bird started chirping outside my window, and then crawl into bed before my husband woke up. When friends in other time zones commented at how late it was for me, and asked why I wasn’t in bed, I would say what we all said back then:

“Sleep is for the weak!”

It was our battle cry, wasn’t it? For some of us, I guess it still is. But lately I feel more like sleep is for the lucky. Just the other day I was commenting to my doctor that I was resistant to all kinds of sleep medication from the over-the-counter stuff (Benadryl, people. Buy the generic, because it’s the same active ingredient as Sominex at half the cost. Pharmaceutical advice is just another service I offer *) to Trazadone to Ambien. Only after I’d said it did I realize that I sounded like a prescription drug junkie asking for a better fix, something with just a little more kick.

A Game Worth Staying Up For

Maybe the reason I now actually mind not sleeping is that I’m not exactly in my early 30s anymore. Or maybe it’s because years of rattling around my old house until the sun comes up is getting old. Still, I’d sacrifice it all to Hypnos for an MMO worthy of an all-nighter. It’s been a while since a game had me in its clutches like that, since an MMO not only gave me something to do, but compelled me to forego my pillow (it’s so soft, and damn if it isn’t calling to me this very minute) for the excitement of finishing that story line, or slaying those monsters, or simply immersing myself in a world other than my own, where there are no bills to pay or obligations to uphold, but only endless adventure.

I’m hoping EverQuest Next will hold true to its predecessors and be the game that will keep me willingly awake until I realize I’ve just had a small psychotic break with reality because our minds (let alone our bodies) were never intended to operate on 36-hour shifts.

Is there an MMO that’s keeping you up late right now? Are you looking forward to one in the future? Share a comment about it. In the mean time, here’s to extended-release Ambien and mad shadow puppet skills.