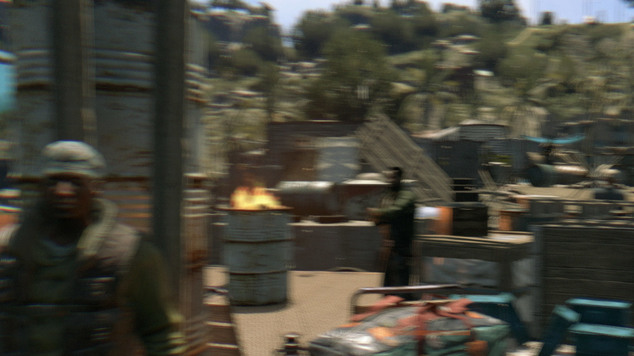 Layman's PC Graphic Settings Terms - FoV / AO / DoF / etc.
A layman's look at graphic settings and what to do with each of them.

Welcome to Respawn Respawn'd (or Respawn). I'm moving more into interesting gaming topics and less meta discussion, so today we're going to talk about the BS that is graphic settings and the amount of weird facts spewed online and mystical voodoo associated with them.

There is a lot of graphics settings out there that are mystery voodoo for some. For others, they're a way of life and you know it too because they let you know. It's like that guy or gal who just can't stop talking about FOV and you're like ugh please stop and they won't. But if you're wondering what those terms mean, let me break them down to you in some easier to understand than paragraphs of 1337 speak.

This is super dumbed down explanations and in no way the real explanation or perfect settings or whatever. If you want that, head to Wikipedia for the super technical facts or Reddit to hear 14 different ways a 75 FOV is standard practice and the cause of the decline in gaming in the same breath.

Seriously video cards are so badass now that there isn't a lot of settings to tool around with beyond "best" or "highest" or "I'm lord of gaming look at my sweet rig" because honestly I don't know, people may disagree with me, but my three year old midrange card is still playing games like Dying Light on max settings, without lag, and anything that I change or edit or whatever is to make the game look good to me, more so than for performance.

However, whatever changes you may want to make, I always suggest making the game look the way you want it to first, then turn things down to cut out any lag.

Field of View - FoV - THE REASON THIS GAME SUCKS

Okay so FoV is how many degrees of viewing that you can see. I've read between 75 and 90 is where most players like it, but many will swear at 100 or above (or exactly 100). This is a big deal in shooters, because the amount that you can see on the screen decreases or increases how close things are in the distance along with how much you can see to the left and right of you. So at 55 FoV, the distant objects are VERY close but you can't see much to the left/right of you, whereas at 200 they are VERY VERY far away, but you can see the entire field of view around you.

This is a setting that MOST games actually get right for their game, but if they don't provide a slider or if the default isn't high enough, they're going to rant / go crazy. Sometimes it's justified, sometimes it's just a reason why they suck at aiming.

This is personal preference to the extreme and anyone saying otherwise is crazy. You may like yours low, you may like it high, who cares set it where you want it and if the game locks you into one and isn't some hyper competitive shooter tournament where FoV is regulated then it's time to whine. MMOs are the biggest offender on not letting you set FoV.

Low FoV can cause nausea in some players and causes motion sickness. This is why a lot of players of older games which may have used smaller FoV would get motion sick. This option is changable in most games, even if it's not in the settings, through console commands or ini edits. I don't believe in it.

This is a problem when a game is displaying a higher framerate than your monitor or whatever who knows it's magical voodoo-ness.

This is how good a texture looks. If you have a video card made this era or near it, always set this to highest. It uses ram on your video card, so if you don't have a lot (i.e. card made 100 years ago), it probably won't like it. You'll see the effects of this mostly in games like Dying Light where they use textures on the wall to point to shops. I prefer this as high as possible.

Shadows for my video card make it chug, so I usually disable them, but if you have a newer video card then the various options are going to make shadows look better, but at a performance hit. The performance hit is per game.

This removes the jaggies (artifacts) on edges, since pixels are square and reality isn't. You'll instantly know the effect of AA by turning it off and looking at what seems to be a game made 20 years ago due to the artifacts. AA universally makes games lag since it blurs all the edges of everything, but even a small amount goes a long way in helping your game. SMAA is a really good performance based version of AA.

For real most modern video cards can handle AA like a champ, turn it on and give it a try. Even older

This is some stupid blur that games add to the distance to simulate you looking at objects up close and the ones in the distant blurring it out. This is a total personal preference thing and like motion blur I turn it off.

This is when you move your camera it blurs everything because??? I don't know, I turn it off along with DoF, but if you want more lag and fun blur effects when your character turns its head, turn this on.

Makes textures "pop" by rendering additional models for things like bulletholes and bricks. It's a nice visual effect.

The explanation for this one is too hard for me to figure out in laymens terms and the Wikipedia entry isn't helping. This makes textures look better at a distance due to different viewing angles and you should have it on.

Another one that's way too hard for me to explain, but it basically adds cool shading effects that takes into account the character's position and the way light would shade different objects (is light blocked?) and shadows where two things meet. It's really neat when turned on, but like anything relating to shadows, is a big drain and can lag you out.

In modern games, SSAO and HBAO and other versions of AO will not lag your game as much as DoF or Motion Blur.

This is how far off in the yonder you can look. Turn it to where you don't get any performance lag but can see as far as you can in the distance.