Loading... Pure Dynamics
<p>Loading... is the premier daily MMOG newsletter, only from Ten Ton Hammer!</p> <p><strong>Welcome to the
Column
Miscellaneous 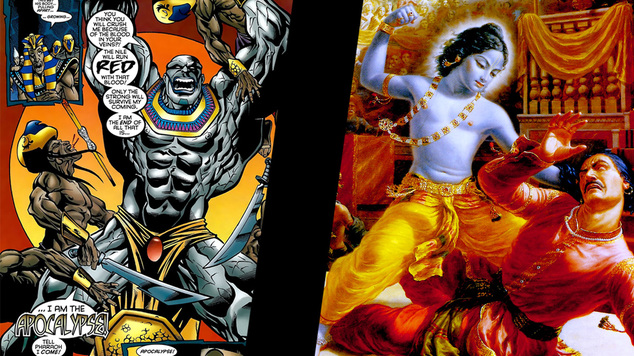 During the recently debuted trailer, the primary villain "Apocalypse" alights to the fact that in his past he has been referred to as a number of famous individuals, including the Hindu deity Lord Krishna - offending some notable Hindu believers.

Perhaps it is the grand stage of the film, now that Marvel Cinematic Universe has established itself as one of the premier movie settings in the entire world with its slew of block-buster hits over the last ten years.

It surely can't be the character reference alone, as Apocalypse has long been established (since the mid-nineties) as a seemingly all-powerful villain who has existed quietly (and not-so quietly) throughout history. He was originally created on the concept of being the X-Men's greatest super-villain (the self-proclaimed son of Baal himself). Seeding his history deeply through time has always been an important part of his back-story, and plays a huge role into how he is interpreted by modern superheroes and their knowledge of historical events.

Apocalypse as been associated with various Egyptian gods and deities (and those of other religious affiliations) for nearly two decades; yet that established back-story has never been an issue up until now.

I can understand why religious devotees might be upset that one of their revered icons is being affiliated with an evil character - but the entire concept of Apocalypse is the logical inversion of that. He, as a character, has associated himself with "godly" things because of his fictional powerset (which is pretty godlike - having the ability to manipulate matter pretty much at the atomic level).

The very fact that he would have associated himself with the mythology of Hinduism is more a nod of respect to the idea that Krishna is viewed so highly among world religious (that one of the greatest super-villains of all time would claim to be associated with his deity-level power).

Comic books are fictional; and no religious group should take that out of context.

These artistic works are not historical revisionism; nor are they an attack on any particular religious group. They are an entertainment medium, and they draw upon real-life history and mythology in order to provide the necessary "suspension of disbelief" (Google it if you don't know what that term means). A character of Apocalypse' age and power would have to be associated with the world's most historically powerful and influential people/beings/icons.

That's just the nature of who the character is, and it has been that way for almost 20 years. Yes, you read that correctly; twenty years!

So why the sudden displeasure?

I believe it's a mixture of things...

Is Fox's Script the Real Victim?

Obviously the stage is enormous right now. This latest Marvel-based movie is standing atop a mountain of viewership compared to mere thousands of readers who've read the original comics about this character (and thus know of his religious affiliations).So it's bound to get more acclaim, and also, criticism.

Additionally though, Americans in general have grown increasingly restless and are more easily offended than ever before, it seems. We are in the age of information, where anything can spread anywhere, instantly. The reactions to controversial topics can create viral backlashes with unforeseen consequences in the blink of an eye.

The recent X-Men: Apocalypse trailer is a testament to that - and who knows how Marvel and Fox will respond to this latest outrage.

This internet-shrouded world is a perilous one to converse in. You just can't say anything these days without offending someone somewhere, it seems. That, or you've got a powerful political entity that wants to latch on to another victim of "political incorrectness" to push their own agenda.

It doesn't take long for everyone to know what's been said, and that knowledge is often a double edged sword. No one knows better than Marvel that "with great power, comes great responsibility"; but apparently 20th Century Fox never got that memo...

The good news is, at least we can be sure there are a few people out there who already detest one of Marvel's most iconicly hated villains.

Looks like they're finally doing something right with the X-Men franchise after all!

Loading... Pure Dynamics
The social implications of online gaming, no doubt, reach far. The medium itself exposes us for the social crea