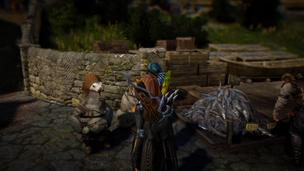 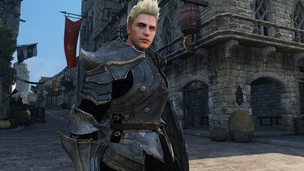 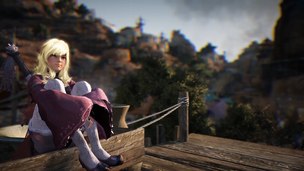 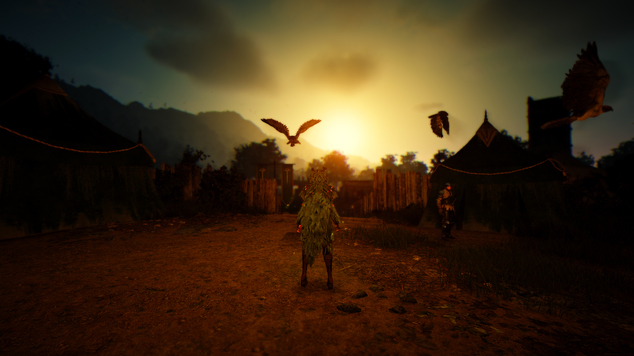 Black Desert Online is a great looking game and will likely test many computers when it comes to maximizing frame rates. Despite that, there’s a generous set of options available to customize how the game looks and it’s relatively well optimized. Pearl Abyss have used a variety of graphical techniques to make the game look good when it’s primarily the result of filters and blur effects. In this guide and similarly to those I’ve done in the past for games such as WildStar and Witcher III, I’ll try to keep things as simple as possible. The aim: improving your frames per second, while maintaining graphical quality.

FPS range from 45 to 60 depending on player number/location.

By pressing Escape, and selecting Settings, you will be able to access the Display Settings for Black Desert Online. As the first tab under “screen” there are a variety of settings available and on the lower right it will display your frame rate.

Full Screen: Forces Black Desert Online into Full Screen. By choosing this option your ability to alt+tab to your desktop is limited as each time you do it, you’ll be asked to full screen the game again after minimizing. There’s no frame rate gain using this option and for convenience, I’d recommend Full Screen Windowed.

Full Screen Windowed: Full Screen Windowed allows Black Desert Online to be played Full Screen, without bordering, but with the ability to quickly and easily alt+tab to your desktop. Doing this won’t affect the game and you’ll be able to switch between the two without any issues. Choosing this option results in no loss of frame rate and is my recommended choice.

Windowed Mode: Played in a window (you’re effectively playing it on your desktop) you can quickly switch between your desktop programs and the game. It looks fairly awful with the border and has always felt relatively redundant due to the speed of Full Screen Windowed. 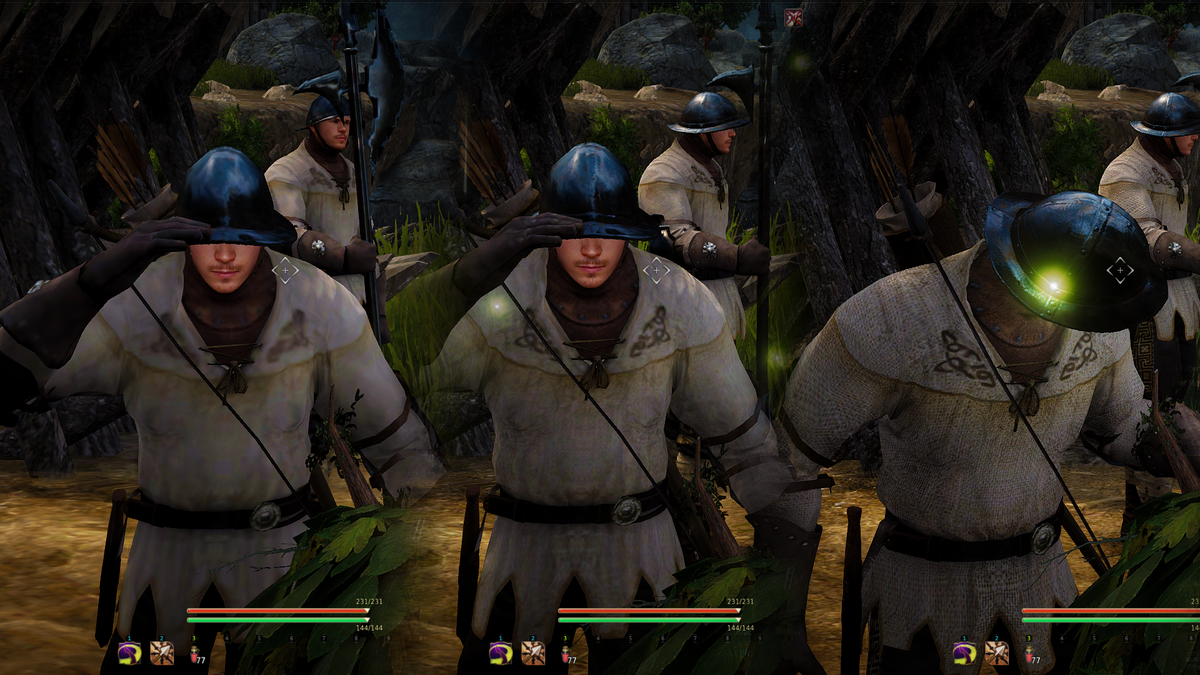 Low, Medium and High (left to right).  Open in new tab to view as full screen.

This option directly affects characters in the game world, as well as textures on terrain and objects. With three options available (low, medium, high and ultra) it makes a huge difference to the game world and those in it. Interestingly, making adjustments to the options seems to have no impact on your character, only NPC’s and other objects. Although it will have some effect on your frame rates - certainly in busy cities - for the most part I noticed no difference and my frame rate sat happily at 59-60 in the Western Guard Camp regardless of its setting. Between High and Very High there’s no noticeable difference but a significant one between low, medium and high. If you can, use high for the best of all four options. 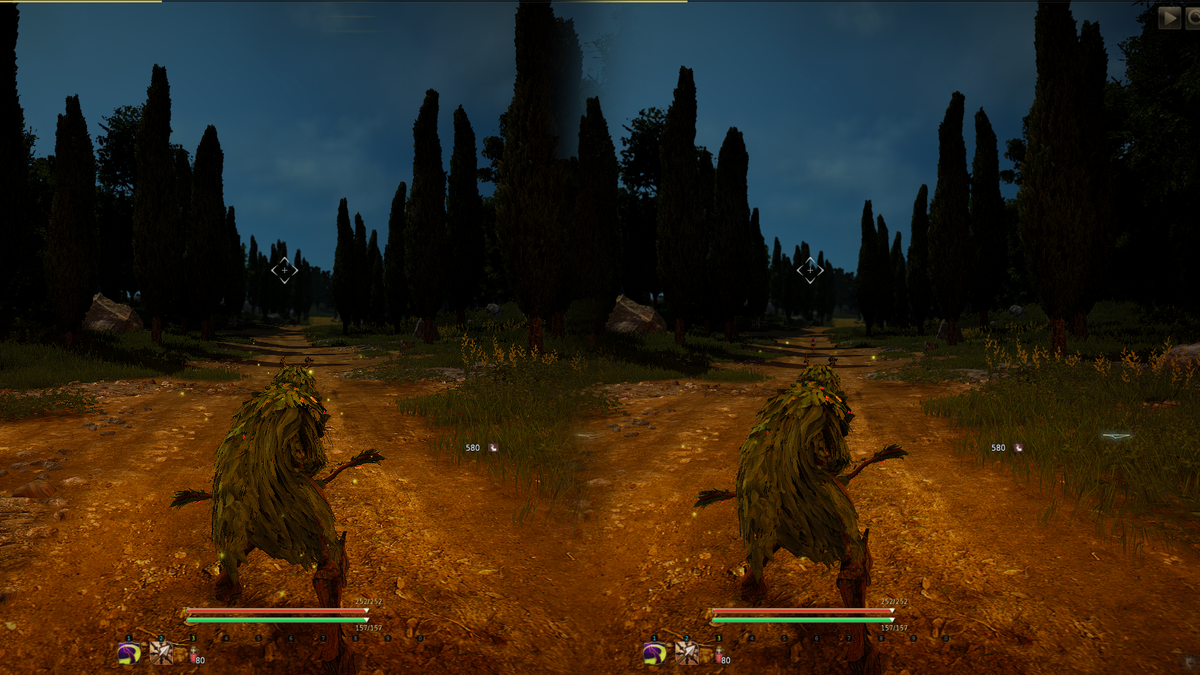 Antialiasing off (left) and on (right). Open in new tab to view as full screen.

Anti-aliasing: Effectively smoothing out “jaggy” edges on objects and characters, the differences between off and on are pretty noticeable. I’d recommend you turn it on and although there’s no ability to customize how much anti-aliasing you want (x2, x4, x8) the default is fairly effective. I noticed no frame rate loss with it on.

Depth of Field: This only effects cutscenes and when you hide your user interface (ctrl+u). It’s purely down to your own taste as to whether you like it on, but it is does look rather effective and is intended to focus your attention during specific moments. It has no impact on frame rates.

Show Blood: If you’re squeamish, turn it off. If you aren’t, leave it on. The blood splatter in Black Desert Online looks rather good and it has no impact on your frame rate. 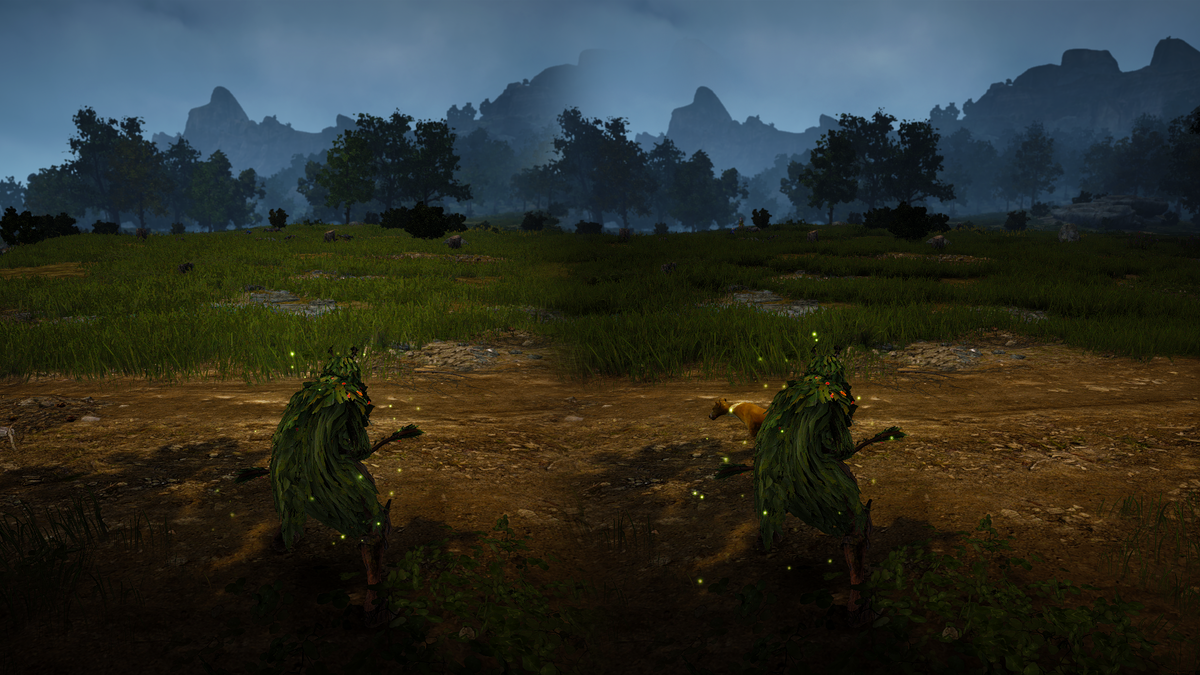 Without (left) and with SSAO(right).  Open in new tab to view as full screen.

SSAO: Known as screen space ambient occlusion, it’s a rendering technique for efficiently approximating the computer graphics ambient occlusion effect in real time. Simply put and certainly in Black Desert Online, it makes shadowing against objects and terrain look good. Visually there’s a huge difference in how it makes the game look and it’s a must-have and for the sake of a few frames (roughly 2-3) it’s well worth having.

Show Blood On Screen: Doing what it says, this option allows things such as blood splatter to strike the screen when you take damage or hit enemies. It makes combat that bit more visceral and it’s worth having. 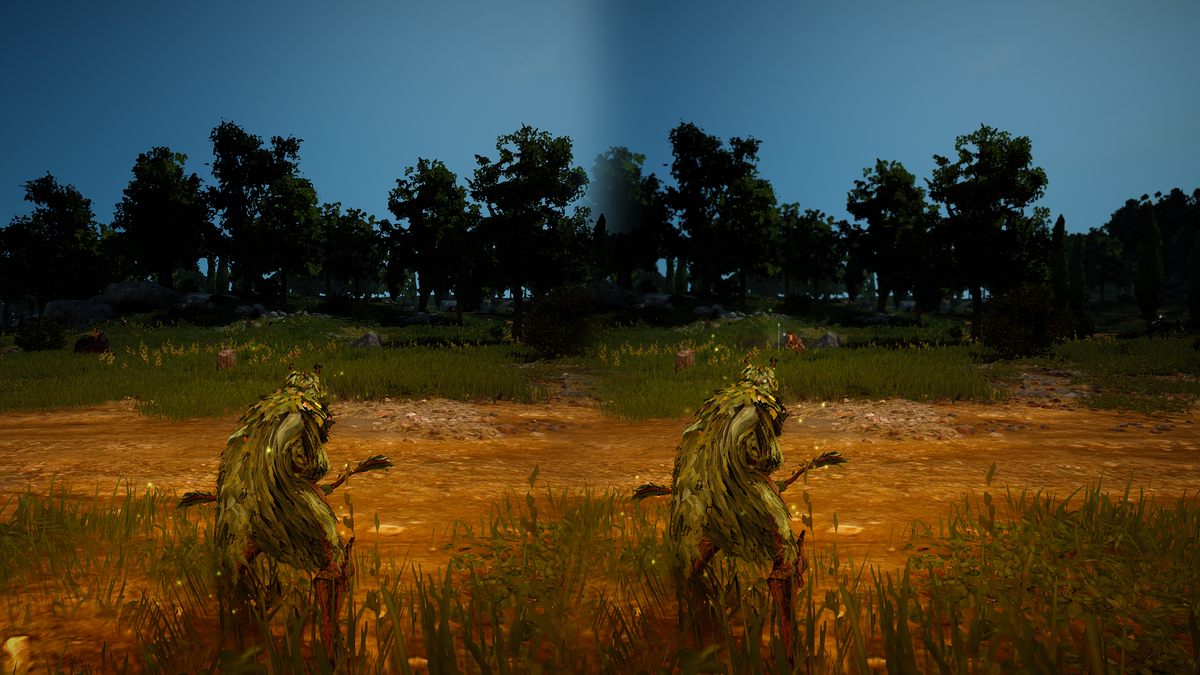 Without Screen Filter (left) and with (right). Mostly noticable on trees in the distances and around their edges. Open in new tab to view as full screen.

Screen Filter: This adds a blur effect to distance objects. It adds no real strain to your hardware but reduces some of the harder edges on distant scenery. Turn it on.

High End Mode: This is the one setting that has a huge impact on your frame rate. It effectively halves mine and yet its benefits aren’t entirely clear. Although I can’t see any differences visually (in terms of graphical quality) the one thing it does impact on is draw distance and it reduces objects “popping” into game from afar. If you’ve a very good computer and graphics card, I’d highly recommend you turn it on. If you don’t, you’ll notice pop-up but you’ll also have much better frame rates.

Show Attack: A simple option that adds a very minor graphical prompt when attacked or attacking. There’s no impact on your frame rates, so it’s entirely down to you. I leave it on. 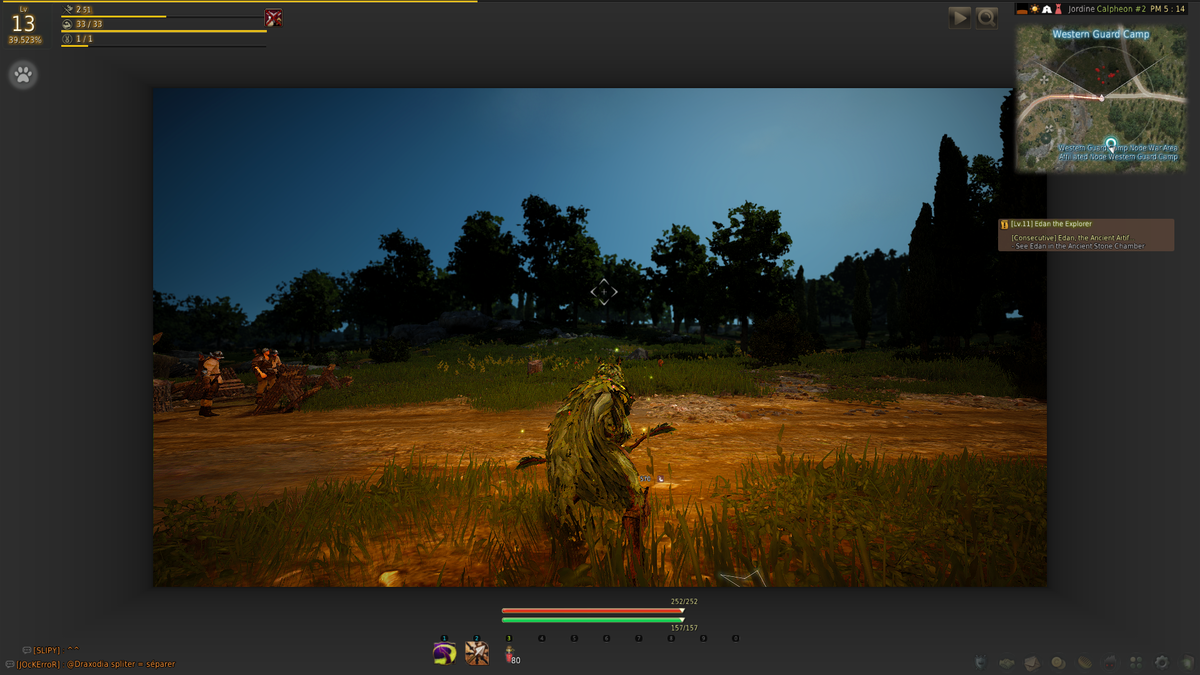 Crop Mode: This effectively allows you to reduce the resolution of Black Desert Online into its own seperate window, within the screen. You can make the game screen as small as you like, with smaller cropping increase your frames per second. It will help your frame rate, but it’s not particularly great on the eye as the game then has a border. I’d honestly recommend you leave this alone.

Upscale: In simple terms, Upscaling downgrades your graphical quality while keeping it at the same resolution. You’ll still be running the game at, say, 1980x1080 but it’ll be rendered much lower (say 800x600). It makes the image very poor, but does improve frame rates considerable. One to avoid unless you like looking at pretty poor graphics.

Remove Other’s Lanterns: It does what it says on the tin. At night time people get their lanterns out and it can cause heavy lighting effects. I have this turned off because I actually dislike seeing everyone light up the area, and it reduces any frame rate loss because of it. The game looks so much better with it off.

Remove Distant Player Effects: Honestly, unless you like seeing the spell effects of other players from far away, just turn this off. It’s an unnecessary strain on your computer for no reason.

Remove Other’s Effects: This turns off all player effects. It will improve your frame rates, certainly in starter areas (so it’s worth considering then) but for an overall “feel” I’d recommend leaving it on. It’s somewhat bizarre seeing a Wizard cast spells but seeing nothing appear, even if you’re next to them and as a result, can kill your immersion. 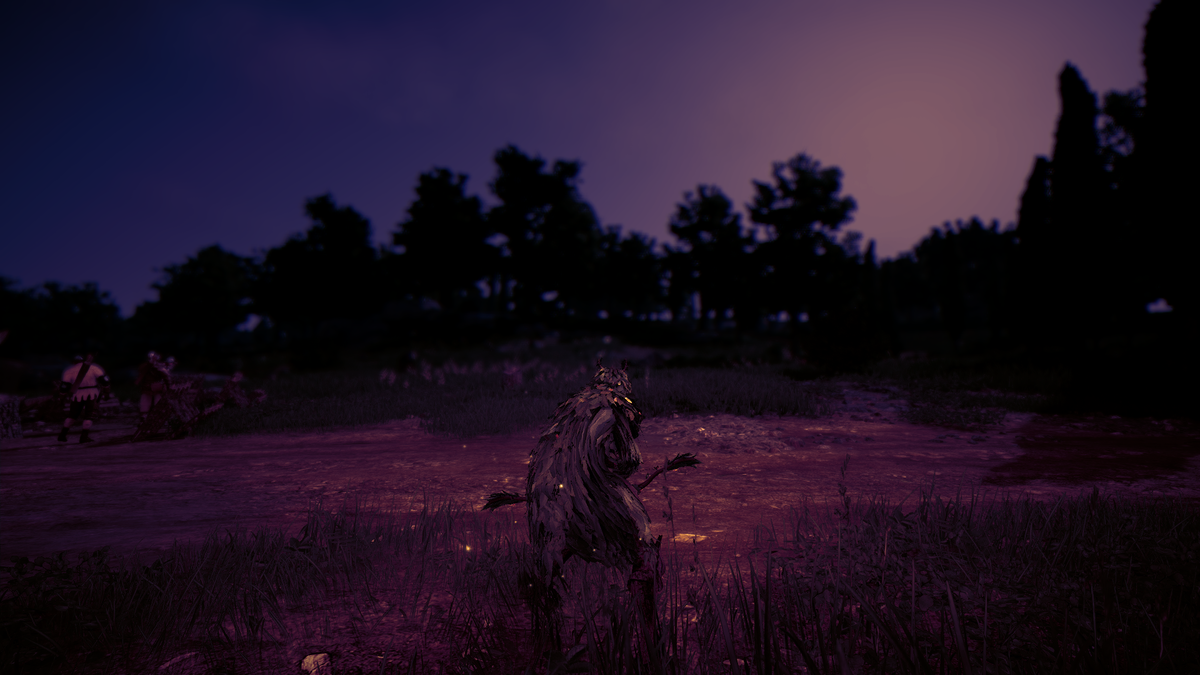 An example of the "evening" Photo Filter.

Photo Filter: This acts similarly to SweetFX or similar programs and adds a filter to Black Desert Online. The default filter (Vibrance) is undoubtedly the best although having “none” also still looks good.

Vision Range: Technically your field of view, increasing this allows you to zoom out much further and brings the default camera further back. I set mine to maximum.

Anti-Aliasing: Your GPU's core speed will make the biggest difference here. Have a good graphics card? Turn this on.

Depth of Field: ON

Show blood on display: ON

Depth of Field: ON

Show blood on display: ON

Have some tips on how to improve Black Desert Online's frame rates? Know some tweaks? Let me know in comments below and I'll add them here.