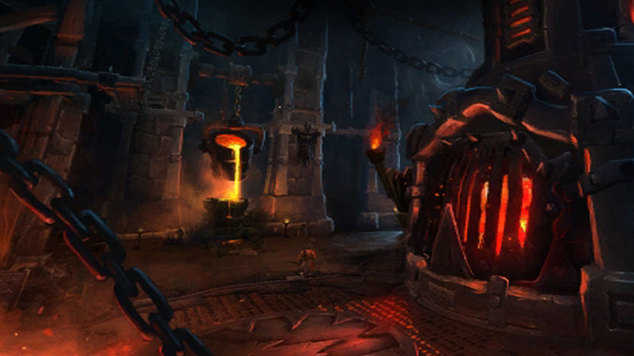 The Slagworks is the first wing of the World of Warcraft: Warlords of Draenor raid called the Blackrock Foundry.  It is the second raid of the expansion and features four wings with a total of 10 different boss encounters.

Gruil is the first encounter in Blackrock Foundry and as a first boss, his mechanics are fairly simple to deal with.  He is more about getting into the raid and a check of basic raid skills (get out of damage effects) as well as a DPS check by way of a 6 minute enrage timer. The encounter is made up of two phases that alternate back and forth. 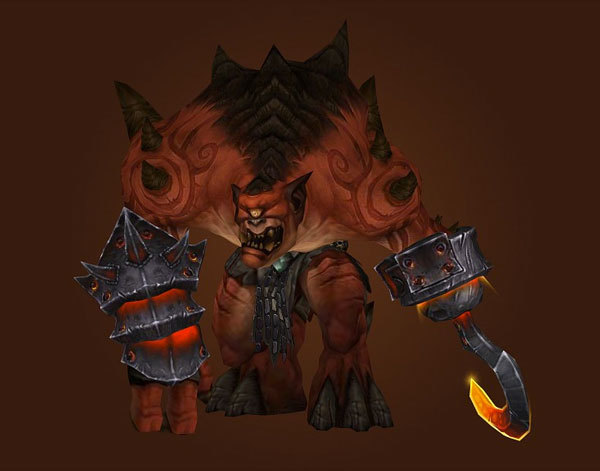 The first phase forms the majority of the fight and lasts roughly 70 seconds.  In phase one, most of the responsibility falls to the tanks.  Gruul has two different stacking debuff mechanics that the tanks will need to manage.  The first is Overwhelming Blows which deals heavy damage to the tank and anyone else within 10 yards and applies a debuff boosting damage taken by  further Overwhelming Blows by 10%. The second is Inferno Slice which is a frontal cone attack that deals a huge amount of damage split among all targets in its AOE. Everyone hit is debuffed to suffer 20% additional damage from future Inferno Slices as well as a burning DOT effect.

To manage these debuffs the raid needs to divide into 4 points around Grull.  A tank on the front and rear of Gruul with everyone else evenly split to each side of him.  The starting tank holds agro and soaks 2 – 3 Overwhelming Blows, making sure that they stay 10 yards away from all other players during this time, then when Inferno Strike is cast they turn Gruul to one of the groups of players to split the damage among them.  The other tank then taunts and repeats the same thing while the first tank and one player group have time to clear their debuffs.

Over the course of the fight Gruul will also use Petrifying Slam, which hits random players and sends them flying away petrified.  They will then explode after a short period of time, dealing damage to everyone around them.  All non-petrified players need to clear away from the petrified ones.  Gruul will also cause Cave Ins throughout the fight, simply move out of the marked AOE.  Lastly, Gruul will use Overhead Smash throughout the fight.  This attack deals a lot of damage to anyone caught in its path, however it has a very long cast time and is easy to avoid, if you pay attention.

The second phase of the fight happens after each phase one and lasts about 30 seconds.  In it Gruul will stand in the middle of the room and is not tankable, but instead spams Overhead Smash constantly.  This phase is all about individual responsibility, meaning “Avoid the big damaging attacks”.  Heal or DPS while staying alive by avoiding the smashes and get back to phase one.

At the 6 minute mark, Gruul will enrage and wipe the raid.

The second boss encounter in the Blackrock Foundry is another alternating two phase fight, but this time against Oregorger. 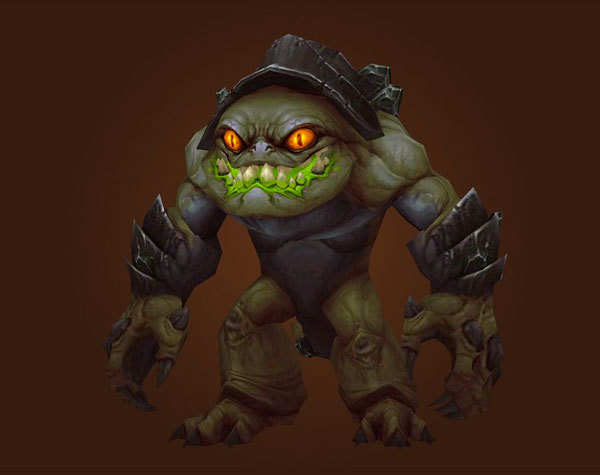 The first phase starts with the boss having 100 mana and when he reaches 0 phase 2 starts.  He uses up his mana to cast Blackrock Barrage, Acid Torrent, Explosive Shard, and Retched Blackrock.  Blackrock Barrage deals heavy raid wide damage and needs to be interrupted.  It is only cast after he casts the self buff Blackrock Spines, so players need to watch for that and then be ready to interrupt.  He will cast it several times in a row, so it is important to setup a rotation so that that there is always someone ready to interrupt the next one.

Acid Torrent is the most dangerous ability as it causes extremely heavy damage, but can be reduced.  It targets a random ranged player and moves towards them, dealing physical damage to the first person hit and nature damage to the target and anyone around them.  The nature damage is reduced by the amount of damage reduction that the first player hit has.  It also applies a debuff to the first person hit, making them take 20% additional damage from any more hits from Acid Torrent, meaning it must be rotated through.

To deal with this mechanic, the main tank should face Oregorger away from the raid, melee DPS stands to the sides of the boss, the off-tank stands behind the boss, and all range clusters in the distance behind the off-tank.  Once the off-tank gets hit and has the debuff, the tanks switch position.

Explosive Shards are targeted at melee players and knock the target and anyone within 3 yards back and then deal damage and a stun to those within 3 yards of another player.  Melee should keep spread out as much as possible, while not getting in the way of the Acid Torrents.

Lastly Oregorger with target random ranged players with Retched Blackrock.  This attack creates a lasting AOE effect on the ground that deals damage to anyone that remains in it.  They last a long time, so players should group up so that they can control exactly where the AOE will land, then move to a new spot when it does.

The second phase starts when Oregorger reaches 0 mana and ends once he has collected 10 blackrock ore and regains his full 100 mana, at which point phase one starts over.  The second phase is where the real fun part of this encounter is found, as it is a mad dashing fight to stay alive.  Oregorger will roll up into a ball and start rolling around the room.  He does so in straight lines, and always faces the direction he is going to travel for a few seconds before he does, so there is plenty of time to get out of the way.  If you don’t get out of the way, you will suffer extremely heavy damage and be stunned.  Whenever he ends a roll, he will deal large raid wide damage from his Earthshaking Collision ability.  Oregorger gains a stacking buff that increases the damage caused by Earthshaking Collision each time, meaning the damage gets harder and harder to deal with.

While all this is going on, ore crates will appear in the area.  Players need to destroy these crates to release the blackrock ore inside, which Oregorger will then eat to regen mana.  Once he has eaten 10 of them, you return to phase one.  While it is possible to kill him in the middle of a phase 2, it is much harder to DPS him while he is moving around all the time.

The last boss encounter in the first wing of Blackrock Foundry is essentially a long trash fight with a boss at the end.  The encounter has three specific phases which need to be dealt with.  Essentially the encounter is about shutting down the furnace, to do so you must destroy the Heat Regulators, defeat four Primal Elementalists, and then kill the Heart of the Mountain.

In the first phase, players need to deal with several different types of adds, which starts off as two Security Guards, two Furnace Engineers, and Foreman Feldspar.  Additional guards and engineers will spawn throughout the phase, as well as Bellows Operators.  The tanks should split the adds up and move to each side of the room which half of the raid.  From there players need to avoid damage and collect the bombs that the engineers will drop.  These bombs then need to be taken to the Heat Regulator on each side of the room to cause it damage and eventually destroy it.

Foreman Feldspar is held to one side of the room and traded back and forth between the tanks as required due to the Melt Armor debuff that he applies.  Tanks may also need to trade him off due to the AOE damage zones that he creates with his Rupture ability, which can quickly fill their side of the room.  The Engineers need to be interrupted so that they can not repair the regulators, or the phase will last too long.  The Bellows Operators will increase the Heart of the Mountains heat level, so need to be killed off.  The Security Guards can drop protective zones that reduce all damage by 99%, meaning tanks will need to drag enemies out of these spots. 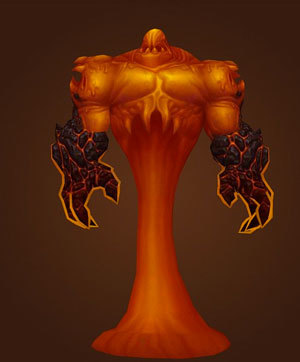 The kill order in this phase is: Feldspar – Operators – Engineers – Guards.

Throughout this phase the Heart of the Mountain will be gaining energy, and every time he reaches 100 he will cast Blast, which deals heavy raid wide damage.   At the beginning of the fight it takes 30 seconds to gain 100 energy.  This is reduced every 25 heat points, which will make it 20, 15, 12, and finally every 10 seconds.

Once both Heat Regulators have been destroyed, phase two will start. The objective of phase two is to destroy the four Primal Elementalists that are holding the Heart of the Mountain prisoner.

If that wasn’t enough, Guards will continue to spawn and use their shield ability from phase one, and a new type of add called Firecallers will also spawn.  Firecallers target random players and place a DOT on them that explodes after 8 seconds dealing heavy damage to everyone within 8 yards.  Firecallers can also heal other adds with their Cauterize Wounds ability.  This makes them a high priority target and they must be interrupted or killed of quickly.

Once all four Primal Elementalists are dead, the Heard of the Mountian will be freed and phase 3 starts.  This last phase is a race to kill him off before the damage he deals overwhelms the healers.  He continues to use Blast in this phase as well as targeting random players with Melt which leaves an AOE damage pool on the floor that lasts until the end of the fight.  He also has a debuff that stacks on tanks that means you will need to trade threat after 2-3 stacks.  This last phase is where you need you to use heroism to get through it before healers run out of mana.