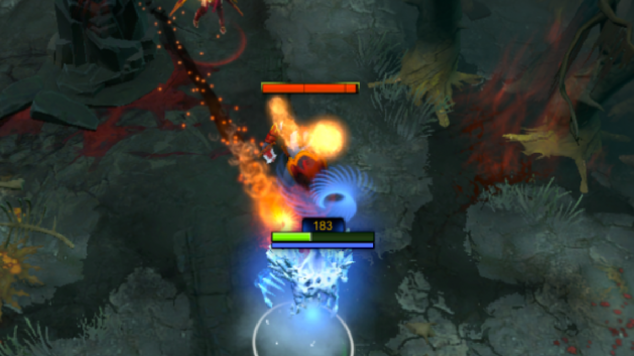 The game of Dota 2 seems fairly simple from the surface but when you launch your first game, it quickly becomes clear that it's a much more complicated beast. This steep learning curve can often turn off new players and cause them to abandon the game altogether.  In this guide we hope to prevent new player frustration by laying out some of the most common Noob mistakes. By learning them early and knowing how to avoid them, you can make your first Dota 2 days pleasant ones that hopefully continue as you progress.

Taking Damage From Creeps - Sometimes it's unavoidable but for the most part you should not be taking any damage from creeps during the laning phase. Taking damage not only makes you vulnerable to enemy hero attacks, it wastes your valuable resources in the form of health potions. Use your friendly creeps or the tower as a buffer between yourself and the enemy while you pick off the last hits.

Controlling the Courier by Accident - We've all done this by accident, clicking on the map while our hero stands motionless and we wonder what could be going on. Meanwhile the courier is on an epic journey through the middle of nowhere while your teammates wonder where their items are. Accidentally controlling the courier manually is as easy as pressing the wrong hotkey. If you find yourself doing this often, open up your keybinds and switch it to something out of reach of your usual keys.

Not Using a Proper Item Build - Even if you are using the same hero game in game out, you may not want to use the same item build depending on the team you are playing against and/ or the position you are playing. Make use of the extremely convenient built in build finder in the top left corner to find a build for every occasion. Having the right build for the job will make your life, and that of your teams, a lot easier.

Pushing Lanes too Early - If you're new to the game it's easy to see why one would think that pushing a lane = success, you want to kill the towers right? Not always the case, especially for the early stages of the game. Pushing a lane should only be done if you have a significant advantage over your lane opponent, or there are no enemies nearby. Pushing early only serves to leave you exposed to ganks, giving the enemy gold they can use to dominate your lane later.

Not Buying Wards - Knowing where the enemy is and where they are going is a huge advantage in any game. No matter what position you are playing investing in a ward is never a waste of gold and could possibly save your life if you use them to illuminate any paths the enemy could use to get a jump on you. Warding objectives like runes and Roshan are great ways to make sure they stay under your teams control.

Not Buying TP Scrolls - TP scrolls are a great purchase for a couple of reasons. One, they are a fast way to get back to base and heal/ regen your mana. Two, They can allow you to sneakily move to another lane quickly to gank an enemy. Three, if you are on the run from the other team and manage to lose them in the jungle you can use a TP scroll to return safely to your base.

Not Leaving the Lane - Knowing when to leave your lane to pursue a gank, or take part in a teamfight is something that you will learn with experience but there are still some things to look out for. IF you notice one of your lanes is pushed back to their tower and the enemy heroes are pushed up, it may be a good time to go in for the gank. If you see your team grouping up for an objective, join them. Eventually you will know the different phases of the game (laning, mid, late etc) and can more effectively adjust your positions taking into account other factors as well.

Only Playing One Hero - If you only take the time to play one hero you will not only be out of luck if that hero gets chosen by someone else, you will also not know what to expect from other heroes when you play against them. Load up some bot matches and take a variety of heroes out for a test drive. The more you know about the heroes, the more prepared you will be to play with and against them.

Skipping Bot Matches - Bot matches are a great way to sharpen your skills and get familiar with heroes. Often many new players will want to dive into the action immediately and will skip the easy bots in favor of the remorseless humans that await them in the live game. Same yourself some tears and fire up a bunch of bot matches before you take on your fellow humans. You can even adjust the difficulty of the bots as you get better and learn more about the game.

No Communication - Dota 2 is a team game, meaning to win you will often need to combine the efforts of all your teams members. Nothing goes better with good teamwork than communication. Let your team know what's going on and where you plan on going via the in game chat or even just via pings. The more your team communicates, the more coordinated your efforts will be, which means an even higher chance your team will come out on top.