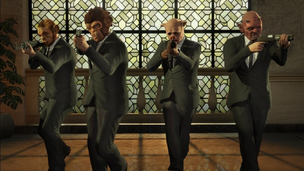 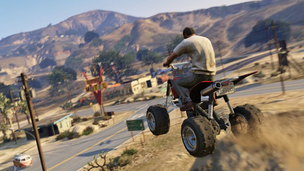 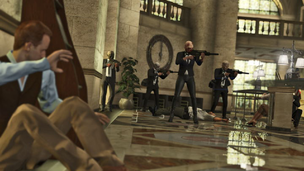 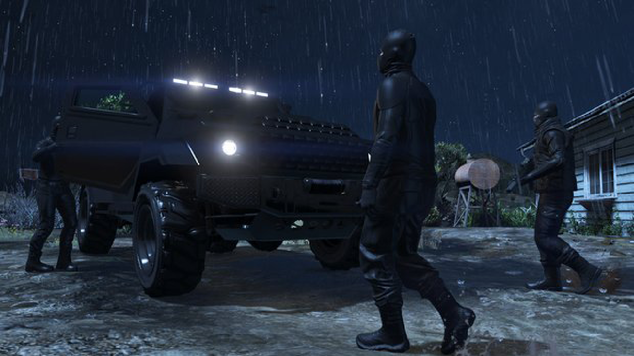 The third GTA Online Heist is the Humane Labs Raid with missions that range from snatch and grab, to stealth mode infiltrations. This heist requires four people and is one of the more difficult ones you’ll face, so make sure your crew is frosty and ready to give it their all.

All told there are six missions to complete to finish the heist, which definitely puts it at the longer end of the heist spectrum.

The first part of the heist will have you and your team hunting down key codes so you can access certain areas of the Humane Labs. It’s also one of the easiest setup missions to complete.

After starting the mission head to the area marked on your map where you will meet with the contact. When you arrive, two players will be directed to meet with the source while the other two act as lookouts. When you’re in position the exchange will start and go wrong immediately afterward as the site is swarmed with FIB agents.

Fight your way out of the lot, lose your wanted level and make your way back to HQ to complete the heist.

Next up is securing some transportation, specifically two Insurgent vehicles from the Meriwether quarry. No need for team designations this time around, so make your way to the quarry.

When you arrive, fight your way to the Insurgents and take out the surrounding enemies. When it’s clear mount up and begin to make your way out of the Quarry. As you begin to leave two attack helicopters will start attacking you. To make life easier, have the player manning the mounted gun in the Interceptor take them out before you hit the open road.

As you return to the HQ keep your Interceptors close and your weapons ready, there will be a ton of enemy units trying to take you down along the way. When you are within a short distance of the delivery point you will receive a mission to kill the remaining Meriwether units. Complete this and park the Insurgents in the marked spot to complete the mission. 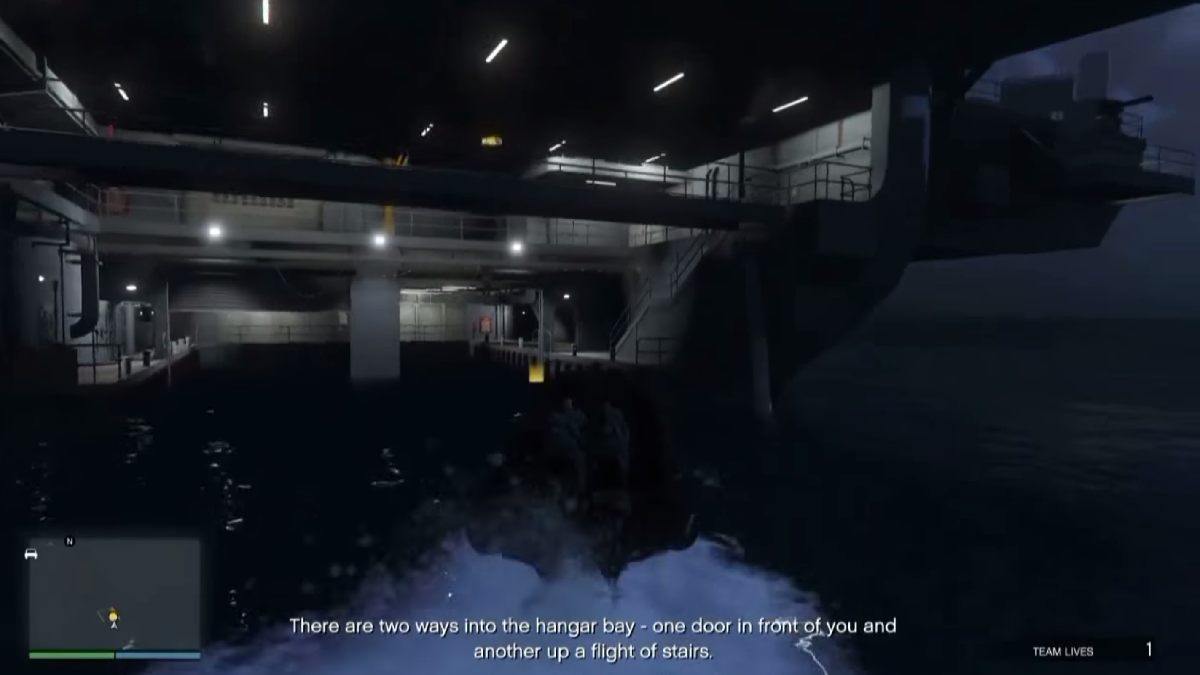 No teams on this job which you might be familiar with from the trailer promoting online heists. Yes, this is the one you get to steal a VTOL Jet (Hydra) in.

After starting the mission head to the marked area on the coast and have the entire team pile into the dinghy. When everyone is in your waypoint will be updated with the Aircraft Carriers location.

Enter the rear of the Aircraft Carrier and start clearing out the sailors on your way to the Hydra’s location. You will eventually fight your way to the main deck where the Hydra will be waiting at the front.

Have one person hop into the pilot seat of the Hydra while the rest of the crew jump into the nearby Lazers. After everyone is in the air the enemy jets will start streaming in to take out the Hydra en route to the drop off.  Luckily the only thing the enemy jets are conscerned with is the Hydra, so the Lazers can just focus on keeping it safe from enemy attacks. The enemy jets will move in behind the Hydra before attempting to fire. Stay in formation a short distance behind the hydra so you have a clear shot at them.

After making it to the drop off, gently hover onto the landing pad and the mission will be completed.

At this point you may be detecting a pattern, no team setup for this mission either it’s a straight up snatch and grab, with a lot of shooting.

Follow the waypoint to the docks where the Valkyrie is located. Before you reach the gate to the restricted area unmounts and get ready for battle. The area is heavily defended all the way to the Valkyrie with snipers, soldiers, and choppers. Don’t cut any corners at this point or it will create headaches later; take out all of the red dots before getting in the Valkyrie.

Note: This area is bad for snipers. Check around corners when possible to avoid being blindsided.

Mount up on the Valkyrie, which has a spot for everyone including a mini-gun on each side and an anti aircraft weapon that the front seat passenger can control. It’s a good thing to because as soon as you take off, you’ll be swarmed by enemy buzzards that you have to destroy before landing at the drop off.

Have your passengers acting as lookouts for the buzzards. When they sight one you’ll need to point the chopper in its direction so that your front gunner can get a clear shot at it. When they’re all destroyed drop off the chopper and you’re done! 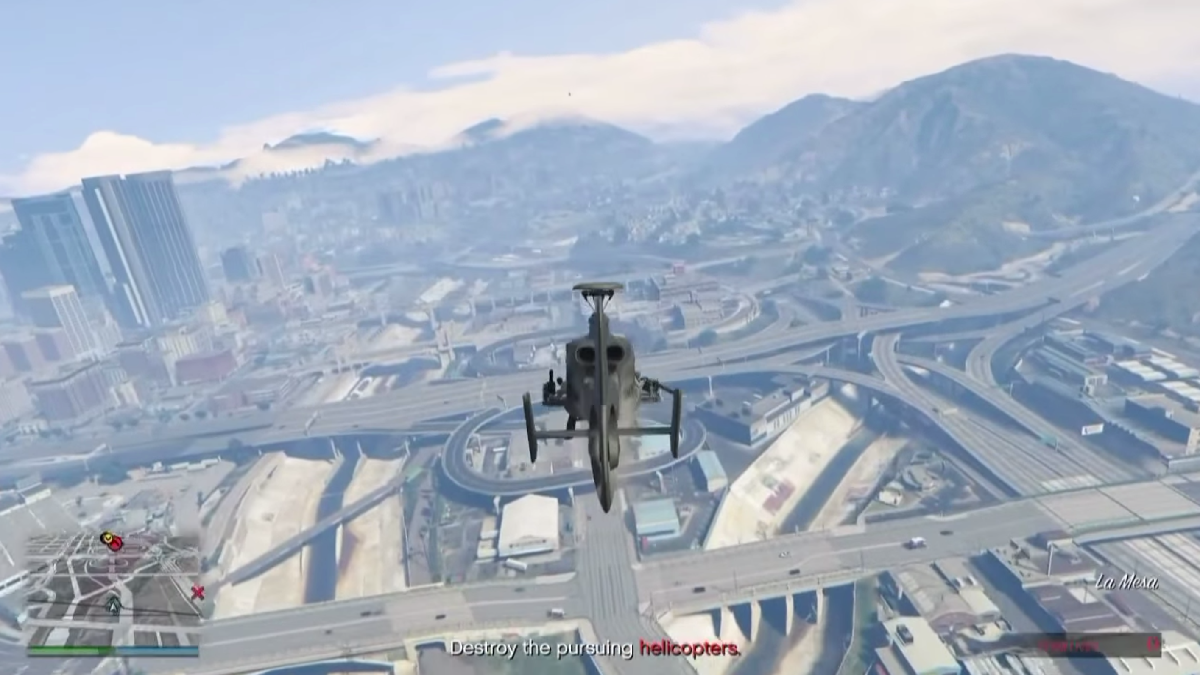 Probably the most difficult mission of the bunch, still no roles to assign but teamwork will be a must if you are going to succeed. You’re end goal is to successfully plant the EMP weapon inside the lab where it will be sued in the final act.

Before you even start the mission you should be familiar with how stealth works in GTA V. For starters, by crouching (stealth Mode) you’re sound is muffled and you can sneak up on enemies without alerting them. Try to stay in stealth mode as often as possible when enemies are around. Silenced weapons are also a must for this mission, so make sure you have a silenced version of each variety. Your mini-map is your friend, use it to watch for red dots that you will need to kill.

The first task is to pick up the Insurgent that you stored in the earlier mission. Follow the waypoint to the labs but be ready to go. As soon as you arrive at the destination marker a 10-minute timer will start indicating the amount of time you have left to complete the mission.

As soon as you’re out of the vehicles, take out the two gate guards with silenced weapons and then move in towards the lab building. Following the marker until you reach the courtyard (take out the sniper there), at which point you will want to split into two teams.

The first team will be moving ahead taking out guards, while the second stays back to deal with scientists.

The first team will now move ahead towards a large number 8 on the wall and climb the nearby box to get to the next level. After climbing the box, kill the two guards at the top and wait for the second team to get in position.

While the first team is doing its thing, the second team can get into position looking down the stairs situated near the number 5 on the wall. At the bottom of the stairs there you will see two scientists. Each player of team two should take aim at the scientists and get ready to coordinate with team 1 to fire.

Team one can now move into position on the other side of the scientists to take out the guard protecting them that team 2 will not be able to get vision on. Bot team will need to time their shots exactly to take all three down at exactly the same time. If one is shot even slightly before the other, an alarm will trigger and the mission will fail. 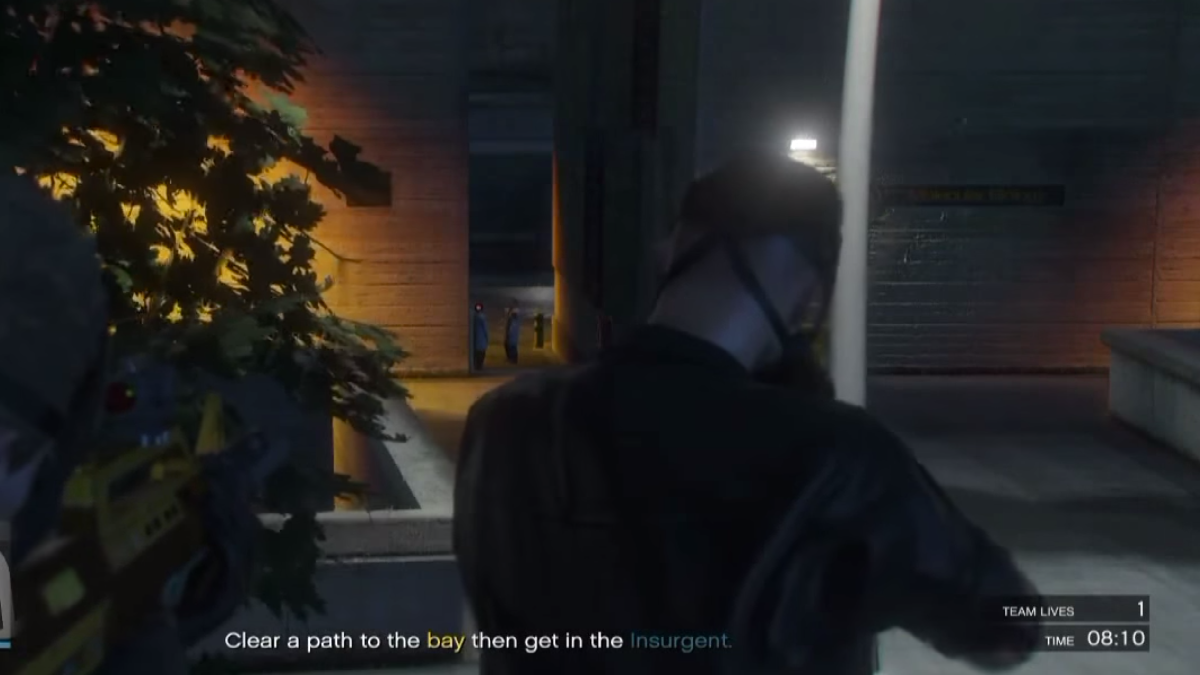 After killing all three, team 2 can move through the stairwell and then two the right where two more scientists will be waiting at the end of the hallway. Take out the two scientists while team 1 moves stealthily along the opposite walkway. Team 1 will eventually be able to see two guards located in front of team 2 that team 2 will not be able to see. Have Team 1 silently snipe them simultaneously while keeping it stealthy. Once those two are dealt with there will be four more red dots on the map to deal with, so have each team member line up a shot on each one and then count down to kill them at the same time.

That’s the last of them. Hack the garage door and park the Insurgent inside. You can then all jump in the remaining vehicle and drive out of the lab. DO NOT engage any Meriwether patrols on the way out or you will fail the mission. They will not recognize you or bother you.

It’s time to finish this thing, so divvy up the reward shares and get ready to go. You’ll have to assign two teams for this one, a ground team and a chopper team. It’s the job of the ground team to infiltrate the lab and steal the files while the chopper crew covers them and picks them up when they’re done.

First task to complete is picking up the Valkyrie. When everyone’s in, fly to the waypoint but do not land. All you have to do is hover over the waypoint and the mission will begin. You’ll know the mission has started when the EMP detonates. It’s at this point that the ground team will bail out of the chopper and parachute down to the lab below.

The first thing you’ll have to do is blast your way through the doors with sticky bombs. Once you’re in it’s as easy as following the waypoints and taking out any enemy forces you encounter. No need for stealth this time, fire away with the heavy stuff.

You’ll eventually come to a set of doors with a button on each side. To open them each ground team member will have to press the buttons at the exact same time. Collect the goods and follow the waypoints that come up until you reach the ocean.

Equip your scuba gear and start swimming through the tunnel. It’s a good idea to tap the sprint button to swim faster so you don’t run out of air. At the end of the under water tunnel you will come out on a hidden beach where the chopper team should land and pick you up. 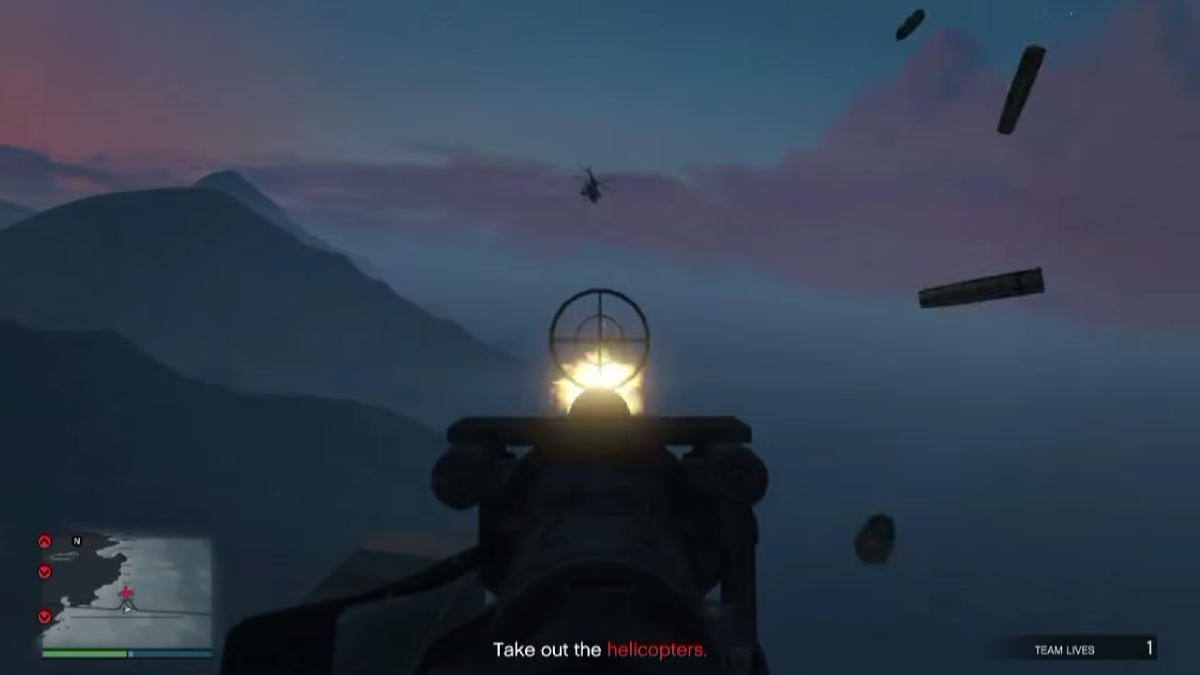 When you take off you will be attacked by a wave of Buzzards. Use the Valkyries guns to take them out like you did in the previous mission. When they’re all dead a waypoint will appear. Land at the destination and that’s it! Collect your cash and go celebrate.