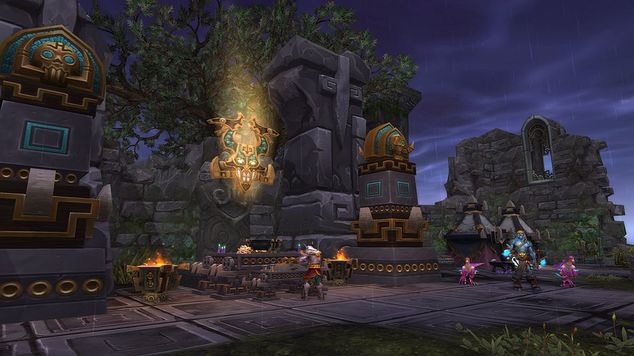 When scenarios were added to the World of Warcraft just before the launch of Mists of Pandaria, Blizzard made mention that they would be used for more than just small group content. That comment has come true with the launch of patch 5.2 and the new solo scenarios added to the game on the Isle of the Thunder King.

These new scenarios unfold as part of the story telling aspect of the game as you unlock various portions of the Isle of the Thunder King. Instead of having everyone compete over key enemies on the isle and wait for respawns, Blizzard has made these key parts of the story line into solo scenarios. This means that you will no longer have to worry about hurrying to tag a mob before someone else does (which is important in a multi faction area) as well as allowing you to go at your own pace and either read or skip the story text as you chose.

So far there are three different solo scenarios that become available as you progress through the unlocking of the Isle. They are as follows: Isle of Thunder, Tear Down This Wall, and To the Skies. These scenarios take place at different stages when unlocking the Isle and are done between daily quests. For more information on the daily quests on the Isle check here: Isle of the Thunder King Daily Quests.

Note: While this guide shows the Alliance version of these scenarios, the Horde versions are nearly identical, with really only the quest providers and some of the flavour text being different.

For the Alliance faction when it is time to gain a foothold on the isle, Jaina will give you a quest to capture a troll base to use as your own. This involves several phases as you enter the first of the solo scenarios to complete this quest. This scenario has 5 stages as follows.

Stage 1 - You set out with an escort to get to the isle.  On the way though you are shot down by lightning.

Stage 2 - Here you need to surviving the ambush after you are shot down.  You must simply slay a few beastcallers and their pets and you will move on.

Stage 3 - Requires you to move up the pathway to the start of the hill and knock out the troll barricade there. From this point on in the quest line you should watch for Devil’s Blood Elixir’s laying around the area.  This elixir grants a 30 second buff that heals you for 5% of your health every 3 seconds.  This is very useful if you are not raid geared.

Stage 4 - Involves killing a giant triceratops type mount and the troll beastcaller Pakutesh that is riding it. 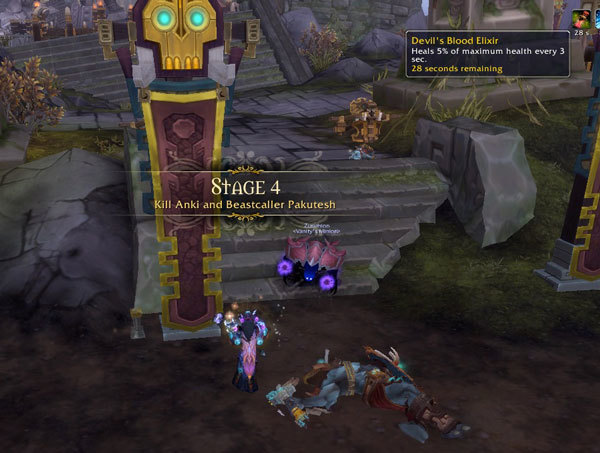 Final Stage - Has you make your way to the centre of the troll camp and defeat the troll guarding the artefact that is powering the shield that is protecting the base. Again watch for elixir’s on the ground as they can really help you survive the fight.  In this fight you need to deal with the troll and the artefact that floats around.  When the floating artefact starts casting a silence effect you need to make sure you get into one of the shielded areas that forms on the ground or you will suffer significant damage and be silenced for 10 seconds which could mean your death as a caster.  As long as you watch for this and get into a shielded area the fight is simple enough.

Note: A key thing to realize and something that is not explained in the quest text is that once you are done you need to “leave instance”.  This is because the game starts a solo instance for you, which it does tell you, but never makes it clear that you need to leave it to complete the quest.  Many players have spent a lot of time looking for a quest turn in while in the instanced version of the isle, and wasted a lot of time.  Therefore, once you see that you are done all of the stages of this quest chain and your base has been established, just leave the instance and you will appear in front of your factions leader to turn in the quest.

Tear Down this Wall! - Solo Scenario

This is the second of the solo scenarios where you actually get to break down the wall and enter the inner courtyard. For all you players out there that like out of game references, this quests name is actually a shout out to a speech by the former US president Ronald Regan about tearing down the Berlin wall in the 80's. 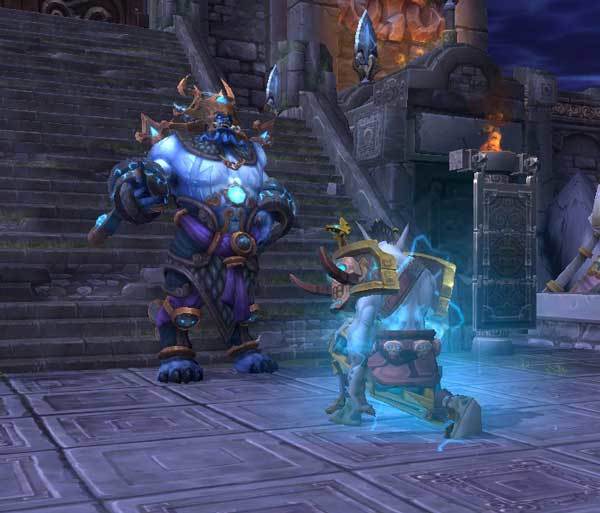 This scenario starts with a video clip that shows the emperor Lei Shen empowering a troll to become the embodiment of the War-God Al'chukla and then has 4 stages as follows:

Stage 1 - In this stage you need to make your way forward through the Mogu defenses and finding the heavy explosives.

Stage 2 - Make your way to Vereesa at the wall of the city with the explosives.

Stage 3 - Go ahead and have some fun blowing stuff up! Light the fuse of the explosive at the wall.

Final Stage - Make your way to the central mall and kill the War-God Al'chukla. This is a fairly straight forward fight with the only real issue being avoiding the pull from the lightning areas that he spawns. They have a magnetic ability that pulls you in to their damage area if you get too close.

To the Skies! - Solo Scenario

This is the third of the solo scenarios found on the isle of thunder and involves taking to the sky on a terrorwing and then heading underground to disrupt the Mogu mining operations on the isle.

The scenario has 6 stages as follows:

Stage 1 - You get to mount up one of the awesome looking thunderwing fliers to make your way inland. These are giant pterodactyl like creatures that are resistant to the electricity in the air around the island.

Stage 2 - In this stage you are spotted by the Zandalari and need to fight off their attacks. To do this you leap from flyer to flyer while defeating the trolls on each.

Stage 3 - You will be knocked off your thunderwing at this point and fall to the ground. Here you need to defeat Horaki the Beastmaster, a hunter troll with a nasty ranged attack.

Stage 4 - Once Horaki has been defeated you will find out that your Shado-pan contact, Taoshi is near by, find her to start the next stage.

Stage 5 - Accompany Taoshi to the nearby mines and then clear the entrance from a cave in.

Final Stage - Once in the mines you need to find the door at the other end of the mines to let your forces in. Once there protect Taoshi while she unlocks the door. To complete this you will need to defeat the Slavedriver Shiaxu that will appear.