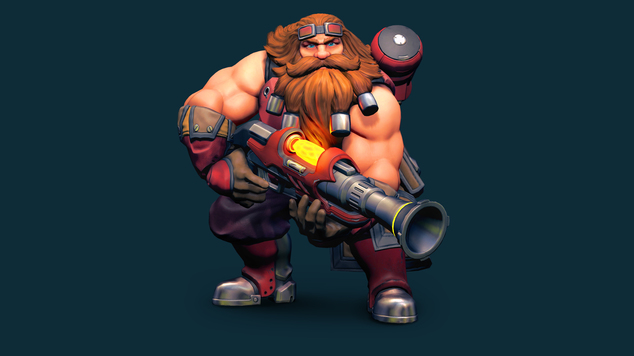 Barik is a ranged front line Hero that’s capable of protecting his allies through the use of his Barricade and the deployment of his Turret. Equipped with a blunderbuss, he’s able to fire at enemies from long range and can easily escape with his Rocket Boots. In terms of his group utility and viability, his main purpose is to protect allies as they attack or when defending a specific location.

His barricade can be significantly improved to the take huge amounts of damage and whilst behind it, he and his team can fire out. Combined with Fernando, it’s such a high amount of defense that teams can sometimes struggle to break through. Where his turrets are concerned, they aren’t great but do providing reasonable area denial. Unfortunately for Barik, they're easy to kill and have a relatively long cooldown. Despite that, Barik can still deal a fair amount of damage just from his rifle attacks alone.

Blunderbuss (LMB) - Acting more like a shotgun, Blunderbuss is a close range, high damage weapon. Capable of firing once every second, its damage is distributed across 13 pellets, for a total of 600 damage. You'll rarely land all 13 unless immediately next to an enemy. In addition to this, if used in conjunction with your Turret's which can mark an enemy, Barik gains a maximum of 20% bonus damage (10% per Turret) bringing the total damage output to a potential of 720 per shot. Considering the weapon has such short range, I'd recommend you don't poke from afar with it and instead keep your Blunderbuss fully loaded for medium to close range skirmishes.

Barricade (RMB) - Barricade erects a large transparent barrier in front of Barik that absorbs an amount of damage over 4seconds. If destroyed, the skill will still remain on cooldown and the barrier will disappear. During its active time, all allies can freely pass through the barrier and if they stand behind it, will avoid all damage received. Allied players are also free to shoot through the barrier without taking damage while it will obviously block unfriendly fire. If you can, try to always place your Barricade so that it’s angled where you expect the enemy to arrive or to protect a bank of your turrets.

Turret (Q) - Your turret has a 10 second cooldown and takes about 2 seconds to build and become active. It will automatically fire upon the nearest target and will attempt to also target who you attack. Placing it upon high or as far back as possible is the best course of action, or immediately behind your barricade. However, be aware its range is limited - it can only shoot so far. If you can, try to always place your Turret where it can't be easily sniped in positions enemies won't always expect.

Rocket Boots (F) - Your primary means of escape, Rocket Boots allows Barik to run away at high speed. It lasts around 4 seconds and can pretty much guarantee you escape every time due to the distance you travel. Just be sure to use it before you get too low on health as you can still take damage during your travel.

Dome Shield (Ultimate) - Providing a large area of shielding with a very high amount of health (20,000!) the Dome Shield not only protects all those inside but it also spawns a Flamethrower than deals considering damage to anyone in its range. It's best used for area denial, or to protect your team when they're on a control point. On Payload objectives it's a good idea to use it when your team is stalling, rather than when pushing. It will buy you time to recover but also prevent enemies from pushing onto you.

An extra 4000 health to your Barricade is ridiculous and makes Barik very difficult to uproot when on a capture point. 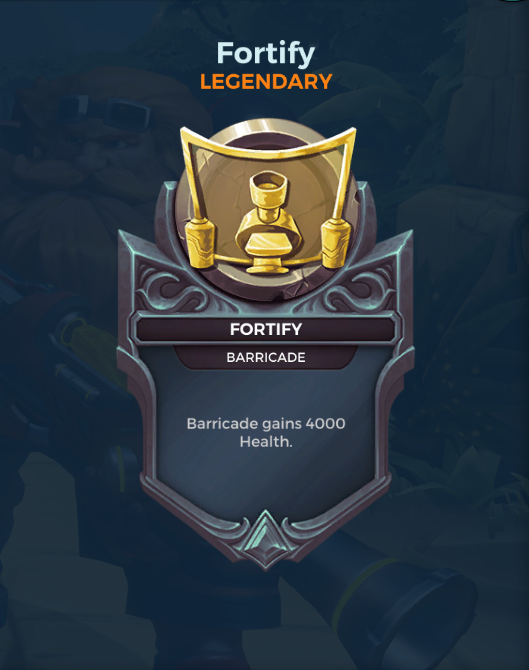 I think Barik's strongest Loadout is unquestionably improving his Barricade. His Turrets are average, even when upgraded, so ensuring you can protect you and your team is invaluable. 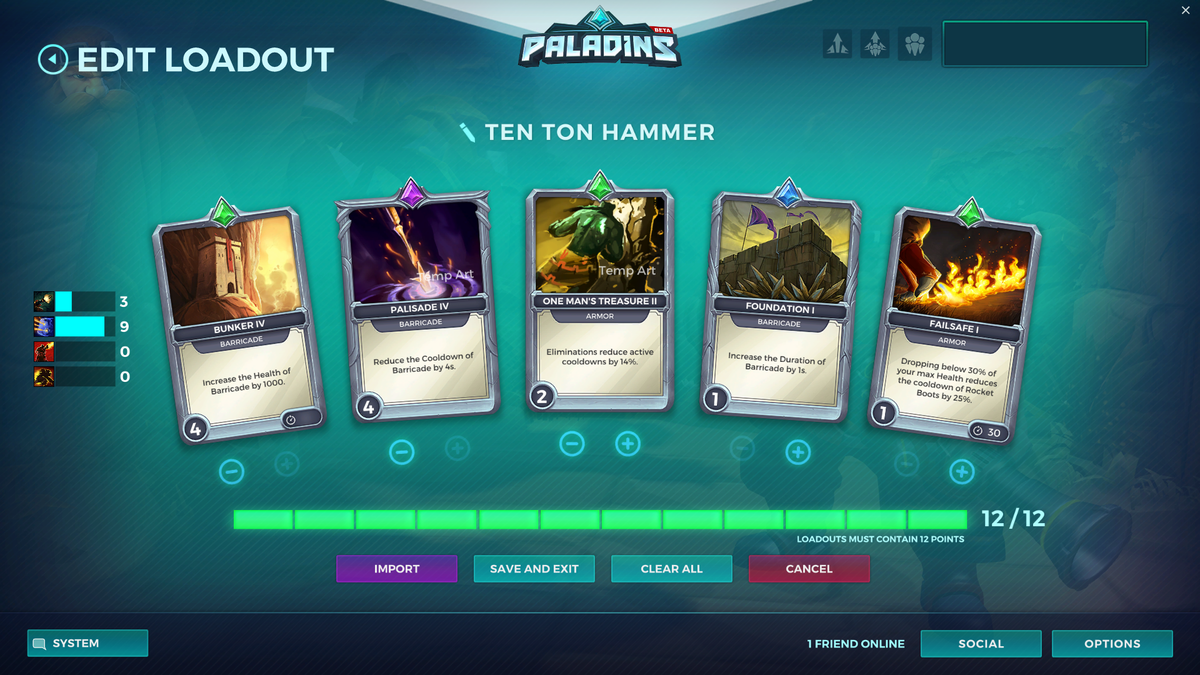 Variables: You can afford to drop one point from Field Deploy and Combat Repair and place it into Bunker for greater health to your Barricade.

I would strongly recommend you purchase items from Utility and Defense as Barik, with some flexibility towards Healing and Attack if you can afford it. Lowering your cooldowns and increasing your survivability through Haven is critical in ensuring you can stay alive and keep your Skills active.

Chronos: Barik like many front line Champions relies massively on cooldowns, especially when he wants to keep his Barricade active or his Turret online. Taking Chronos first allows you to instantly shave 10% off your cooldowns, with further upgrades improving it to a maximum of 30%.

Illuminate*: Barik is incredibly vulnerable to Skye and she can comfortably burst him down before he or his Turret can react. Taking Illuminate for greater visibility against her (50% by default) works very well.

*Only if the enemy team has Skye

Haven: Mitigation never hurts and reducing your incoming damage by 10% (by default) is great for Barik. He's often poked by ranged attackers or harrassed by melee so it provides some much needed survivability when Barricade is on cooldown.

Kill to Heal: It's surprisingly easy as Barik to kill players simply because your Turrets if placed well do a lot of the work.Taking Kill to Heal allows you to maintain keep your health topped up in a fire-fight and can be triggered fairly often.

Cauterize: As a front line hero it can be invaluable to reduce the effect of healing on a target and considering Cauterize reduces this value at base by 30% it makes bringing down those heavy hitters much easier. I would stress however that Cauterize should only be purchased if you can spare the cost versus the items above.

Wrecker: Barik's Blunderbuss does huge damage if you get up close and taking Wrecker allows you to bolster your damage against shielded opponents by 75% up to 225%. If you're against Torvald, Fernando or Makoa it's worth taking over Cauterize as you'll be able to rip through them incredibly quickly.

These Champion threat Levels (1 being lowest threat and 10 being highest threat) are to help you determine which enemy Champions can cause you difficulty. For Champions listed here, take extra care as they're particularly dangerous for Barik.

This list of tips and tricks are just a handful of things we think will help your Barik play. We'll continue to add to the list as required and if you have any tips you'd like to share, let us know in the comments below and we'll place them here.

1. Always place your Barricade where your expect the enemy to arrive so that you prevent any incoming damage.

2. If you can, using Barricade on the capture point alongside Fernado will make it extremely difficult for enemies to flip it.

3. Try to ensure you’re as far back from the enemy as possible once you’ve placed a Barricade - there’s no need for you to be at the front.

4. Your turret is super squishy - place it behind a Barricade or in an area that’s hard for enemies to reach.

5. Always save your Rocket Boots for escaping. You should only ever use it to engage if you can guarantee the enemy you’re sprinting to will die.

6. If you can, try to always be the first to a capture point so you can setup your turret in a good spot. This includes when defending/attacking.

7. Try to only place your Turret when it can be built and survive for some time. Placing it down when it will instantly die is a complete waste.

8. It's pretty pointless firing your Blunderbuss from afar. Use the time instead of firing to reposition or protect your team.

9. When defending, try to setup your Turret early so you've two active when the enemy team arrive. Be sure to protect them with a Barricade so they last some time.

10. Don't waste your Ultimate. It takes a while to charge as Barik but its shielding is incredible on a Capture Point, especially if you follow it up with a Barricade the moment it fails.