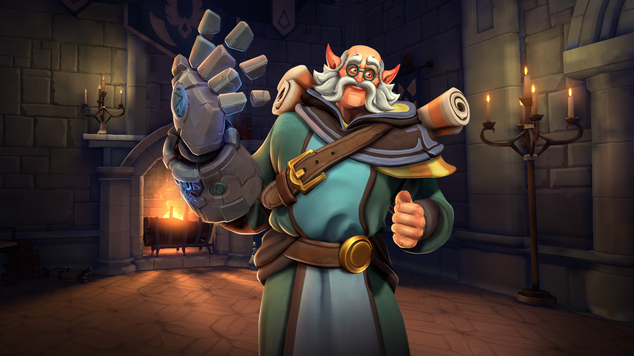 Torvald is a melee front line Champion that offers both mitigation and sustained, close quarter damage. With little to no mobility, he relies almost entirely on effective positioning and his shielding to withstand punishment and to protect his allies. Despite his sluggish playstyle, he makes up for this with unrivalled ways to protect himself and his team.

With the ability to shield an ally from afar (Protection) or to replenish both his health and shielding through his (Gauntlet) he can be invaluable at looking after his team and importantly, being difficult to uproot when pushing a Payload. I will stress that due to the close-quarter nature of Torvald he's particularly weak against a ranged heavy composition while Wrecker (which allows Champions to deal significantly higher damage against shields) does kick him into touch. Despite that, he excels in close quarter environments and if he regularly keeps his shielding and health topped up, he's incredibly tough to bring down.

Gauntlet (LMB) - As Torvald's primary means of attack, Gauntlet is a channeled skilled that locks onto a single target and the proceeds to deal rapid damage - as a beam - every 0.1 seconds. Its damage while relatively low at base, is high when you factor in the rapid delivery and the fact Torvald has an ammo of 50. Considering it has a very close range and the fact you move slower while channeling the beam, you need to ensure you're up close and personal to gain maximum damage output. It's also best used follow Runic Blast so enemies are silenced and disarmed: they'll be unable to escape.

Recharge (RMB) - Your primary means of sustain, in terms of health and shield acquisition, management of Recharge is imperative to Torvald's survivability. Providing a Shield Health return of 2125 over 2.5 seconds, it's a sizeable but won't keep you alive under heavy pressure. Considering its cooldown of 10 seconds, it's also important to ensure you aren't interrupted during its channel so find cover. It's also important to note that Recharge also siphons Shield Health from enemy players, returning 2000 per second. Against Fernado, Makoa or Barik, this can be particularly powerful and you should aim to preserve Recharge's use until they cast their shield.

Runic Blast (F) - A (very!) short range silence and disarm, Runic Blast is invaluable. With a lengthy cooldown however it's critical that you don't waste it. I'd say the range is roughly 5 units, which is the equivalent of standing one player away from another. Failure to be close enough to the enemy will result in the skill fizzling out: you'll know because the animation won't appear.

Protection (Q) - As a ranged shield that provides a 2000 Health shield, Protection is invaluable at preventing a spike of damage against a single target. Considering its cooldown (7 seconds) and its brief duration (2 seconds) you need to ensure it's not wasted and the target chose is one that needs the mitigation. Ideally you want to be applying it to someone under immediate threat of damage or to a front line Hero such as Makoa who is about to dive in. It's also worth noting that its range is near limitless - as long as you can see your ally, you can apply the shield.

Hyper Beam (E) - I would argue that Hyper Beam is one of the strongest Ultimate skills in the game. With near limitless range, it instantly channels a huge blast of power in a straight line. Anyone caught in the beam is immediately knocked back, while suffering damage. Its damage isn't amazing (50 damage every 0.5 seconds - roughly), but its zoning potential and ability to knock targets away from a Payload or your team is invaluable. Be aware however that enemies who're pushed can still deal damage back, while you're vulnerable to crowd control and enemy attacks while channeling.

I choose Alternating Current over other legendary cards simply because it allows your Recharge to last 4 seconds. Not only does this increase your survivability but also allows you to drain opposition shields for much longer. 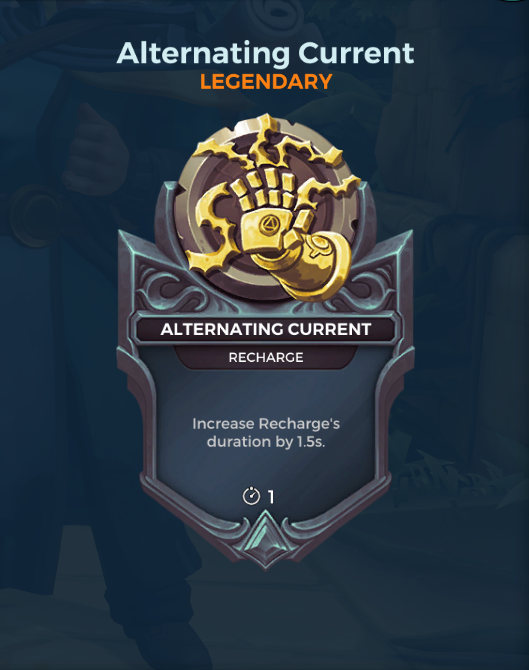 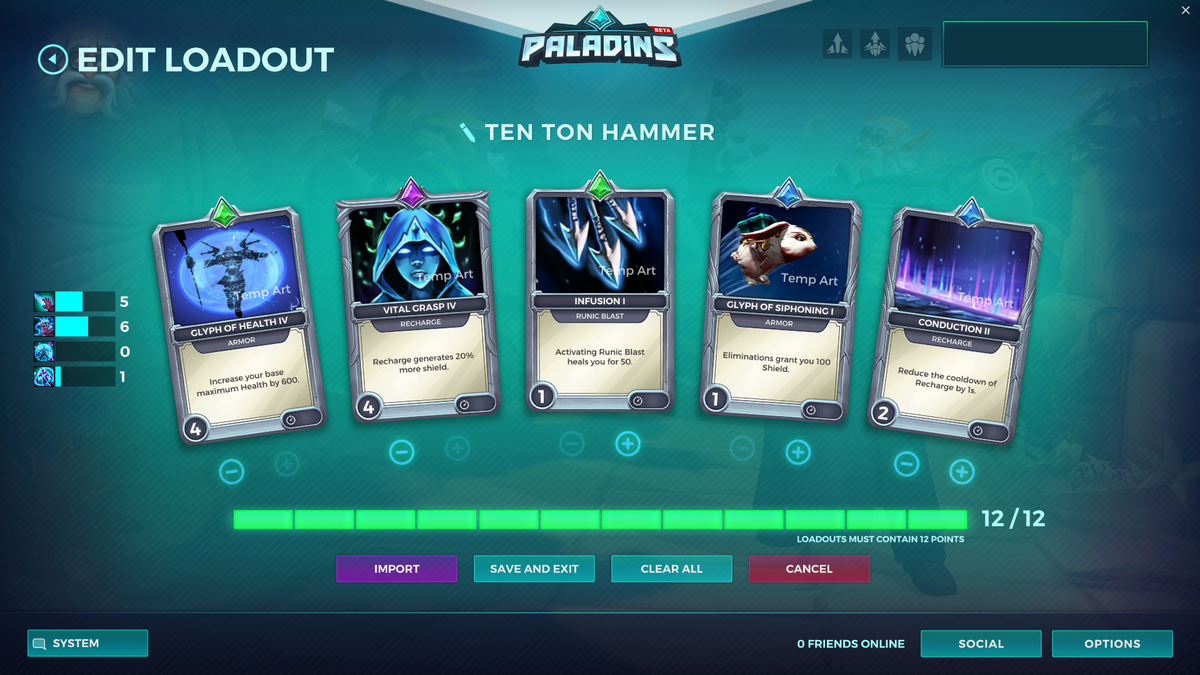 Variables: You can reduce the number of points in Glyph of Health and divert them to Conduction to gain more frequent use of Recharge.

I would strongly recommend you purchase items from Defense and Utility with no real requirement as Torvald to invest in attack (let others do the heavy lifting). Most of the defense and utility upgrades, while eventually expensive, allow him to snowball fairly easily and allow him to become an immovable object.

Resilience: As a front line Champion you are going to be subject to a great deal of crowd control. Having a 30% (default) reduction in crowd control and slows against Torvald is often significant. Considering his lack of mobility, staying mobile - regardless of movement speed - is incredibly important.

Haven: Torvald is very vulnerable to ranged attacks so Haven helps to further mitigate them. Although starting out minor (at 10% damage reduction from Direct attacks) it soon ramps up to 30%. If you can cap it out, you're incredibly challenging to kill.

Chronos: Torvald relies massively on cooldowns, not just for his own sustain but for the protection of others. Starting at 10%, Chronos eventually lowers cooldowns up to a maximum of 30%.

Kill to Heal: It's surprisingly easy as Torvald to kill players simply because you're so tanky and your damage, once up close, so high. Taking Kill to Heal allows you to maintain a burst of healing rather often and at 300 health per kill, this is fairly significant.

Cauterize: As a front line hero it can be invaluable to reduce the effect of healing on a target and considering Cauterize reduces this value at base by 30% it makes bringing down those heavy hitters much easier. I would stress however that Cauterize should only be purchased if you can spare the cost versus the items above.

These Champion threat Levels (1 being lowest threat and 10 being highest threat) are to help you determine which enemy Champions can cause you difficulty. For Champions listed here, take extra care as they're particularly dangerous for Torvald.

This list of tips and tricks are just a handful of things we think will help your Torvald play. We'll continue to add to the list as required and if you have any tips you'd like to share, let us know in the comments below and we'll place them here.

1. Try to always be in front of your team soaking damage. It might sound obvious but I've lost count at the amount of Torvald players I've seen attempting to flank.

2. On maps where there's a Payload Torvald is often strongest. He can use the Payload to block some incoming damage and use this time to replenish his shielding.

3. Don't be afraid to play aggressively. With the build above you have over 10,000 Shield Health, allowing you to withstand tons of damage.

4. Try your best not to miss with Runic Blast. Its cooldown is enormous and its disarm/silence too valuable to waste.

5. If against a shield-heavy composition, be sure to save Recharge against them to quickly drain their shielding.

6. Use Hyper Beam in locations where enemies can be knocked back as far as possible. Using it in close quarters still has value, but sending enemy players hundreds of units away from their objective is far better.

7. Protection has a narrow window of opportunity - use it on players you expect to receive damage, or those already fighting an opposing Champion.

8. Find cover when using Recharge so that you gain its full value.

9. If you can, try to use Runic Blast against Champions before they use their skills. Using it afterwards will have little impact as their skills will be on cooldown anyway.

10. In large, open maps Torvald is at his weakest. Try to use terrain and use paths that are less common to ensure you can reach the enemy and/or the objective. Otherwise, you're going to die quickly.

11. Don't go solo. Torvald can withstand tons of punishment but can also be punished easily when alone. His lack of mobility makes him an easy target if he's by himself.

12. There's not much you can do about the Wrecker item. You have to learn to know who has bought it and who hasn't.