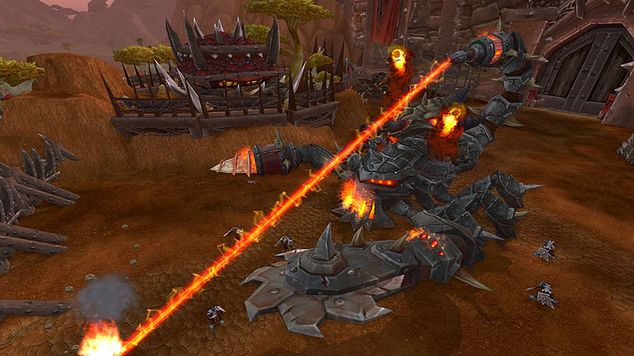 The next tier of raid gear will be released in the upcoming patch 5.4.  The new tier is the 16th tier of raiding gear and brings with it a whole new batch of set bonuses to enhance your characters.

As ussually some of the abilities look really great while others have players scratching their heads wondering what use they are. Here is a rundown of all the set bonus as they currently stand on the PTR servers (as of August 24th).  Please note that these may change before actual release, however since the patch release is within 2 weeks of this date, major changes are highly unlikely.

Where to Find Tier 16 Gear

As with previous raid tier sets the items are not dropped by bosses directly. Instead specific bosses drop tokens that represent an item, for example a chest piece, which can then be turned in to a vendor for item for your class and spec of choice.

The tokens are all found in the Siege of Orgrimmar raid and are drop from the following bosses:

Each raid type (LFR, Flex, Normal, and Heroic) each has a specific token that can be turned in for an tier piece of that item level. The item levels are as follows:

The set bonuses seem to be good for each of the Death Knight sets. With the DPS 2 piece bonus standing out to me, as 500 of any stat, stacked 10 times is a huge amount. Thats up to 5000 haste or mastery on top of what you already have, assuming you can keep the stacks active.

With so many different specs, the druid class gets a whole ton of new set bonuses.  Since I play a healer, those are of the most interest to me and the bonuses look solid so far. Assuming you have rejuv up alot (and why wouldn't you) it means you will lower the cost and casting time of your big heal to 0 over time. This is in addition to your free cast from procs so will do two great things for a druid healer, bring down overall mana usage and increase amount healed since Healing Touch will be cast a lot faster more often.

The 4 piece bonus is equally good as it turns an otherwise kind of useless ability in many fights into an awesome boost to healing. Even though the extra healing is fairly small, it is added to our common AOE heal and is healing for free across the board. I am pretty excited about these new set bonues.

The hunter 2-piece set bonus is a good boost as it allows you to rapid fire far more often. Even though the bonus started out in PTR as a 12 second reduction to the cooldown and is now only 8 seconds, it is still a big boost to overall DPS. The 4-piece bonus is an even bigger DPS increase across the board with potentially the Beast Master winning out on the % increase due to the stacking nature of the effect they earn with it.

All of the mage abilities appear great as they offer either faster or cheaper spells or extra stats. All of which are great for a caster. The issue here is, are the perks enough? Not playing a mage in a while, the numbers seem low, but I could be wrong.

Not playing a Monk seriously yet, makes it hard to quantify these bonuses.  While I understand the mechanics of the monk class and some of these look really good at first glance, I am not sure how good they are.

The tank 4 piece set bonus looks really good as healing for a % of stagger could be huge, as the stagger numbers can get way up there in a fight. How that works in reality though, I am not sure.

The healer 2-piece bonus looks good as well as a 45% absorb added to free is pretty good on anything as is the 4 piece bonus that provides a chance at a free heal when you use a heal. Even though it is only on one type of heal, again any free heal is a great boost.

As a tank the protection bonuses most interest me here, and both are pretty amazing.  The heal for 75% of damage taken while under the Guardian of Ancient Kings buff once it expires is amazing. It means you can trigger it when you know you are going to get slammed, take a big hit and suffer a lot of damage, and then have it help out your healers when it comes off. Your healers will love this ability almost as much as you do. The 4 piece bonus is great too as it will grant a lot of extra holy power for free. It means you can use your Holy Power for free heals and then immediately hit with your shield since you will have the holy power left and create more bastion of glory charges which will generate more Bastion of Glory charges, which.... well you get the picture.

The priest set bonuses all appear pretty solid as they focus on healing or damage as approptiate. The stacking nature of the healer set bonuses seem really good, and as a result were already nerfed a little in PTR. The above numbers seen reasonable but still pretty darn good. We will have to wait and see what the final version ends up being.

Rogues are looking good with this tier as they end up saving energy from on combo point generating moves, which allows them to have enough envery to generate even more or to progress to finishers faster. The 4 piece bonuses look to work well and are specialized per spec, but could be uneven as they currently stand.

The bonuses I like here is the Elemental 4 piece set bonus as it summons a free lightning based pet to fight by your side. It is very thematic with the set and the spec, and provides somethign unique and usefull as it will be a DPS increase. How much remains to be seen, but I am all in for cool little flavour touches.

The same can be said about the restoration 4 piece bonus, as having a spirit version of yourself as a shaman spiritwalker is pure win. The fact that it is only for 15 seconds every 2 minutes dampens it a bit, but that is still 12.5% uptime, which means an extra 12.5% healing since it will duplicate all of your healing during that time.

There seems to be a trend lately with Warlock tier gear, and not a good one. As with tier 15 the warlock tier bonuses seem to be pretty plain. Tehre is not much that is cool and different for them.. However as with tier 15, the bonuses are straight DPS boosts and since Warlocks are all about DPS that means that they are ok. Boring, but OK.

The biggest bonus for warriors to me is the tank 2-piece set bonus. Healing for a % of the damage you block of absorb as a tank is something that any of the tanking classes would be glad to have. The fact that it is 30% is even bigger, as that will certainly add up quickly.

There are so many different bonuses available that it is hard to comment on all of them, therefore I looked at the most interesting to me.  Do you agree with the best ones listed?  Do you see a great bonus that I missed?  Feel free to share your thoughts on these Tier 16 set bonuses in the comment section below.