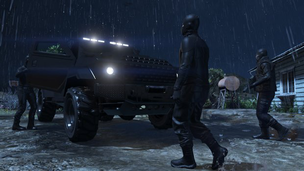 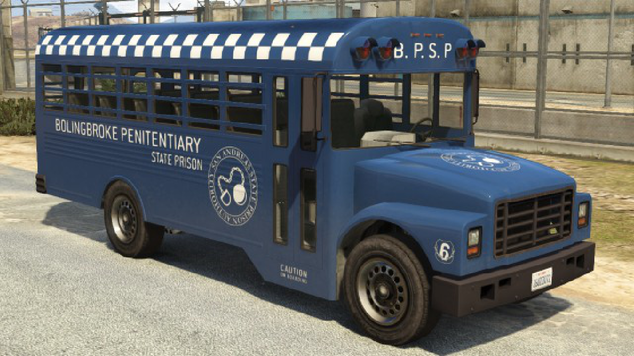 Your first real heist will require 4 players to complete. Your task is to liberate a scientist from prison using misdirection and of course a little shooting. There are 4 setup phases and one final phase to the heist, so get ready to buckle in a for a little while.

The Plane – Your first task is to acquire a plane from Mackenzie Airfield. Once you’re there clear out the armed guards and then have one player hop into the plane and fly it back to the marked airport. Easy enough.

The Bus – If you haven’t noticed you need a lot of vehicles for this heist. The bus will be marked on your GPS when you start this setup mission so head to it’s location, take out the escort chopper and the bus driver. You will then need to lose your stars and drop the bus off at the storage location.

Your best bet is to take the bus off road because you are not out running anything with its extremely slow speed and acceleration. After you’ve lost your stars you will still need to keep your distance from any law enforcement, which will give you a one star rating after sighting you.

The Station – This setup is a little more complicated and requires two teams of two to complete, the cops team and the cargo ship team. The cop’s team need to get their hands on a police cruiser and then head to the police station marked don the map. Once there, head inside but do not open fire or take a weapon out. Simply head to the marked bus schedule on your map pick it up and calmly walk out of the station. If that went well you will be prompted to park the cop car under an overpass and burn it to get rid of the evidence.

Meanwhile the cargo ship team has the simple task of stealing a car from a heavily guarded cargo ship. No advanced strategies here, kill the guards, steal the car and return it to the marked location on the map to complete the setup.

Wet Work - The last setup mission has you getting your assassin on by taking out some lawyers. Again there are two teams of two for this mission, the City Hall team and the Mansion Team.

The City Hall team have to head to the roof of city hall using the ladder marked on your GPS. Shortly after arriving on the roof, two lawyers will pull up in a car that you mist kill. They most effective way to deal with them is to assign one player a lawyer and then time your shots to take them out at the same time.

This is City Hall so there will be a lot of cops to lose afterwards. Consider having a speedy or well-armored car on standby to make your getaway.

The mansion team also has lawyers to kill, but they have to stealthily break into a mansion in order to get at them. Alerting even a single guard will send the lawyers running, making killing them a lot more difficult, so take your time and only use takedowns/ silenced weapons to avoid alerting them.

After deciding who gets what percentage of the heist rewards it’s time to start the big show. First off you will have to assign each player a role for the heist. The four roles available are Demolition, Prisoner, Prison Officer, and Pilot. Communicate with your team, find out their strengths and weakness and assign the roles to suit.

Head to the Prison bus and take out the driver. Once he’s taken care of you can take the bus to the marked location, and destroy it once your there. After that head to the other end of the airfield where there will be a Buzzard ready for you to steal.

It’s then the Demolitionists job to provide cover to the pilot and then the prisoner. Prison guard while they make their escape from the prison.

The pilot is the getaway driver in this heist and after he picks group the Velum he must go to Sandy Shores Airfield to wait for the other team members that will be heading there for an extract.

After everyone is safely in the plane, lose your wanted level and then bail out over the marked area. After landing safely all players can jump in the Buzzard to head to the final waypoint.

The prisoner and prison officer will be infiltrating the prison using the bus you stole in one of the setup missions. To get into the prison, simply follow the waypoint to the front gate, which should open right up for you. After you’re I the prison get out of the bus, at which point you will become wanted and the officers will open fire on you. Take them out and head to the scientists location on your GPS.

It will be a tough battle to get out of the prison once you get to the scientist, so make sure your demolitionist is in place to support you before you release him. Head towards the prison entrance with the scientist in tow while killing any NOOSE agents you see. You should be coordinating with your demolitionist to provide cover fire throughout this fight. Near the entrance there will be an armored truck you can get in. Once you’re in, high tail it for the airfield.

Cops will automatically spawn at the airfield after you break out of the prison, so it may be a good idea to send the buzzard ahead to clear them out before you roll in with the scientist. When they’re taken care of head for the pilot who should be waiting there for the plane and take off.

If everyone performed their role successfully, you should be in the clear and a whole lot richer!