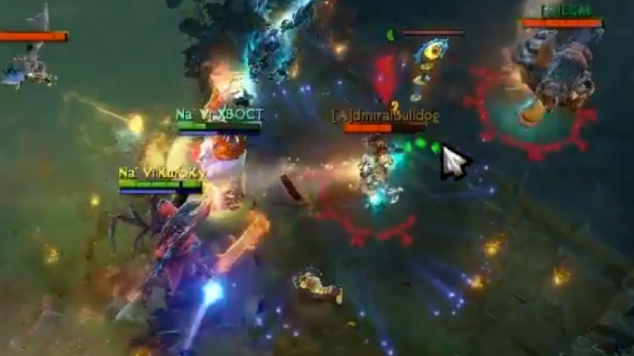 Sometimes it all comes down to one team fight. In Dota 2 you can have a great time laning, get a full item build with gold for days, but if you're not making the right plays when the time comes around for team fighting, all could be for nothing.

Generally starting in the mid - late game, team fights can be a game changer even if one team doesn't completely wipe the other. Any numbers advantage gained can be used to push the enemies towers or go for Roshan. This advantage becomes more deadly as the spawn times increase as well, giving the victorious team plenty of time to run amok.

To prepare you for these rumbles, here is some basic team fight advice that should improve your record no matter the hero you choose.

Prioritize Targets - Depending on the match and what heroes the enemy team is using the focus will change, but for most team fights you will want to disable the Carry while killing the support as fast as possible. The support player is an easy first target for two reasons. Firstly, because they are usually one of the easier heroes to kill having focused their gold on items that benefit the team or replenish resources. Secondly, because it's their job to protect and support the carry. Without their support a carry is a very vulnerable target which should make an easy second kill.

Once those two heroes are down go for any other squishys or players that are the biggest threats (dealing the most damage).

Prioritize Abilities - If you're a carry or other damage dealing class try to save your heavy hitting abilities for the heroes they will hurt the most and avoid wasting them on tanky ones. The same goes for abilities that interrupt or disable, prevent the enemy nukes from getting their abilities off and you'll probably end up saving a team mates life (or yours).

Positioning - For the most part you will want to try and stay out of the central scrum if you are a carry or any other lightly armored hero, and stick the the outer fringes of the fight while staying close enough to attack. Tanky heroes are the ones who end up in the middle as they try to keep their carries safe while making it to the enemies carries.

Know When to Run - Knowing when to run away from a team fight is almost as important as winning one. If the enemy team initiated perfectly on you and has one or more members of your team incapacitated, or one of your teammates was insta-killed by a perfect gank, make for the hills. It will be pretty obvious when a team fight is destined to end in a loss for you so have an escape plan ready.

Know When to Pick a Fight - Are one or more of the enemy team low on health or missing altogether? Are they grouped up closely making a perfect target for an AoE attack? These are the times to initiate a team fight and will drastically increase the odds of your team coming out on top. Learn to look for the signs of a vulnerable team and communicate the info with your allies for the perfect strike.