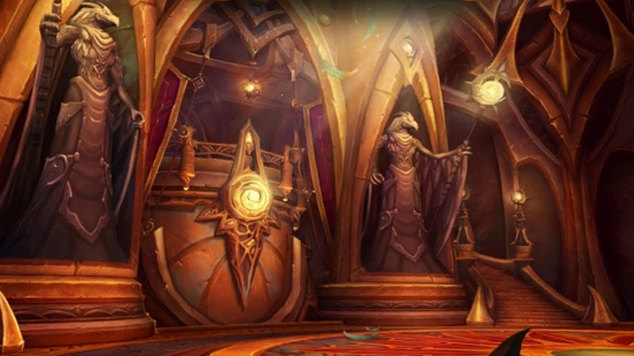 Skyreach is a brand new instance in the Warlords of Draenor expansion that is meant as a levelling instance for players level 97-99.  It can be found in the Spires of Arak zone north of the Writhing Mire. This instance is the center of power of the Arakkoa people and houses a weapon of immense power.

Being a leveling dungeon this instance is full of great upgrades for players the first time they visit it.  The items found here are rare item level 600 items.  Once you have made your way to level 100, Skyreach can be re-visited in either heroic or challenge modes for even better gear.

There are four different encounters in this dungeon, they are: Ranjit, Araknath, Rukhran, and the High Sage Viryx. 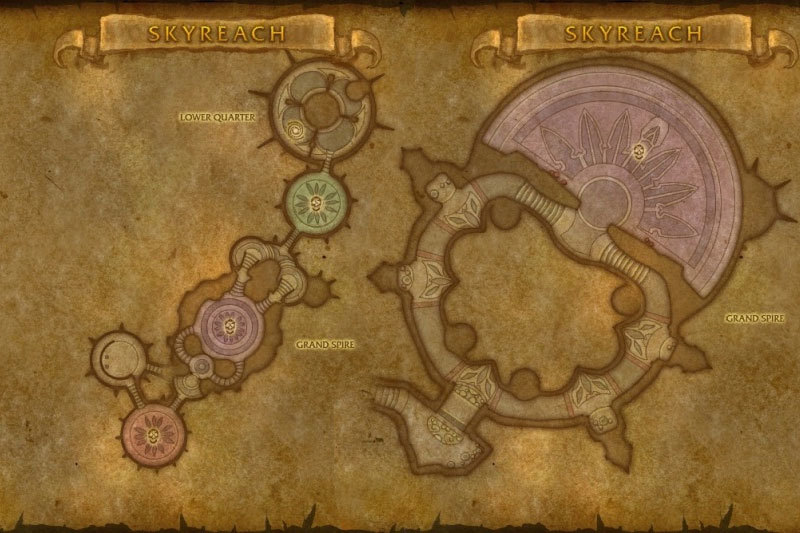 This first encounter is a really fun, fast paced encounter that should challenge players to be aware of what’s going on and to react quickly.

There are really only 3 abilities used in the fight that will cause issues.  The first is Piercing Rush, which targets a random player and charges them for heavy damage.  It can be avoided though by quickly reacting and moving to the side.  This is very important to avoid as the damage adds up quickly.

The second and third abilities are very similar. Ranjit will target random players and through out a Windwall at them which creates a cyclone at their location and deals damage to anyone in the path.  The cycle stays in place and deals AOE damage to anyone that stays where it spawns.  The third ability happens after a few Windwalls are cast and is very similar, it is called Four Winds and sends out four walls of cyclones that split the platform into 4 sections and then rotate around the center of the platform.  Players will need to get into one of the 4 sections and move with it as it turns.  Be aware though that the walls can rotate in either direction so be ready to move either way.

In between all of the movement required you need to DPS Ranjit down to win the fight.

The second encounter in Skyreach is another really simple, but really fun encounter.  The Araknath fight is essentially a DPS race with a soft enrage mechanic, beam blocking as a movement mechanic, and lots of AOE damage.

Araknath has a two main abilities, the first being Smash.  Smash targets the tank and deals heavy damage, but can be avoided by stepping our of the way when he starts to cast it.

Araknath’s second ability is called Burst and deals heavy damage to everyone in the party and can not be avoided.  The healer will need to get everyone back up following this attack.  In addition Araknath gains a stacking buff that boosts the damage of all subsequent Burst attacks, this forms the soft enrage mechanic as it can get to a point where it will one shot players.

To further complicate the fight, there are several constructs around the room that will attempt to heal Araknath throughout the fight. This healing comes in the form of a beam from each of the constructs that will heal Araknath for every second that they hit him for.  To prevent this healing players need to quickly move into the path of the beam to stop it from hitting him.

To beat Araknath you need to ensure that you block the healing beams and to deal enough damage so that his burst does not stack to that it will single shot players.

The third encounter is one that requires fast target switching from players and a lot of movement and planning.  The main mechanic of this fight is dealing with Rukhran’s Summon Solar Flare ability.  When this ability is used a Solar Flare will spawn and fixate on a random player.  The player and flare will be connected by a beam to make it easy for everyone to see who is being targeted.  If the solar flare reaches the player it will explore in a massive Sunstrike dealing damage to the player touched and big damage to all other players.  The solar flare should be stunned, slowed, and killed before it reaches the player.  Doing so will still deal damage to players but much less (roughly 1/5th of what it reaching the player would).

In addition to worrying about killing the solar flare before it reaches the targeted player, you will need to worry about where you kill it.  Each solar flare killed will leave a pile of ash, if another solar flare is killed near any existing pile of ash, a new solar flare will spawn.  If too many extra’s are spawned the group will surely wipe.

While all of the above is going on the tank needs to hold Rukhran and move with him, but stay in melee range of he will start using Screech which damages all players.  The tank must also watch for the Pierce Armor attack and use active mitigation of one kind or another to prevent taking stacks of the Pierced Armor debuff.

The fourth and final encounter in Skyreach is against the High Sage Viryx on his platform in the clouds.  The fight requires players to move and target switch quickly and is a very fun encounter.  Viryx has 3 main abilities that need to be dealt with in the fight, they are his abilities to summon either Shield Constructs or Solar Zealots, and his damage ability called Lens Flare.

The most important part of the encounter is dealing with the Solar Zealots that are summoned with the Cast Down ability.  Once cast a player will be randomly chosen (other than the tank) and a zealot will be spawned a few seconds after above that players head.  The zealot will lift the player up of the ground and start moving towards the edge of the platform.  If they reach the edge, the player will be dropped off to their death.  All players in the group, including the player being carried away, must immediately target the zealot and stun, slow, or root it as they DPS it down before it reaches the edge.

The second mechanic to deal with is the Shield Constructs that are summoned.  While active they will shield Viryx and prevent half of all incoming damage.  This means that you will need to kill the shield construct quickly.  In addition the shield can and should be interrupted, however it can be cast quickly so it will be hard to cancel all of them and it is therefore imperative to kill the construct quickly.

The last mechanic is Viryx’s Lens Flare attack.  This attack will select a random player and follow them with a beam that deals damage and leaves AOE pools of fire on the ground.  Players need to quickly move out of the beam and get away to the edge of the platform so that the center is as clear as possible.

In between killing the shield constructs and solar zealots, and avoiding lens flares, players need to deal enough damage to kill of Viryx.  Overall the fight is an excellent last fight in an instance full of great fights.