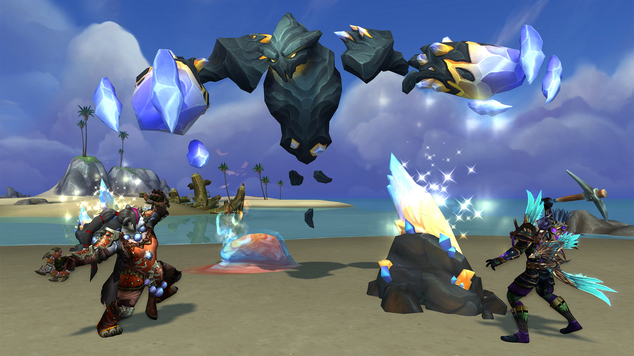 World of Warcraft: Guide To XP Boosts In BFA
Want to level quickly in Battle For Azeroth? Here's all the boosts you'll need.

Whether you’re just returning to World of Warcraft, or making an alternative character, leveling quickly - without buying a boost - will save you considerable time and money. While you’ll still have to invest time into get any character to level 120, using any of the XP increases below will significantly help during Battle For Azeroth.

Occuring once a month, the Darkmoon Faire offers a possible 10% experience buff when participating on rides, or by playing Darkmoon Top Hat. The buff only lasts for 60 minutes, but is worth grabbing if you’re about to turn in a significant amount of quests.

There’s two primary options here for gaining XP bonuses, but both are difficult to obtain and/or expensive. The first is Excess Potion of Accelerated Learning. It provides a 20% experience buff for 60 minutes and lasts through death. Unfortunately you’ll need access to a Garrison in order to obtain them. If you have a Garrison, just head to the Garrison Quartermaster and spend your resources.

For the second option (Elixir of the Rapid Mind) you can grab on the auction house (it’s not cheap). That said, the Elixir boosts your XP gain by 300% for 15 minutes, meaning that if you pop it before handing quests in, or completing a dungeon, you’ll shoot through the levels.

The most powerful XP buff in the entire game, Recruit A Friend provides a permanent buff of 50% XP for kills and quests, as long as you remain partied, within range of each other, and you’re under level 90. Just be aware the buff isn’t permanent (it only lasts 90 days), but it should be enough for you and a friend to reach maximum level in a very short space of time.

When you aren’t playing your character, you’ll accumulate a rested state of 5% of your current level for every 8 hours you spend in an Inn or Capital City. In total you can store one full level of Rest within 7 hours, effectively meaning that when you do log in, you’ll kill enemies and gain a 200% XP bonus until your rest is exhausted. While it won’t help you level quickly if you want to play regularly, it does mean if you have a life, that you can still catch up once you log back in.

Having recently picked up a full set of Heirloom gear, in total you can obtain a bonus of 45% XP from questing and monsters just by equipping the armor. It’ll cost about 2,000 gold in total for the set, and it will scale as you level (effectively meaning you don’t need to replace 4 of your armor pieces while leveling). In addition, as you level higher (past 60) you can upgrade the Heirloom armor set to ensure it continues to scale with you. While the sets aren’t cheap, or cheap to upgrade, they not only remove the need to constantly look for new gear, but also (as noted above) provide a significant buff to your XP. Get Heirloom gear as soon as possible.

Some zones and classes provide XP buffs that are temporary, or require unlocking. For example, you can become Enlisted with the Light’s Hope Chapel in Eastern Plaguelands which provides a permanent 10% buff while in the zone. If you’re a Monk, there’s also an ability you can gain by completing your class quest which provides 50% additional experience for 60 minutes. Keep a look out for zone buffs. Finally, besides the Darkmoon Faire, there's a fair few world events that provide an XP buff. The Brewfest Enthusiast is one example, while the Grim Visage can also be picked up during Hallows End (outside Undercity).

A simple XP buff everyone can obtain, simply head to your factions capital city and turn on War Mode (from your character’s Talent menu). It’s an instant 10% buff that’s permanent, just be prepared to get into the odd fight (or be ganked one or two times). It’s still worth it.

Think I've missed something? Let me know and I'll add it to the list. Big thanks also go to Dawnstor, Violence Reborn, Eric Cattino and Boomjack for helping me pull this list together.