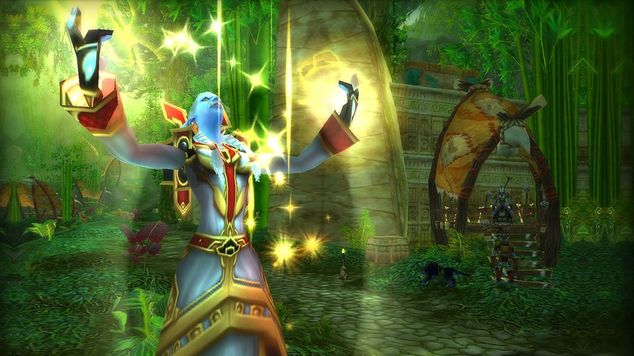 Priests are and have always been the spiritual leaders in World of Warcraft. However, they do far more than hide away in their places of worship. Armed with spells granted by their deities, Priests can be found throughout the world adventuring alongside other formidable heroes.

While many may see the Priest as only a healer, they can also call upon their powers to do incredible damage. Able to tap into the Holy and Shadow side of their belief's, Priests are a formidable force all on their own. With that being said, Priests healing prowess is nearly unmatched. The only role Priests cannot fill successfully is that of a tank, but in both healing and damage, the Priest truly shines.

Priests, as briefly mentioned above, are capable of filling both damage and healing roles. Using their spiritual connection to cast spells, the Priest is a totally ranged class. While the Priest is typically considered to be a “squishy” class, they have numerous defense spells that will allow them to take a hit or two. With that being said, tanking is most certainly not on the list of things a Priest should take on, at least for those Priests who wish to stay alive.

Besides being able to cast powerful spells to do damage and healing, Priests also provide valuable utility spells. With powerful shields, buffs, and much more, Priests are a well rounded class that compliments any group. Playing the Priest is never a dull experience.

Many races are able to become Priests, leaving a plethora of options for the player. This is a great class to choose if you are uncertain of which race is right for you. Race options include: Draenei, Dwarf, Gnome, Human, Night Elf, Worgen, Blood Elf, Goblin, Tauren, Troll, Undead, and Pandaren.

Every Priest comes with a core set of abilities that are common to the class. These abilities are very distinctive and tend to define what makes a Priest a Priest. These abilities are able to be used by all Priests, regardless of the specialization they ultimately choose. Examples of such abilities include: Levitate, Smite, Fade, Shadow Word: Pain, and Inner Fire.

Besides spells, Cloth armor is also standard for all Priests. Unable to wear any heavier armor, Priests will never be on the front lines. However, this armor is perfect for mobility, provides the stats the Priest needs, and looks good all at the same time.

On the weapons side of things, Priests have far more options than they do for armor. Weapons available to your Priest include: Daggers, One-Handed Maces, Staves, and Wands. No heavy two-handed swords or axes for this class.

Mana is the resource Priest's use to fuel their spells and abilities. Mana starts out full until a spell is used. Mana can be quickly regenerated by drinking in game. Mana also regenerates slowly by itself. Mana Potions are also available for restoration in a pinch. Stats on gear can increase the amount of Mana the Priest has.

As the Priest levels they will eventually be asked to choose one of three separate specializations; Discipline, Shadow, or Holy. Each of these three specializations will take the Priest down a different path, offering up different skills along the way. Discipline Priests will use their link to their gods to smite down enemies, while still being able to shield and heal their allies. Shadow Priests tap into the dark side of their magic and focus on damage over time spells to eradicate foes. Holy Priests on the other hand focus solely on healing, able to heal individuals or groups with ease.

Each specialization will offer the player a totally different play experience. Feel free to pick whichever specialization best suits your personal play style or try them all to mix things up a bit! Every Priest spec is currently viable in game. The Priest is always a welcome addition to every group no matter if they are doing damage or casting some epic heals.