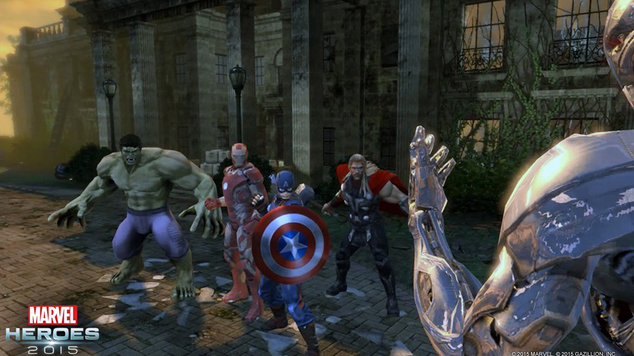 Age of Ultron Invades Marvel Heroes
Ultron will be invading more than just our theaters this weekend, as Marvel Heroes adds a slew of new movie-ins

With the launch of Marvel's second Avengers movie: Age of Ultron, the developers for Marvel Heroes 2015 have some unique content and perks coming to the game this month, most of which is completely free.

One of the most notable features is that Iron Man will be playable for free for the first time ever, and any players who log in and play as him or any other of the movie's team of avengers (Hulk, Thor, Captain America, Hawkeye, and Black Widow) on Saturday May 2nd, will unlock a free month-long XP boost for the entire month of May!

The game will also be adding costumes for all of the lead Avengers matching the costumes from the movie, including both Iron Man's Hulkbuster Suit, and his MK43 suit - the latter of which will be given for free to players as part of this Avengers Age of Ultron promotion.

Additionally new content will be added for the higher XP range, where a team of players can defend New York City against an invasion of Ultron's sentinels. Several characteres featured in the movie that are already in the game will also be seeing new sets of abilities.

Most notable of all, the team has revealed that Vision will be the 47th playable character for the game, and will included power sets that revolve around: Density Control, Solar Power, and Andriod robotics.

If you want to see this game in action, join Veluux as he streams Marvel Heroes at 6PM Easter today!