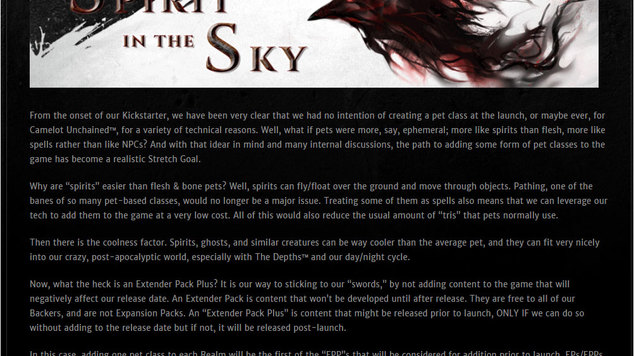 I absolutely love pet classes but I also think it's fair to say they're always a disaster. I've never known an MMOG provide a class that has a reliable pet that doesn't succumb to one issue or another. Whether it's nightmarish pathing, clipping, slow attack animations or dying to an abundance of area of effect skills, they're almost always a headache. Even ArenaNet in Guild Wars 2, two years after release, are still struggling to address these problems. Over at camp Camelot, it looks like Mark Jacobs has found a solution. For the pet classes they intend to release before launch (if able) or as free content afterwards, pets will be Spirit animals. As ghosts and with many of these Spirits acting as spells they'll be easily added to the game. Mark goes on to state:

"Why are “spirits” easier than flesh & bone pets? Well, spirits can fly/float over the ground and move through objects. Pathing, one of the banes of so many pet-based classes, would no longer be a major issue. Treating some of them as spells also means that we can leverage our tech to add them to the game at a very low cost. All of this would also reduce the usual amount of “tris” that pets normally use."

In addition to the above, Mark also discusses as to how they're going to go about implementing these classes and that it won't stretch the team and their focus.

Although there's no news as to how the classes will actually work, I think this outline is a perfect start for pet classes and it's one that gets me genuinely excited. You can read the full post, here.