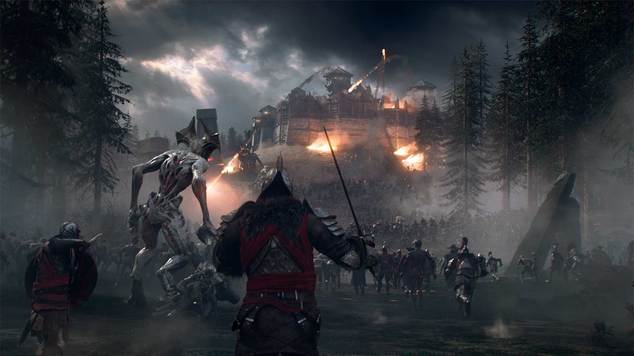 Everything Known So Far About New MMO, New World
Here's all the information you need (but much might have changed!)

Everything Known So Far About New MMO, New World. New World may have changed significantly since it went dark after its Alpha period, and I hear on the grapevine that much of it has. However, there's still a lot of information out there, and over on NewWorldFans, they've pulled together of everything we know so far. As noted, it's highly likely a lot of it is out of date, but it's still interesting to see where development went. Take a look below, and be sure to head on over to their site to check out what else they're up to.

Amazon's New World takes place in Aeternum, a supernatural island which is home to a dark power. As the latest wave of explorers, players face not only the island's dangerous and corrupted wildlife, but also the undead remains of previous expeditions, that have been lying in wait for centuries.

There is another reason so many are drawn to Aeternum, because Azoth, the same substance that can corrupt those who come in contact with it, is also a rare and powerful material, which plays a vital role in the game as it can empower players, foes and items.

The game was originally framed in the mid-1600s colonization period, but has since shifted towards a more fantasy-focused setting. As a Sandbox- or "Open World"-MMO, it aims to set itself apart from previous online games by offering players a vast world to explore and a lot of freedom when it comes to playstyles.

While the term "survival" has often come up when describing New World, the few survival elements that the game had when press and media last got their hands on it have supposedly since been removed. At that time, players started with nothing but a few scraps of clothing and had to gather sticks and stones to build their first tools and crude weapons. They also had to scavenge for water and hunt wildlife for food, which could be prepared at campsites that players could freely place in the world and acted as a first, basic crafting stations. It is unknown how much of these elements are still in New World at this point.

As players explore the map, they'll fight not only wildlife but also a variety of undead and supernatural enemies. Their main foe however is a faction called the "Corrupted". They are cultists empowered by the ancient corruption on the island, that have erected fortifications and seek to erase all life on the island - or enslave it to the corruption.

Combat is inspired by Dark Souls, meaning there is no tab-targetting like in most other MMO games. Instead, action combat lets you freely engage enemies with aimed attacks, with blocking, dodging and general positioning and timing being main elements of PvE and PvP engagements. Ranged weapons also have to be aimed manually and most likely the same will be true for magic attacks, which have not been revealed yet. There is player collision.

Gathering and crafting play a vital role in the game, next to exploration and combat, and are explained in more detail in their own sections below. Another major focus is territory control and mass sieges - either aginst other players or hordes of Corrupted.

There are no traditional classes in the game. While you gain experience and level up just like many players are used to from other titles, attribute and skill points can be freely distributed in whatever you want to focus on. It is uncertain if we will have traditional roles such as tank, healer and DPS in the game, but the armor and items we've seen so far hints strongly at that being the case, through character and equipment customization rather than pre-determined classes and skills.

For example you could focus on heavy armor and shield and take the role of a frontline fighter. Or you can use leather and bow and stay behind your better-armored companions while you engage enemies from range. Magical healing gauntlets let you take on more of a support role, and we imagine all these roles can be mixed and matched using the free skill system. A plate armor wielding battlemage might be possible in New World. The system allows you to specialize as you see fit using Weapon Masteries, or even completely ignore combat skills and become a Master Craftsman or Trader. It's possible to respec (at least early on), allowing players to experiment with different combinations before choosing their path. The skill system is also said to allow for "endless progression".

PvP is a major part of New World, although it has apparently seen drastic changes in the last six months. It is currently unclear whether or not players can "opt-out" of PvP completely - something that has sparked fierce debate in the community. While there is a possibility to engage in PvP with other players and even fight massive battles over territory control, we are currently speculating about several possibilites how this is implemented, based on vague interviews:

Last time we saw New World in action, players dropped loot when killed in PvP, but it is unclear if they drop everything or just parts of their inventory.

PvP is very skill-based due to its action-oriented nature, and player stats and attributes don't play as much of a role as in other games. In fact even a 10-level difference in player levels is supposed to be surmountable, meaning a lower level player should be able to beat a higher level player purely depending on skill.

Not much is known about the PvE content in New World yet. Earlier in 2019, the closed Alpha was shut down in order to focus more on PvE and introducing vast changes, and AGS has yet to reveal exactly what they came up with. Apparently they've added quests to the game, though, in order to provide players with a more structured gameplay experience.

Another feature that we already know about is Invasions, where hordes of corrupted or undead will assault player settlements.

Whether or not this feature is supposed to be New World's "endgame" PvE content remains to be seen. There is no information about dungeons or raids.

Settlements are one of the major selling points of the game. Players can create organizations in the form of companies (guilds or clans in other games), and take over several of the claims that are scattered around the world map - if they are strong enough. These claims can be developed into full-blown player cities, with crafting stations, fortifications and a tax system.

Settlements will also allow for player housing, even granting access to players outside the owning company to build their houses and farms there, in exchange for taxes and support in war.

It is not known currently if these settlements can be built freely or come pre-built.

Settlements can be attacked by other companies during war or by NPC invasions.

Sieges are a way for companies to remove their enemies' claims from the world map and take over their settlement. They are pitched as massive 50 vs 50 battles between companies, although it is not currently known if that is a hard cap or if more players can join the fight.

There are three factions in the game that players can join, offering structured PvP outside of company vs company warfare. Not much is known about these factions or how the faction PvP system works.

Companies are player-created organizations that offer a hierarchical structure. Companies are limited to 50 players and it is not currently known if they can form alliances with other companies. They can however declare war on each other, during which players can freely attack opposing companies and eventuelly launch a siege on their territory.

Twitch integration is planned, which would allow streamers to interact with their viewers in-game and invite them to "streamer armies". Streamers can also flag themselves in-game so other players know who they are interacting with and can look them up on Twitch. Not much more is known.

The map of Aeternum is large and can hold over 1000 players at the same time. Areas have different types of resources and biomes. 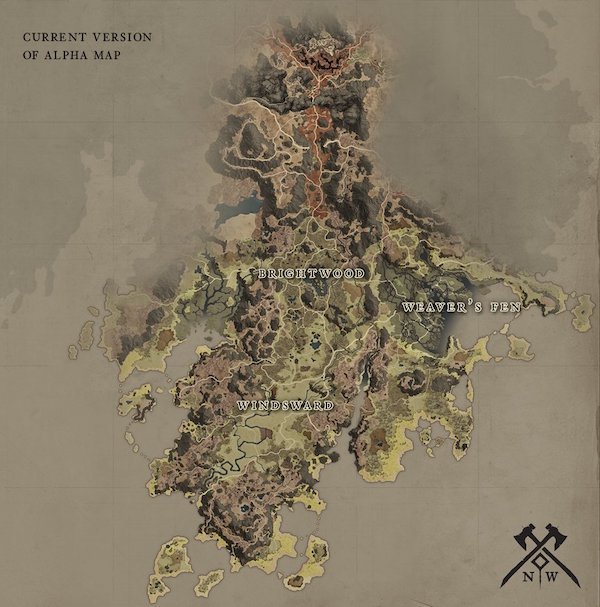 Crafting is a major focus of New World and currently the following crafting professions have been seen:

Other lifeskills that are hinted at:

Keep in mind that some of these were only placeholders in the interface last time they were shown in a video and may have been removed or changed since then.

Items can be salvaged to get some of their base materials back. There is also a repair skill.

Players can buy (or possibly construct) houses and decorate them. They can also acquire trophies and mount them on the walls of their house, offering bonuses that may help them in combat against certain creatures. One of the pre-order bonuses is a pet for your player house.

Nothing is known about mounts at this time.

Weapons, Armor and other Equipment

The following weapons and off-hand items have been spotted so far:

Armor comes in many different sets of Cloth, Leather and Heavy Armor.

There are also rings and amulets that provide bonuses to resistances and other attributes, as well as potions and poison coatings.

Items have a tier, gear score, and a wide range of different defense and absorption bonuses against physical and magical attacks.

The inventory is limited by weight and so is the equipped gear. Banking is available in player settlements in the form of storage buildings. Equipped weapons have to be dragged to the hotbar in order to be used and only 3 weapons or tools can be equipped at the same time.

Magic will be in the game and magical gauntlets and staff weapons have been shown as concept art or in screenshots.

New World will have in-game voice chat. There are also emotes and in-game titles.

A closed Alpha under NDA was running from the second half of 2018 until June 2019.

A closed Beta without NDA will start in April 2020. You can sign up here for a chance to get invited or pre-order New World for guaranteed access.

New World release is set for May 26th 2020 and the game will be available on Steam. You can also buy it directly from Amazon, but even then you will get a Steam key and launch the game through Steam.

There will be optional in-game microtransactions.

Pre-ordering gives you the following bonuses:

The New World MMO is developed using the Lumberyard engine, Amazon's own proprietary game engine which they have based on the popular CryEngine. It's also of course backed by Amazon's own cloud on AWS.

Development supposedly started around 5 years ago, along with several other titles, of which some have since been canceled. Next to New World, Amazon is also working on a Lord of the Rings MMO.

New World MMO is only available on PC.