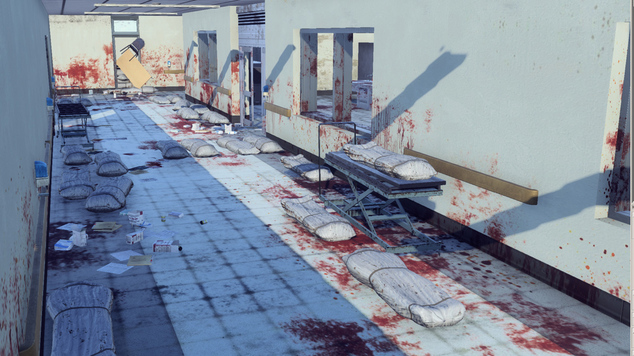 In the upcoming October update for H1Z1, the developers over at Daybreak Games (now in a brand new studio!) are planning to add several new elements to spice up the gameplay.

If you got a chance to check any of the H1Z1 dev team's latest Twitch livestreams, then you've already gotten a sneak peek of this new building complex being added to the world map. The hospital will be a multi-building complex that features tons of new interesting props and a look and feel that further intensifies the feeling of a zombie apocalypse. There will be keys and corresponding lockboxes, and a few other interesting nuances hidden in the carefully crafted Hospital setting.

Two-person ATVs will also be entering the mix, with a seat for the driver and room for a companion riding shotgun on the back rack - literally, he will probably need one, as a more significant addition is implemented to H1Z1:

If you thought for a moment that the ladies were somehow immune to the H1Z1 virus - you are dead wrong. Female zombies are being added to the game, complete with their own unique artwork, animations, and female voice acting (check out the video below for a sneak peek at that production. Make sure you have your finger on your volume button, the end is quite thrilling, to say the least.)

These zombies (and others) will now sometimes be dressed and clothed as they were in the state that they died in. That might mean a police officer in uniform on duty, or maybe a hipster in jeans and a flavored t-shirt. Expect to see some new variation in zombies (and potential confusion between who is a survivor and who is walking dead).

This has been something I've been critical of with H1Z1 for quite a while; especially considering what we'd been teased with H1Z1 getting some of the same new AI experimentation and R&D that the developers hope to utilize in EverQuest Next.

Expect these new zombies (if all is working correctly) to have increased awareness of your presence (no more running up and getting free shots on unsuspecting dead). Additionally, some hording mechanics should be present, as zombies will be coordinating with each other once you've drawn their aggression.

Add to all that some changes to how crates will be deployed and how the items in them will be handled, and players should expect to see some impactful changes to the general experience. There will no doubt be some love/hate for these changes and additions; but when it comes to cash shop transaction there will always be a difference of opinion. Money changes everything.

Last but not least, all of these additions require a full world and player wipe and some consolidation of playable servers. There is a full list of the new servers that can be found on the game's official reddit page. So go check that out if you're curious for more information - as it also contains more details of the rest of the features I've listed above.