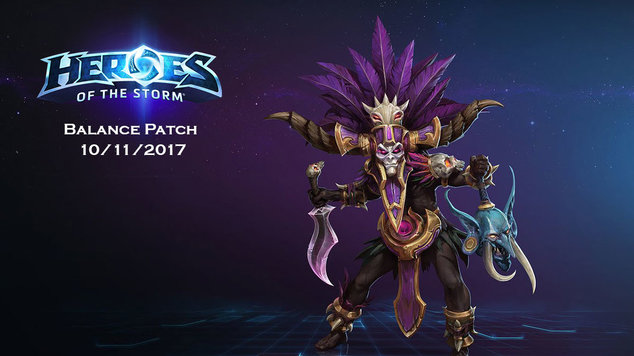 Heroes of the Storm: Patch Notes 10/11/2017
A balance patch squarely aimed at nerfing specialist and support heroes - Nazeebo and Stukov in particular - is

Yesterday's HotS patch was particularly brutal to specialist and support classes - Nazeebo seems well and truly ruined as his Corpse Spider talent at 16 has been gutted. Stukov was likewise heavily nerfed, with his blind also removed. It's not all bad news, however, as Johanna and a few other Warrior heroes received some much needed tweaks.

Full balance patch notes follow, or you can view them on the official site:

Developer Comment: We want to shift more of Nazeebo's Health into the amount of Voodoo Ritual stacks he has, as the reward for Voodoo Ritual was mostly felt in unlocking Vile Infection at level 20. We're changing Spider Colony to no longer reduce the cooldown of Corpse Spiders, because the synergy between the Spider Talents were so high that if you picked any one of them the rest of your Talent choices were locked in. Since we are changing the level 16 Talent to now affect Plague of Toads instead of Corpse Spiders, we're shifting some of the damage out of Plague of Toads into Corpse Spiders. For Superstition, we wanted to get most of the spirit of what the old Talent did, but have more gameplay interactions. Often the only counter play to Superstition lied in what the enemy team composition was, and we'd rather have more counter play relying in decisions made during the course of the game.

Developer Comment: Ana has had an incredibly successful launch into the Nexus, and seems to be falling into a great place balance-wise. We are still light on high-level data for her, so our changes this patch are very light. We realize that she has some synergy concerns and wanted to get a small jump on the largest catalyst to those – Overdose. While playing her internally before launch, we knew she had the potential to single-handedly shift the meta, not to mention increase the amount of double-support we see. Rest assured that we are keeping a close eye on both of these concerns and are prepared to act accordingly if the need arises.

HotS: Patch Notes - April 14, 2020
The Dark Nexus II event is here! Tassadar gets a rework and more!
News
Heroes of the Storm