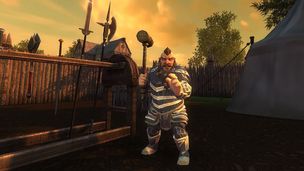 One of the most common ways to initiate PvP in Pathfinder Online will be through raiding. Raiding, in this case, is meant more as a term for small group invasions of settlement outposts to relieve them of the burden of their supplies rather than its usual meaning of having large groups take down an enemy NPC.

In Pathfinder Online, outposts will generate supplies every 60 minutes, so there will be something worth stealing from them every hour. Those supplies can accumulate over time if theyre not delivered to settlements by players. And all raiding players need to do to get them is gather a force, take out any NPC guards in the way, and claim the loot for themselves. Of course, defending players can put a kink in that plan by defending the outposts personally or assigning guards from their settlement to help defend it. So a well-planned and timed attack would be wise.

Although raiding doesn't necessarily require careful organization, there are benefits to be gained from better planning. Watching a PoI or outpost for a while to learn its collection cycles, making pre-raids to disrupt these cycles, or feinting to distract the defenders all might result in a better payoff for your main raid. As well as just building your team for martial might, it is also worth considering bringing along a player with some skill in cultivating the resource found at your target outpost. The more skilled your group is in cultivation, the better they will be able to take advantage of a process we call "strip mining."

Strip mining, as mentioned above, also allows invading raiders to quickly bleed an outpost by rapidly harvesting all its crops, butchering livestock, or mine its ore, which could do harm to the outpost while allowing you to fill your pockets with loot, leaving a path of destruction in your wake.

Lastly, the blog touches on flags for hostility, which are a variety of ways that players can appear hostile to each other. This can be anything from a faction flag to being at war or something as simple as being a criminal. Regardless, if a player appears hostile to you, you can attack them without a reputation or alignment penalty. Read more about how this can occur in the full blog.