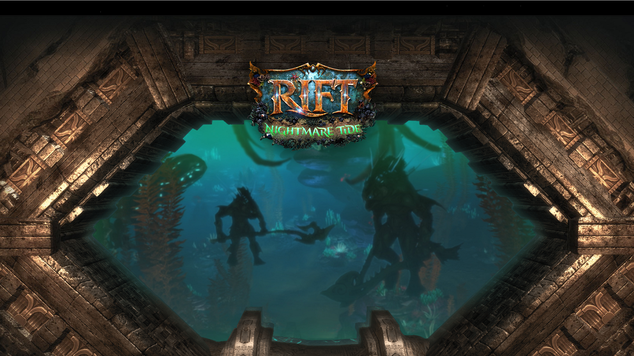 In celebration of RIFT's one year anniversary of converting to a free-to-play system, executive producer Bill Fisher published a producer's letter announcing RIFT: Nightmare Tide. Nighmare Tide is RIFT's next major expansion, which will take Ascended to the Plane of Water. Now, rather than waiting for the invaders to rip holes in Telara and wreak havoc across the lands, Ascended can take the battle directly to the lands these invaders come from.

In Nightmare Tide, you’ll dive into adventures in brand new open-world zones and story quest lines. You’ll team up with other Ascended and test your mettle in new planar dungeons, raids, raid rifts and slivers. You’ll take part in massive dynamic battles in the Plane of Water, seek out new artifacts and collections, and craft new weapons and armor. Access to all of this content will remain absolutely free – part of our promise to you since converting to our highly successful Free-to-Play system.

Nightmare Tide will have a set of new features that made RIFT so much fun in the first place: new dungeons, new raids, new rifts and new slivers. In addition to new, yet familiar things expected with any game's expansion, RIFT also introduces something new: minions. Minions are account-wide collectables and “you will send them on missions where they can gather resources, collect currencies, find items, and gain their own levels. To reap maximum rewards, you will have to choose wisely, matching your minion’s strengths to the mission at hand.”

On paper, this sounds like a very cool concept and I look forward to seeing how it actually plays out. I don't think I've seen something like this in an MMO yet, at least not one I've played. Without going too far into conjecture and speculation, it sounds like these new minions will end up doing a lot of the tedious parts of MMOs for you, so you can stick to the fun parts: killing stuff. I do enjoy taking time for mindless resource farming, but it's not something I always look forward to doing. If RIFT can pull this off so minions are rewarding to players, this could turn out to be something interesting and, dare I say it, innovative.

More new things to expect for Nightmare Tide include a level cap increased to 65, new equipment slots (unlocked for your account by purchasing Nightmare Tide or per character by “investing time and resources”), new loot and the Mastery system. Mastery based on your Calling, rather than Souls, expands your builds and lets you further customize your character.

Are you looking forward to Nightmare Tide? Will you be logging into RIFT to catch up on the story before the expansion, if you're not already playing? Feeling meh? Personally, I look forward to learning more (the Nightmare Tide page is rather empty right now) and setting some time aside to wander around in Telara beforehand.