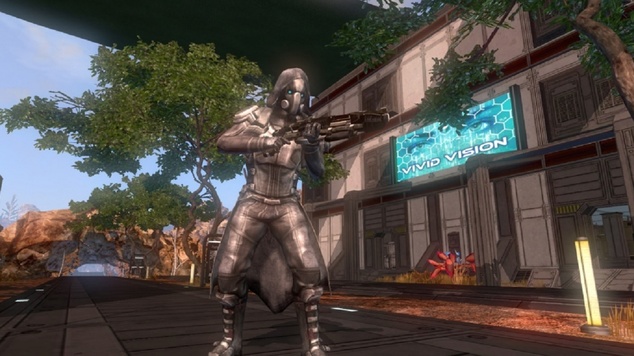 The Repopulation's End of October Report
Above and Beyond manages to cram a ton of new updates into The Repopulation each month, with this one seeing th

The Repopulation continues to add in tons of changes, additions, fixes and whatnot on the monthly, which can be seen in its October 2014 Report. To catch up, head over here to check out the End of September 2014 Report, as well as the latest trailer Above and Beyond Technologies put together for the current alpha test. Above and Beyond manages to cram a ton of new updates each month, with this one seeing the additions of player-run shops, modifications for vehicles, mounts gaining abilities, housing plots for cities, storage for plots, and cosmetic styling.

Probably the biggest news, though, is that alpha access is changing. It was recently changed so that those at the $50 pledge level would be granted access. Now, beginning November 21, those who have backed at the $25 level will be given access. I'm sure this will expand the current playerbase significantly. When The Repopulation releases, it will be a free-to-play game, but since it is still in the alpha phase of testing, that could be awhile off. For $25 to play an anticipated sci-fi sandbox MMORPG now, while submitting crucial feedback, testing out current systems and throw some bones towards development costs, well, it's not a bad deal. Servers are up regularly, usually only brought down for maintenance. In order to take advantage of this deal, anyone interested must purchase a pack at $25 or more by end of the day, November 20.

Player shops have been added in, which anyone can set up from their housing that is within the persistent PvE world or in cities. Players can set up shop in their homes for other players to visit. If you are particularly fond of a particular shopkeep, you can subscribe to their shops, which comes with the ability to browse subscribed shops remotely. If you're out and about and decide to buy something from a shop you're subscribed to, you can purchase that item remotely and then either manually go to the shop or pay to have it delivered to you.

The new player shops aren't the only addition to housing. Dynamic housing plots have been added to cities. Because cities can now store housing data, an entire plot can be picked up and moved to another plot within the city, and even back again if you choose. Being able to move housing plots will be important for when you set up in a city and the owner decides to abandon plots. Even though everything in the plot will belong to the player, sometimes they will have to move, which will add another layer of dynamism to the game.

The city owner can vacate the plot at any time, but control and ownership of the plot’s structures belongs to the player that the plot is assigned to. If the plot is vacated the player can then move the plot to a new location if one can be found. Players can also store an existing housing unit and move it to a vacated player city plot if available allowing a lot of flexibility for housing placement.

Vehicles received a physics pass to give each vehicle a unique feel. An upgrade system was added in, giving vehicles 3-5 upgrade slots, such as the engine, gun, exterior, etc. Upgrading these slots can give your vehicles passive buffs, such as increased acceleration. Other perks from upgrading can grant your vehicles new abilities, usable while controlling your vehicle. These can be defensive, such as shielding, or offensive, like being able to drop mines. Tamed mounts also have been able to gain offensive capabilities now, with each type of mount getting its own unique abilities. Speaking of tamed mounts, tamed pets have received a bit of changes, as well.

Genetic Engineering headlined the list of pet improvements this month. This system has been completely revamped to make it more customizable, and introduced new pets. There are also more varied ability styles between the different breeds. Tamed pets now have additional species which can be tamed.

UI upgrades include the ability to bind /slash commands to hot keys, which can be created by right clicking on empty action bar slots. Doing so will make an editor pop up, which will let a player select an icon and a command. This includes new commands added in, such as /gearswap. Now players will be able to switch out gear in their containers while out of combat instantly, or in combat, but with penalties. The Vehicle Window has been revamped to be more condensed, with vehicles getting new icons, upgrade slots on the window, and more informative tooltips. A new World Map has been implemented, but is in an early state of existence. This can be accessed via Shift+M.

Other workovers include the Cosmetic Styling skill, which includes new dyes added in. Armor isn't the only thing you can dye in The Repopulation. If you get sick of your hair color, you can dye that. I'm hoping to see some sweet mock commercials featuring men dying the grey out of their beards once the NDA is lifted. I'll draw you crappy MS Paintings for your troubles! Also added in are new bounty collectors added in for Rogue Nations. Rogue military can drop insignias for other nations to hand in, and Rogue Nations can switch to reserve military for protection. The backer perk for players to have NPCs of their design added into the game has also begun to be inserted.

The full notes on changes can be seen at the End of October Report, while details on testing (including links to where to purchase crowdfunding packs for alpha access) can be found at this article. If you're playing The Repopulation, be sure to let me know how you're enjoying it (or not!) once that NDA is lifted! I'm pretty excited about that, since it is rumored to be dropping soon, which means we should have more public discussions going on about The Repopulation. Y'all should know by now that I'm big on community reactions to news, so I'm really stoked to be able to start adding that in, which is hopefully soon!