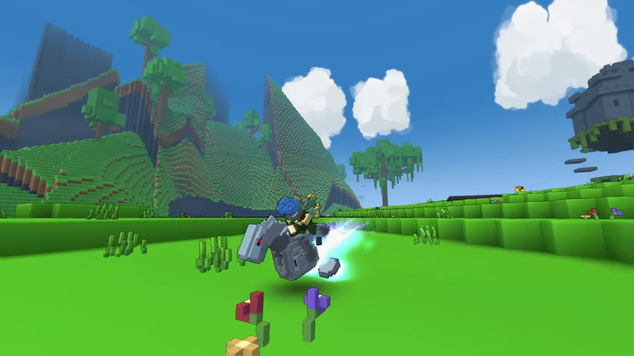 Trion is having an open play weekend starting today for its voxel-based building and adventure MMORPG Trove, which is still in development. The only thing needed is to have a Glyph account. Starting at 11a PT/2p ET, Trove will be available to download. No extra effort would be required on your end, as Trove, as soon as its available, will magically show up in available games in the Glyph client. You'll be able to romp around and explore the lands and enjoy a Shadow's Eve-themed romp or check out some worlds created by fellow players.

Shadow's Eve is the in-game Halloween based event for Trove, which will be running through November 2. This event will be in full swing during this weekend's free play session, perfect for people who both enjoy getting some hands on play time with a game that's normally only available as a closed play test, while also getting their Halloween on. Considering that Trove itself is brightly colored like a bag of candy, it's kind of perfect. There's a Peaceful Pumpkin Lair to visit, where you can grab some merry orange squash for your garden and gather goods to craft a Smashing Pumpkin recliner. Seasonal loot available for a limited time includes the Caskart Mag Rider and Autumn Pinata mount. Players can also craft Nightmare Mystery Boxes from collecting Candy Corn obtained from Autumn Pinatas and Shadow Arenas. These new boxes have chances to drop seasonal recipes, hats and even a Black Cat pet.

During this free play weekend, players will be able to check out the new Mastery Rank available in Trove, which can be seen from the character sheet. Mastery not only represents classes and professions, but also collectable such as unlocked styles, pets, mounts, mag riders, recipes and costumes. Everything you do in Trove grants points towards the next Mastery Rank, which unlocks new rewards each level, such as new cosmetic items, credits, Cubits, crafting materials, and stat bonuses.

Another fairly new addition to Trove is Gardening. By adventuring throughout the lands, you can come across items that will let you take a break from all that exploration and fighting, while finding peace digging through soil. Grab a sponge and head on over to the Sun Shrine, found in the Peaceful Hills, where you can soak up water for your garden. If you're new to gardening, Primal Blocks are a good place to start for planting options. Lumina is a suggested next step, which can take on the color of light they're grown under. New mounts can be crafted from planting Steed Feed seeds and harvesting what grows. Other plants can grow up to become loot. The better your gardening skills, the more valuable the loot you grow becomes.

Starting tomorrow at 8am PT/11am ET, Trove will become one of the games sponsoring Extra Life. Trion will be streaming games for 24 hours straight from their offices, giving away exclusive items during this time. If you're interesting in joining the Trion team, you can sign up at Extra Life to play games and help kids. If you're not familiar with Extra Life, it is a gaming themed drive where gamers team up to raise money for the Children's Miracle Network. To sweeten the deal, companies like Trion also host tons of giveaways to increase interest and awareness. Extra Life is one of the greatest things that gamers, as a community, come together and participate in.