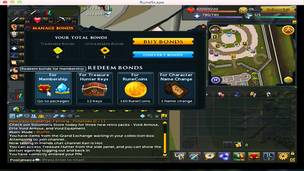 The players were given a chance to vote on a new 2007 Old School server for RuneScape and they exercised the option. Last week Jagex launched the new server and left voting open to see just how much support that the new server would get. Nearly 450k players voted in the poll, prompting Jagex to add a small development team to create new content and evolve the server in a different direction from existing ones. Voting fell short of just 50,649 votes of getting a full development team, which would have been added at 500k votes.

All RuneScape members will have free access to the server for the next six months. Game updates will be voted on in new polls for the Old School server, allowing players to have a further say in its evolution.

You can check out the Old School RuneScape server here.

Over 450,000 Members cast their VOTE as OLD School runescape 2007 Vote Draws to a Close

Friday 1st March 2013, Cambridge, UK  Jagex, the creators of the hugely popular and BAFTA nominated free-to-play adventure game, RuneScape.com, has closed the vote concerning the fate of Old School RuneScape. In the space of just two weeks, almost half a million RuneScape members decided to show their support to recreate a the August 2007 version of the game, which will open to all players with RuneScape membership today.

Following the spirited level of support from the community, a preview version of the 2007 game was launched last week to RuneScape members who had already pledged their support. Now the vote has closed Old School RuneScape will be made available to all RuneScape members.

Over the next 6 months the service will remain free to all RuneScape members at no extra cost, and will benefit from a dedicated small development team. The community will decide the fate of game updates with regular polls being held to decide which game features should be brought or even removed from Old School RuneScape.

Although this is only a fraction of the overall RuneScape membership, its incredible to see how such large numbers of our community are prepared to mobilize for issues they are passionate about, said Phil Mansell, RuneScapes Executive Producer.  It was clear very early on that there was a dedicated movement in our community for this project. We can therefore commit to the promise that the future of these servers are secured and their updates will be left entirely in the hands of our community to decide.  Well be holding regular content polls which will allow them to help shape and direct which content or fixes they want implemented into the game.

Mansell continued We certainly could not have brought this content back without our communitys support and commitment, they are at the centre of everything we do at Jagex.  RuneScape has always been influenced by its players, and 2013 will be no different, when the community speak we aim to please!  This year is going to be our biggest year ever and our players are going to be right in the heart of it.

RuneScape as it was in late 2007 has often been heralded as one of the defining periods of the game by its players.  Since 2007 the main game has undergone significant improvements, including a completely new graphic and audio engine, upgrade of its combat system and with additional quests and game updates added weekly.

The Old School RuneScape servers are now live and are available to RuneScape members to play at www.RuneScape.com/oldschool.

Thanks to its character-class-free skill system and elective gameplay, there are no limits to the hero players can become, no quest you cannot complete and no requirement to collaborate with others or face them in player-versus-player combat unless you so choose.  RuneScapes distinctive role-playing style rewards players who think strategically and play smartly. Its witty, intelligent tone, finely balanced gameplay, epic questing and myriad in-world diversions combine to create a game that has earned its place as the most popular free-to-play massively multiplayer online game of all time and continues to push the boundaries of online role-playing games.

Jagex is a multi-award winning online games developer based in Cambridge, England. Jagex specialises in the development of high quality browser-based games with supporting platform and technology. Jagex is also the largest independent games developer and publisher in the UK.

Jagex has a long-standing reputation for creating the world's best online games and for developing hugely popular, high quality, accessible, free-to-play games and for providing an unbeatable community experience for millions of players around the world. Jagex has developed and self-published over 40 online titles, including the world's most popular free multiplayer online game, RuneScape.com.