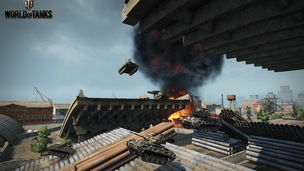 World of Tanks Upgrades Physics with 8.0
<p><em>World of Tanks</em> gives its physics engine an overhaul and rolls out new tanks with the launch of 8.0

World of Tanks players should notice a bit of a different experience when they log in today. Wargaming.net has been hard at work making changes to the way physics operate in World of Tanks and those changes are now live. The 8.0 update rolled off the assembly line today to add new tanks, new achievements, major changes to in-game physics and more.

Patch notes for the update are now available. Check out the official press release and 8.0 preview trailer after the break for more.

Need some help learning the ways of the tank? Be sure to check out our World of Commanders website to learn more.

World of Tanks Rolls out New Look and Feel

26th September, 2012  Wargaming is proud to announce that Update 8.0 for its free-to-play action MMO World of Tanks goes live on September 26 for North America and on September 27 for Europe. The most important upgrade since the game's release in April 2011 brings major overhauls to the game's in-game physics engine, bringing realistic tank behavior and numerous tactical opportunities for the players.

Along with the improvement, Update 8.0 adds a newly optimized user interface, enhanced rendering system for more lifelike and realistic visuals, as well as adaptive camouflage and new mini-map functions. Players can also now choose the combat mode type before entering the battle and transfer free experience into crew experience.

In addition, the USSR tech tree has been expanded with four new tank destroyers, and the first premium British machine, the Matilda Black Prince, rolled into the in-game shop for purchase.

About World of Tanks

World of Tanks is the first and only team-based, massively multiplayer online action game dedicated to armored warfare. Along with solid graphics, the game provides more than 160 tank models of the mid 20th century vehicles from United States, Germany, the Soviet Union, France and Great Britain carefully detailed with historical accuracy.

Wargaming is an award-winning online game developer and publisher and one of the leaders in the free-to-play MMO market. Founded as a privately held company in 1998, Wargaming has shipped more than 15 titles. Currently counting over 1000 employees, Wargaming is focused on its team-based MMO war series dedicated to the mid-20th century warfare that will include World of Tanks, World of Warplanes, and the naval World of Warships. The three titles will form a common gaming universe integrated within the portal www.wargaming.net.