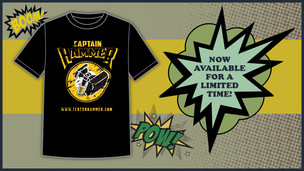 Ten Ton Hammer T-Shirts Now Available
You asked and we delivered. Support Ten Ton Hammer and get an awesome t-shirt in the process! These puppies are
Article
Miscellaneous Solo Content: A Disease? Or the Cure?
No gamer is an island...But do happy soloers make for happier MMO communities?
Review
Miscellaneous 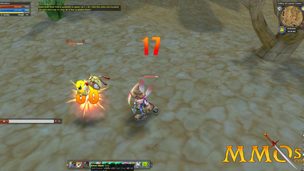 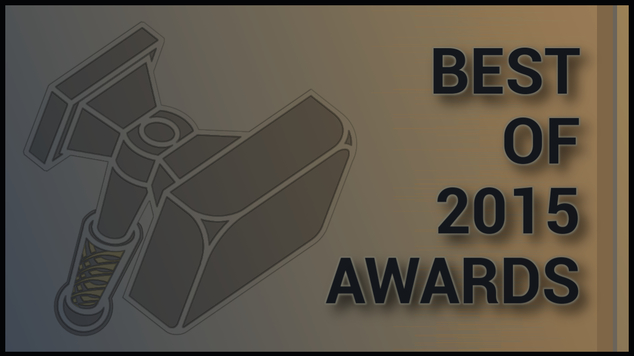 As we count down the final days remaining in 2015, the team at Ten Ton Hammer is pleased to present our Best of 2015 Awards. Our process for nominations and determining the winners in a given category has largely remained the same for the past 11 years. But as any core MMO gamer will tell you, the industry is also in a very different place than it was back when Ten Ton Hammer began its crusade to help spread good gaming to the masses back in 2004.

Physical releases for MMOs have all but come to a grinding hault in the age of digital distribution. Many developers have also turned to the Xbox One and PlayStation 4 as viable platforms for expanding audience reach beyond the core PC gamer. Even more studios are appealing directly to potential fans for financial support at a very early stage in development, further blurring the lines between what constitutes a release product from one that is still in an alpha or beta state.

Perhaps an even bigger trend in 2015 is the continued and very pronounced influence of MMOs found in other genres. Multiplayer modes, character (or account-wide) persistence, and advancement systems were all largely pioneered within the spectrum of MMORPGs that came before. And each has become a staple of modern shooters, not to mention the massive influence on open world survival sandbox gaming.

As we went about the process of determining which titles deserve inclusion in our Best of 2015 awards, one word helps to sum up the more granular criteria involved: impact. For a given title to truly be the best in a given category, it must have made a sizable enough impact not just within the confines of its own persistence, but also in the broader sense of the impact a given title has made upon video gaming as a whole.

So without further delay, we’re pleased to bring you Ten Ton Hammer’s Best of 2015 Awards! 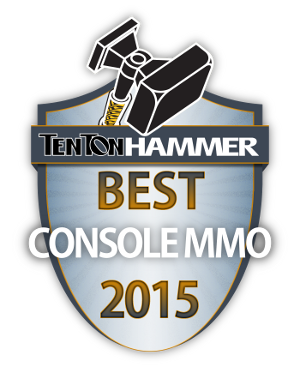 Built from the ground up with the fluid action of console gaming as a core point of inspiration, it's no wonder that Neverwinter has made such a smooth transition beyond purist PC-based MMO gaming.

In 2015 the market for worthy MMOs on home consoles has continued to expand, and it's thanks to titles like Neverwinter leading the charge that we can also continue looking forward to a bright future for console MMOs in 2016 and beyond. 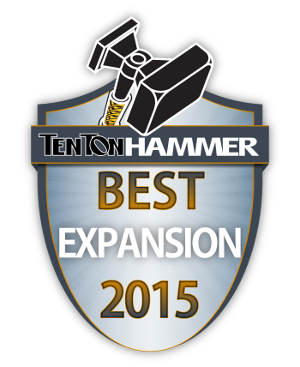 In the age of digital distribution, many developers and publishers have turned to smaller DLC packs and content updates in favor of proper expansions. The team at BioWare understand the importance and impact of releasing full expansions, and has crafted a narrative-driven masterpiece with Star Wars The Old Republic – Knights of the Fallen Empire.

Getting back to its storytelling roots, BioWare has shown the value in sticking to your strengths rather than attempting to be all things to everyone. While Knights of the Fallen Empire is certainly an accessible little slice of MMO greatness, its true value lies in the ways it remains true to the vision of SWTOR and what that means to its legions of fans.

Best MOBA - Heroes of the Storm 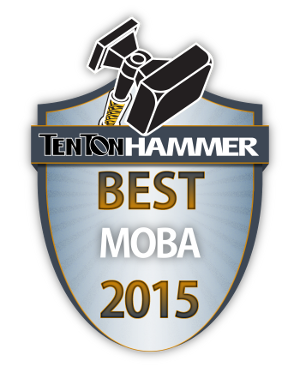 Now that the MOBA dust storm is beginning to settle a bit, it has become somewhat obvious that only a handful of titles within the genre contain that magical spark worthy of commanding gamers' attention. From the very beginning, Heroes of the Storm was destined to become one of the top MOBAs on the planet – a destiny it slipped into as comfortably as a well-fitting glove.

League of Legends has been the world’s most popular game for quite some time now, and with good reason. Specifically within the MOBA genre, Riot Games has done an incredible job blending accessibility and complexity, creating a game experience that can cater to both the most casual and hardcore of fans. The constant evolution of the game speaks highly to Riot’s commitment to the long-term success of League.

As an eSport, League of Legends has been, and continues to be, a trailblazer. The premiere “regular season” leagues are second to none in production quality, and are only out-matched by the World Championship each year. Over the course of the 73 games from this year’s Worlds, the average concurrent viewership was over 4.2 million. It may not have been the first MOBA (and on the flip side, also isn’t the newest), but League is continuing to pave the way for the genre. Heroes of the Storm is worthy of winning this award for 2015, but League of Legends undoubtedly deserves an honorable mention. 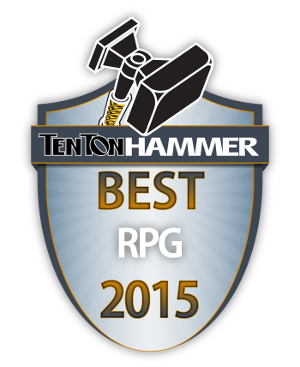 RPGs come in many different shapes and sizes, but at the end of the day each can be measured by its overall immersion and how much control players are given over their own destiny. A compelling story and a virtual world inhabited by rich, believable characters and situations also don’t hurt one bit.

The Witcher III: Wild Hunt delivers in each of these areas, and then some. It is a slice of RPG greatness that offers far more depth and compelling narrative moments than we’ve come to expect from the genre, and easily deserving of our Best RPG of 2015 award. 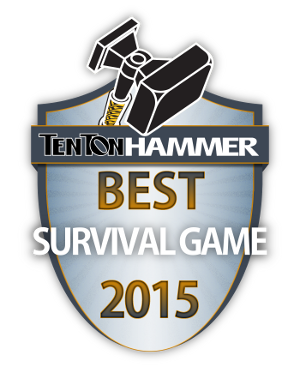 What began as a fresh new take on multiplayer shooter modes has solidified into its own distinctive genre with the rise of survival sandbox gaming. The direct influence from MMOs is readily apparent, though many development teams remain fixated on tethering the entire affair to a fictitious zombie apocalypse. Thankfully, some developers have begun the process of allowing the genre to evolve beyond its primordial zombie soup.

Ark: Survival Evolved is leading the charge in this regard, delivering not only a compelling new environment to explore within the survival sandbox genre, but also in the many ways it factors in multiplayer components beyond your typical open world bloodbath scenario. We expect to see big things from Ark moving forward, but in the here and now it is what we consider to be the Best Survival Sandbox Game of 2015. 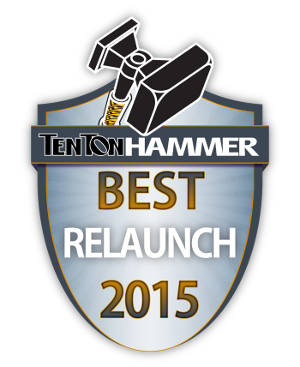 Over the years it has become part of the DNA of the Ten Ton Hammer staff to celebrate the many forms of evolution found within MMORPGs. This also applies to the handful of developers and publishers who boldly attempt to make the transition from a subscription service to either a hybrid or truly free-to-play business model. This is no easy feat to accomplish, and one that requires countless hours of planning and additional development time behind the scenes.

In that spirit, we are pleased to present our award for Best Relaunch of 2015 to WildStar. The teams at Carbine Studios and NCSOFT have delivered on their promise to leave no stone unturned in the transition to a hybrid free-to-play model, and the results speak for themselves. Accessible, immersive, and most of all fun, WildStar is a prime example of what it means to truly commit to making the best MMO possible while factoring in the most precious currency of all: player feedback. 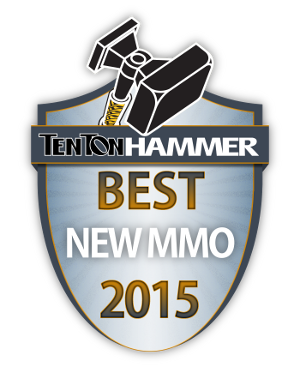 The MMO industry thrives when existing gameplay systems are blended with fresh, new concepts. While most developers are content to stick with tradition, relatively few attempt to blow the lid off our expectations of what an MMO is capable of being. Fewer still are determined to refine those new concepts to a sharpened point, primed and ready to deflate our understanding of what is possible within the genre.

Skyforge is not your typical, traditional MMO experience, and has managed to bring something truly unique to the table. Placing a far greater emphasis on character progression, your place in the world, and methods of making multiplayer the more promising prospect than your average MMO, Skyforge represents a bold new era for MMOs, while remaining true to the notion that content-driven experiences are still perfectly viable heading into 2016.

Game of the Year - Guild Wars 2 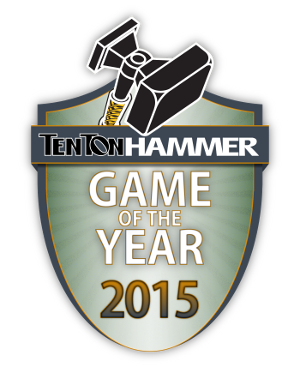 Game of the Year designates the title we consider to have been the most impactful in 2015. While this award traditionally goes to new releases within a given calendar year, MMOs are a unique genre in video games. Many titles can only be truly judged with the passage of time, and it is this evolution beyond the launch product that helps set MMOs apart.

In that spirit, the team at Ten Ton Hammer is pleased to present our Game of the Year Award to Guild Wars 2.

Developer ArenaNet hit the ground running immediately in January 2015 with the world reveal of the Heart of Thorns expansion, and didn't ease up the throttle until long after the expansion's eventual release this past October.

With the core game now free, and a first major expansion tucked neatly into its belt, Guild Wars 2 remains a dominant force in MMO gaming in 2015.

Congratulations to everyone at ArenaNet for a successful year - we're eager to see what 2016 holds in store for Guild Wars 2!