SWTOR Announces "Shadow of Revan" Expansion
<p>&nbsp;</p> <p>Latest expansion goes out with the old, in with the older.</p>
Interview
Star Wars: The Old Republic 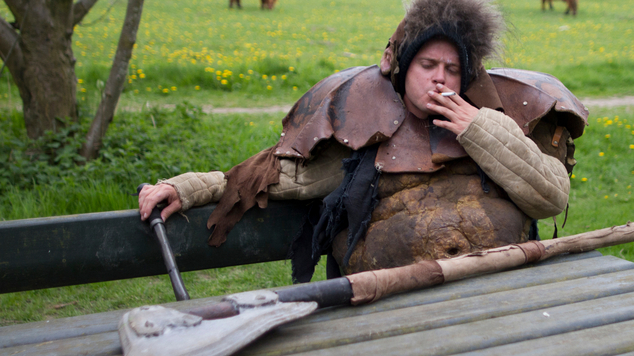 The first online game I ever played was BioWare's Neverwinter Nights, way back around the turn of the millennium. It remains to this day one of my all-time Top 5 video games ever made, and I have many fond memories of the vast amount of time I spent immersed in numerous characters on many diverse Roleplaying servers. In fact, I met one of my very best friends through good ol' NWN.

Anyway, back in those days, a lot of RPGs - essentially every game based on Dungeons & Dragons, but many others as well - used a somewhat antiquated system for determining a character's personality and ethical worldview: the Alignment system. Alignment was essentially a shortcut for figuring out how a given character would react to certain situations and their motivations for specific behaviors. The D&D alignment system used two axes - the Good vs. Evil axis and the Law vs. Chaos axis, with a Neutral position in the center.

Evil characters typically choose the easiest path, engage in selfish behavior and show little empathy for others, while Good characters are more altruistic and caring. Lawful characters adhere to societal codes and prefer order, Chaotic characters tend to follow their own code of personal ethics and prefer freedom. Both of these axes had a Neutral option as well - a character who was Neutral along the Good/Evil axis was either a flip-flopper who would alternate between good and bad, or had no concern about morality; and a character who was Neutral along the Law/Chaos axis was someone who either followed the laws as they suited him, or who had no regard for the whole responsibility-versus-freedom thing. 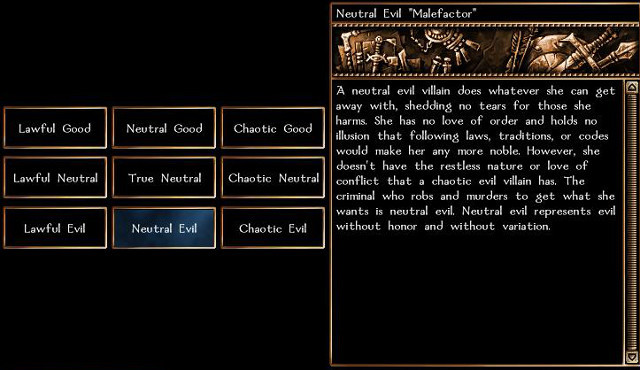 D&D's alignment system is far from the only such system. Any tabletop roleplaying game worth its salt has something similar, from the painfully-detailed system in Palladium games to the more open-ended system of "Nature" and "Demeanor" in White Wolf games. But, owing to the massive volume of D&D-based video games, the 9-point D&D alignment star is likely the most familiar of them.

Ideally, this system was used as a rough guideline for the purposes of roleplaying a character. The player would encounter a situation and formulate his reaction to it based on his alignment, his Intelligence score and a number of other factors. Alignment was never intended to be the be-all-end-all of a character's decision-making process - for example, a Lawful Good Paladin would realize that going full-psycho on a merchant he knew to be Evil, just because the merchant had an Evil aura, would be a bad thing, even if it was sanctioned by the Temple and the local lords. It would be a perfectly lawful act, and eliminating Evil is the mandate of Good, but one does not simply go around beheading people without demonstrable cause because doing such things can cause civil unrest. 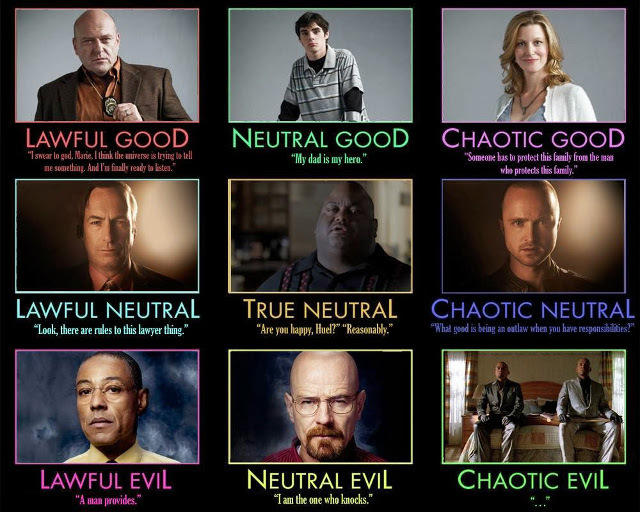 Unfortunately, that's more or less exactly what happened with Alignment in Neverwinter Nights. It became an excuse for people to see what they could get away with, without catching hell from GMs and other players. Paladins went around boldly committing cold-blooded murder, simply because they were Paladins and the other guy was rolling a Lawful Evil Sorcerer. Evil characters got up to all manner of shenanigans that defied all logical sense, based solely on the fact that they were Evil.

This is unfortunate, because Evil characters are arguably the most interesting when they are done right. Good guys have no depth - they don't need a reason for what they do, they fight for Right and Justice and blah blah blah. That's kind of boring. It's far more interesting to follow the chain of events and train of thought that creates a villain - that's why Breaking Bad was one of the best TV shows ever made, because that exact journey was shown in excruciating, horrifying detail.

Ironically, it's also why so many fans were so disappointed when essentially the same thing happened to Darth Vader in the Star Wars prequels. Not because that journey wasn't also interesting, but because Anakin Skywalker's transition from Neutral Good to Lawful Evil was slapdash and hokey.

One of my all-time favorite roleplaying characters was an evil Blackguard of Hextor, born on a roleplaying server in Neverwinter Nights. He was a citizen of a city defined by its worship of the six-armed God of Tyranny, which stood opposed to another city where the state religion centered around Heironeous, the God of Valor. There was a natural rivalry between these two cities, and my character fancied himself something of a front-line "diplomat" - training soldiers to fight in the holy war, desecrating temples, harrassing the enemy at every chance, kidnapping and ransoming babies, staging violent ambushes, sowing the seeds of insurrection and generally being a rotten sonofabitch. I didn't always attack every good-aligned character I saw, but I will admit that I probably took the whole Evil thing a bit too far on occasion, to the point where the character had no grasp of logic and no sense of self-preservation. 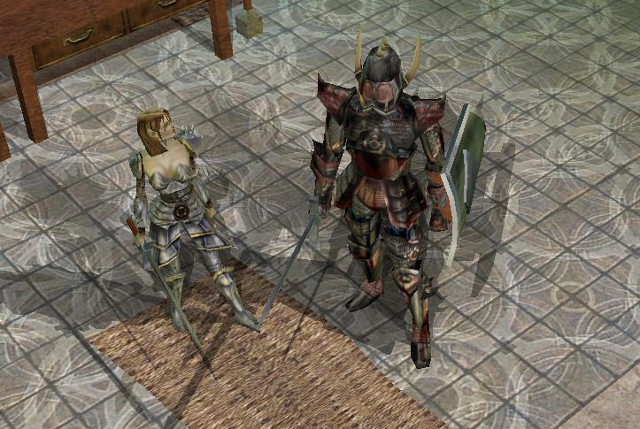 And the character did strut around in his custom-designed black-and-red spiky armor, which is another kind of evil trope that doesn't make a lot of sense. Imagine your favorite real-life evil dictator, prior to his appointment to his office of power, had gone around with black and red spiky clothing and glowing red eyes, declaring all the horrible evil shit he intended to do once he got into office and chortling madly. Even if his platform was all about jobs, food and shelter for everyone always, economic prosperity and world peace, with practical ways to achieve all of these things within a year, the voters would be thinking, "Well, I like his ideas about jobs and stuff, but he kept saying how he was going to torture Welsh babies and then burn them all alive, and he kind of looks like a partially-mummified corpse with glowing red eyes. I think I'll vote conservative this time around."

But, in the fantasy genre, that's kind of the status quo for evil villains. Spikes, chains, Gothy colors, skulls and bones everywhere, megalomaniacal declarations followed by psychotic laughter. It should be easy for fantasy-world law enforcement to contain these psychopaths before they grow to dangerous power - as soon as a guy starts wearing black and red with spikes, you throw him in jail. But they never do, and soon enough the castles are besieged by armies of skeletons and demons. Because the guy was Chaotic Evil. 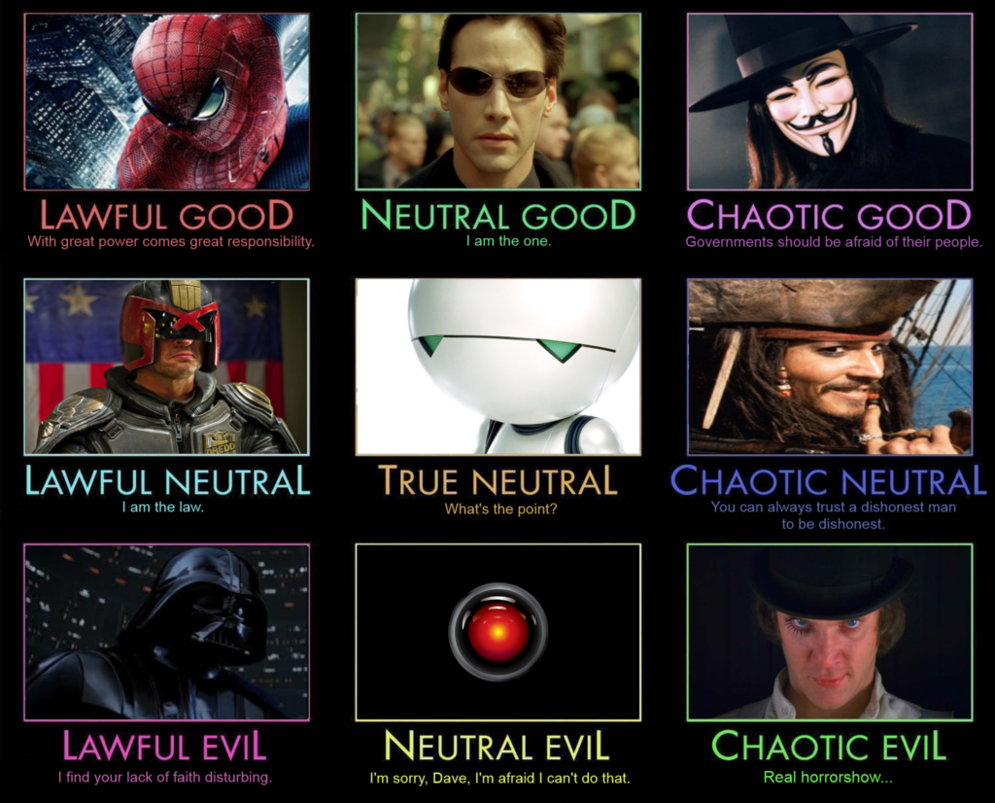 Perhaps the very worst offenders were Chaotic Neutrals. There are lots of reasons to play Chaotic Neutral - it's a free-wheeling, anything-goes sort of alignment, focused primarily on individual freedom. Think Captain Jack Sparrow - not really evil, not really good, but all about living without any rules.

It's too bad we didn't have Captain Jack Sparrow as a role-model back then. Chaotic Neutral was the favored alignment of trolls and jerkwads, and became the sole reason any of them did anything annoying.

"I'm a Chaotic Neutral Drow. It's perfectly within my character to have murdered your character for no reason - I felt like doing it!"

For this reason, certain alignments were banned or restricted on many Roleplaying servers in Neverwinter Nights. Even when these restrictions made practically no sense. I recall one server in particular that banned Chaotic Neutral and any Evil alignment for new characters, yet they allowed new players to create Tiefling characters. By the ruleset they were using for that server, Tieflings had a requirement to be either Chaotic or Evil (because they are descendents of demons, which are Chaotic Evil by nature). Since Evil was disallowed across the board, that left Chaotic as the only choice. But Chaotic Neutral was also banned, so that left only one alignment: Chaotic Good. All new Tiefling characters on that server had to start out as Chaotic Good - basically, Robin Hood types. 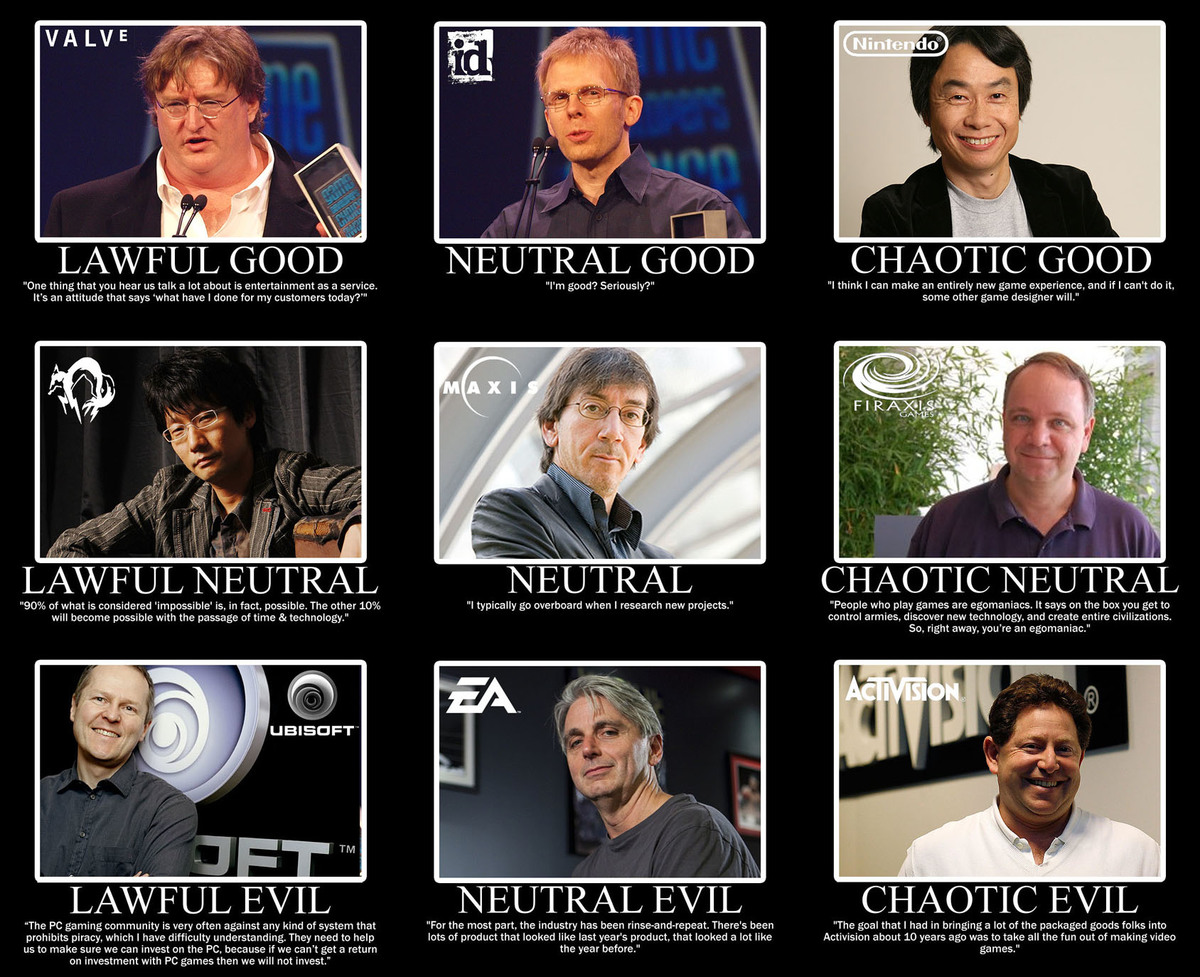 Thankfully, this broken crutch has mostly gone the way of the dinosaur. Alignment is essentially gone now, replaced by the much simpler idea of factions. The teams are united by similar ideologies - Team A believes in its own divine right to rule, Team B believes that freedom is the ultimate goal, Team C believes that only the strong survive. Each team has its own share of Good and Evil, Law and Chaos, usually in more or less equal measure. Modern MMORPGs tend to shy away from the "black and white" nature of alignments because - let's face it - actual roleplaying is no longer an important aspect of most roleplaying games. And even when it is, too many dummies do it wrong.

Of the current crop of top-level MMORPGs, I know of only two that still use actual Alignment. 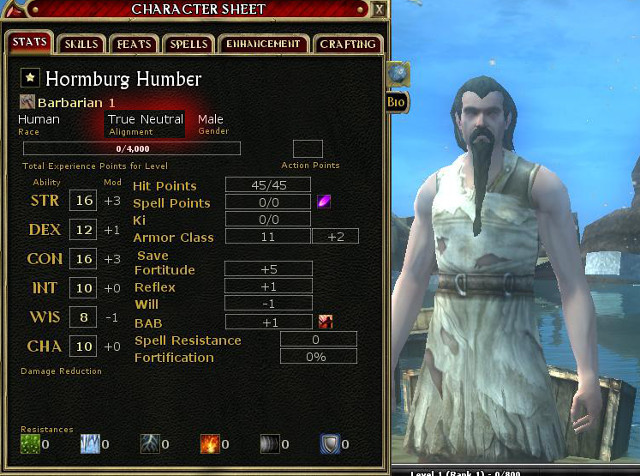 Dungeons & Dragons Online still uses it, because they are still using modified 3.5 Edition rules. Neverwinter, the "other D&D game," has dropped alignment altogether, as 4th Edition rules no longer really enforce strict alignments on characters. You can be an evil Paladin in 4th Edition. Ugh.

There's one conspicuous absence in DDO's alignment spectrum, however. The DDO team firmly believes that players should be playing heroes and not villains, so there are no Evil alignments.

However, since practically nobody ever roleplays in MMORPGs - except for a handful of people on a very few select servers - the Alignment system in DDO is essentially a non-issue. You still gotta be Lawful Good to roll a Paladin and Barbarians cannot be Lawful, but that's pretty much as far as it goes. 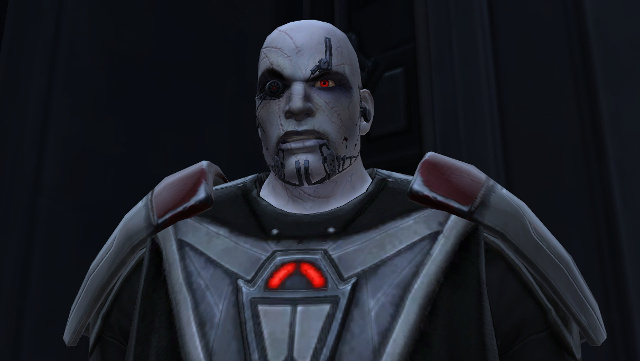 The other major MMO that still uses Alignment is Star Wars: the Old Republic. The Star Wars alignment system is a lot simpler, though - it uses Light Side / Dark Side instead of Good / Evil, and essentially drops the Law / Chaos aspect. Characters can make Light or Dark decisions, and occasionally feel the impact of these decisions later on - a NPC whose life you spared may offer help later during a crucial fight, but if you opted to murder that character, you're on your own.

And if you choose enough Dark Side options, you get all corpse-y and red-eyed, just like every Chaotic Evil D&D character ever.

What's your take on character alignment? Miss it? Hate it? Let us know in our comments!

SWTOR Announces "Shadow of Revan" Expansion
<p>&nbsp;</p> <p>Latest expansion goes out with the old, in with the older.</p>