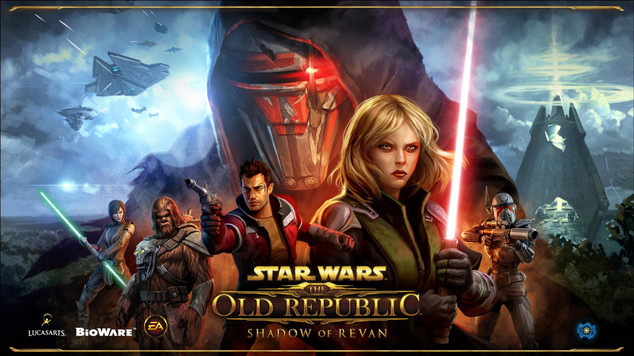 Hands-On with SWTOR: Shadow of Revan
We dive into SWTOR's newest expansion for some hardcore space-pirate action.

Yarr, mateys! Star Wars: the Old Republic launched the Shadow of Revan expansion on her maiden voyage on Tuesday. This is the Early Access launch - in order to take part, you will need to have pre-ordered the expansion prior to November 2. Luckily, I did that, so Ogregunk the Sith Juggernaut gets to go a-pirating. 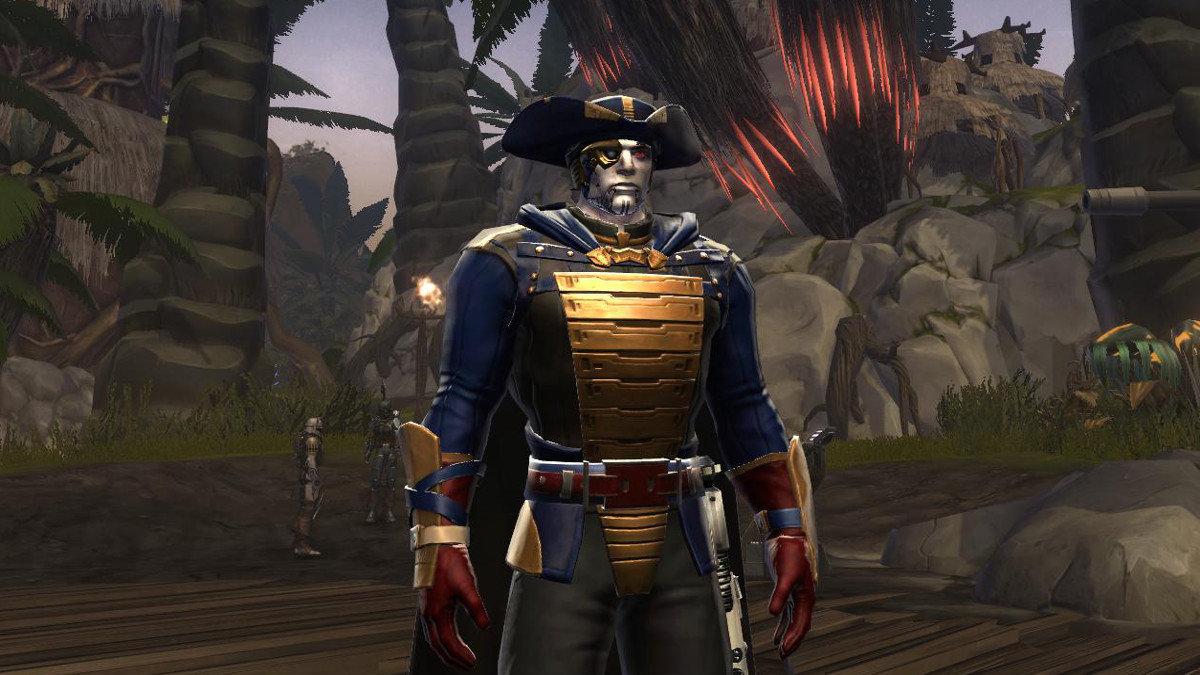 First things first, and this applies to everybody: BioWare has completely revamped the classes. No more skill trees where you can mix-and-match and create clever hybrid builds. Now, you pick a role and you stay there, dammit. Each class has three Disciplines, each bearing the same name as the old corresponding skill tree, and perks are automatically added as the character levels up. Additionally, every ten levels or so, the character gains a Utility Point, which is used to buy Utility perks. This is all the build-customization your character gets from now on.

I'm not terribly happy about this arrangement, but in all fairness I don't really notice any difference in how the Juggernaut plays. I've always gone full Immortal with him with a few points scattered in the other trees for extra Endurance or ever-so-slightly-more lightsaber damage. Ogregunk feels pretty much the same as the last time I played him. 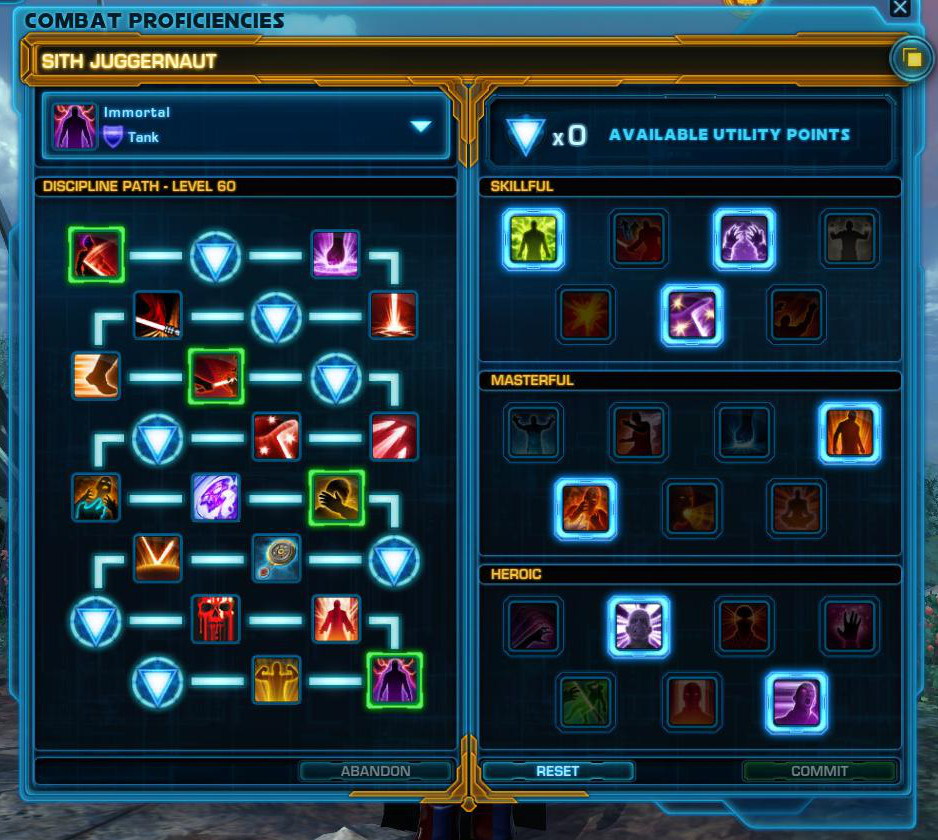 This won't be true for my Sorcerer, who used a hybrid damage/healing solo build. I'll have to relearn that class from the ground up, and that's going to be annoying.

The second most obvious change that's going to apparently affect most everybody is the rearrangement of the buff and debuff bars. I run with a customized UI and have been using the same setup ever since they added the UI customizer. Formerly, the buff and debuff bars were attached to the character's health bar. Now, they are separate elements, and they are moved to the default position. Which will be inconvenient for anyone using custom toolbar layouts. If you can't see your row of buff icons, open up the Interface Editor, look for the Player Buff Tray and Player Debuff Tray and move them wherever you want. Ideally, not behind the toolbars, which is probably where they are now. 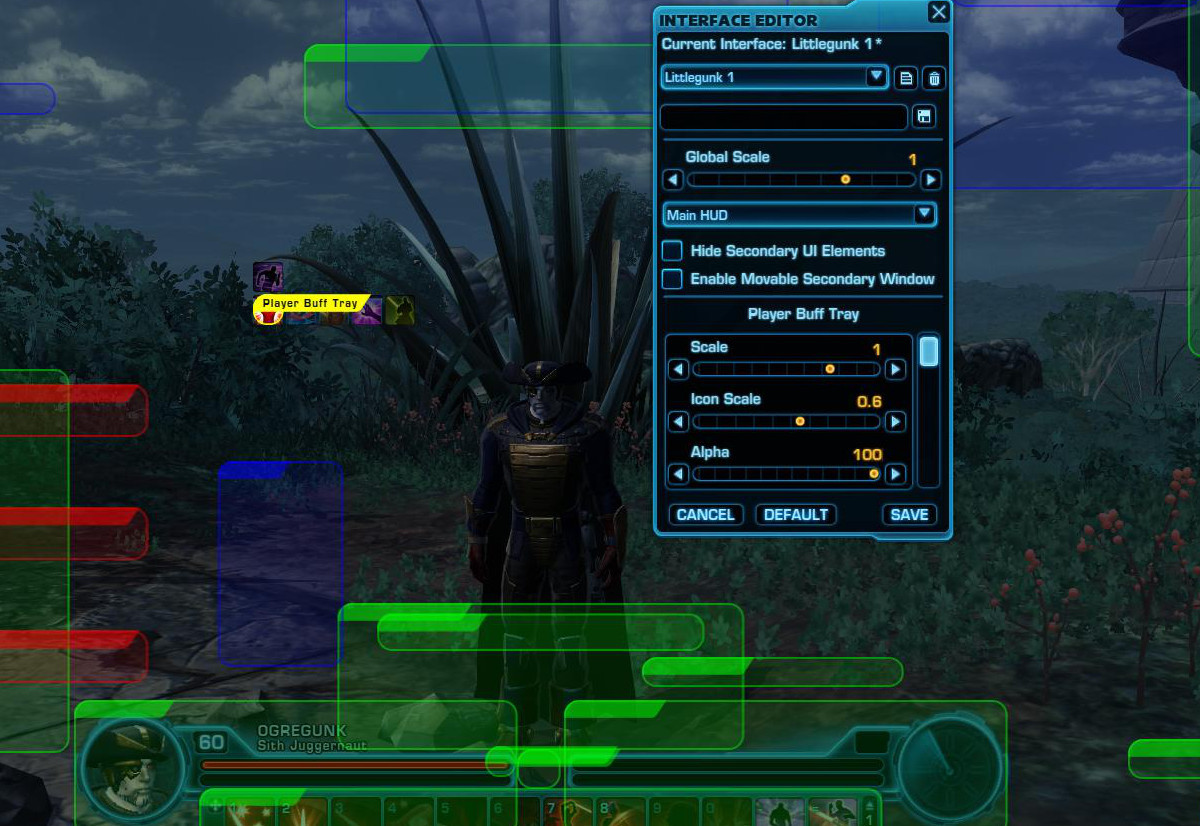 The new content starts at a new terminal aboard the player's ship, but I found that there was some slightly misleading information presented in the mission text. If you haven't done the Forged Alliances content (which I had not), the Shadow of Revan: Prelude mission text seems to suggest that you should go do that first before playing through the new stuff, because there are plot spoilers.

What it doesn't tell you is that the "Prelude" mission is actually the entire Forged Alliances storyline, with all the Flashpoints turned into solo missions. So if you have any Forged Alliance quests active in your log - the tactical Flashpoints - apparently you can either play through them the old-fashioned hard way with a group, or you can cancel them and run all of that content solo in the Shadow of Revan prelude.

When you run the Flashpoints solo, you are aided by a GSI Combat Support Droid.

Hot damn, is the Combat Support Droid awesome. I want one for a pet - I will hug him and pet him and feed him and call him George. The little fellow tears through mobs like a hot knife through a bunch of other hot knives. It's pretty much EZ Mode for the sake of story progression.

You'll get a set of half-decent gear from these Flashpoints, similar stats-wise to the Oricon set but using green mods instead of purples. I ended up throwing most of those on Broonmark.

When I finally got into the new Shadow of Revan content, though, I was no longer so in love with my Oricon-plus loadout. And I discovered that I had a gigantic amount of Basic Commendations, since many of the previous types of Commendations (e.g. Planetary Commendations) got converted over. So when I got to Rishi, I swapped out every purple mod I had for blue 172-rating mods. And while I was at it, I gave Treek a full mods upgrade as well. I could probably have outfitted all my companions, but since I only use Treek for anything these days, I figured it might be wise to bank a few for those new speed-leveled alts in need of serious gearing. 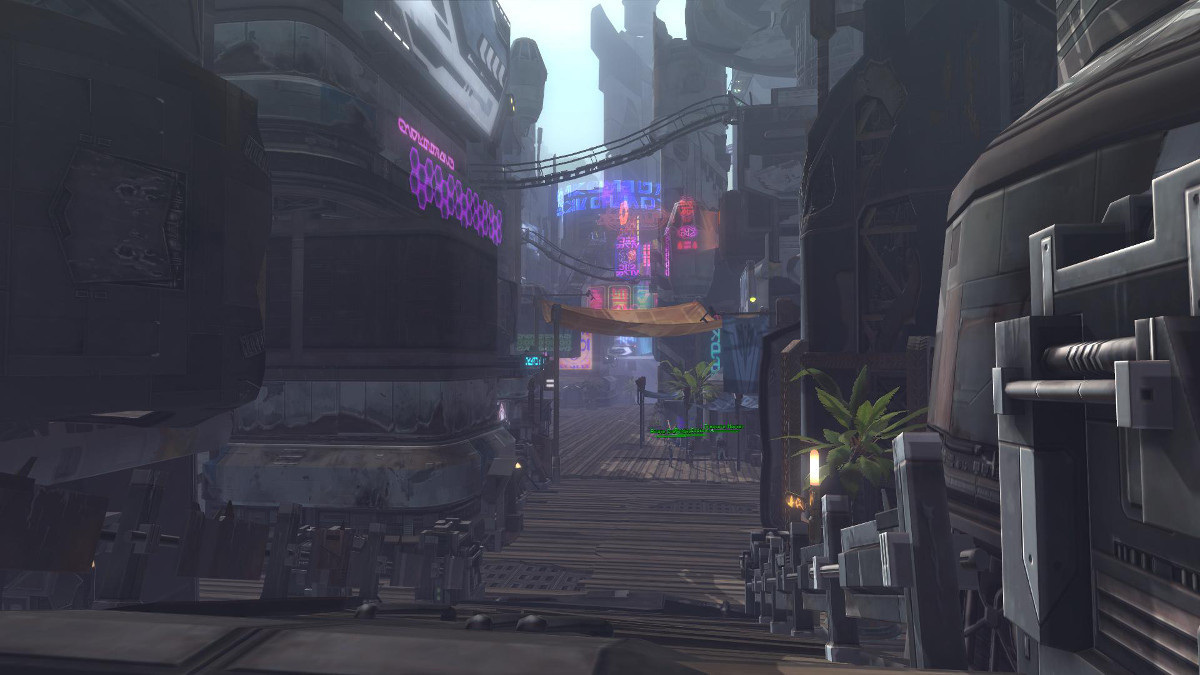 Rishi is a pretty cool guy. Eh totally rips off Tortuga from Pirates of the Caribbean and doesn't afraid of anything.

Seriously, though, Pirate's Cove is like Tortuga crossed with every movie-version of "Chinatown" ever. It's a lawless, ramshackle pirate city built in a lagoon bordering a swamp. The parrot-people natives are... interesting. At least, I think they're supposed to be based on parrots. The other option is intelligent talking Polynesian Owlbears. 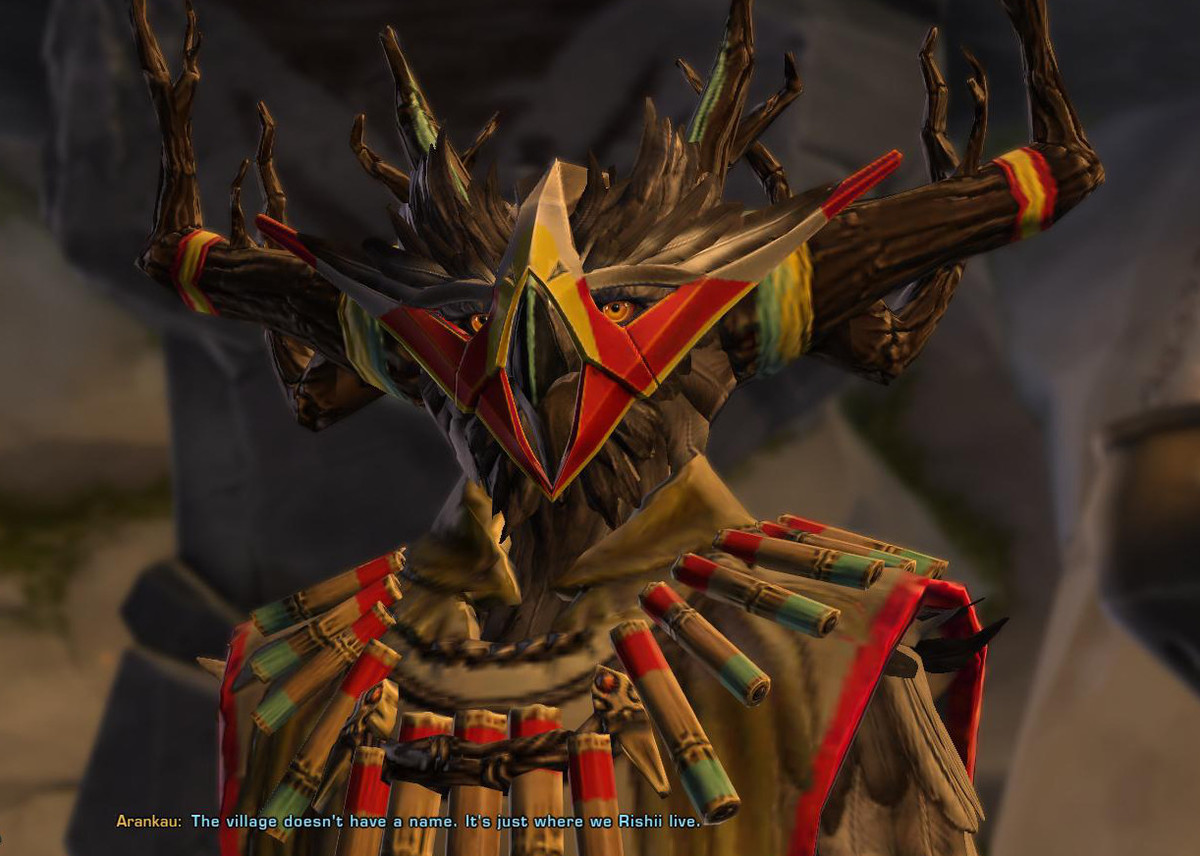 I ran into two spots of difficulty on Rishi. The first was a mission involving "Crier Droids," which requires you to find a way to stop one and interrogate it. This was one of the two most-discussed problems in General chat. The solution is, find one walking near one of the street lamps, and click on the streetlamp to electrocute it. It will stop walking and you can initiate the cutscene dialogue.

The other most-encountered problem is evidently a bug, perhaps caused by very heavy traffic. The mission "Jungle's Bounty" requires the character to hang bait on a small tree on a little island. In most map instances, this tree was broken and could not be clicked on. In a few of them, it worked fine, but high populations make this quest difficult to complete unless you happen to luck out and join a map instance with a working tree. When I was attempting this mission, there were about 16 map instances running, most of them listed in red, and of those 16 only 3 or 4 of them had working trees. The rest had a bunch of confused people queueing up around the map indicator waiting for something that wasn't going to happen. This, and another fairly significant issue I will address in a moment, are scheduled for repair with the patch update coming next week, according to a forum post by Community Production Coordinator Tait Watson.

I gotta say, the new pirate-themed cosmetics look pretty good. I may end up using them on my Bounty Hunter. But I'm not too keen on my tyrannical Sith overlord running around in a tricorne hat. 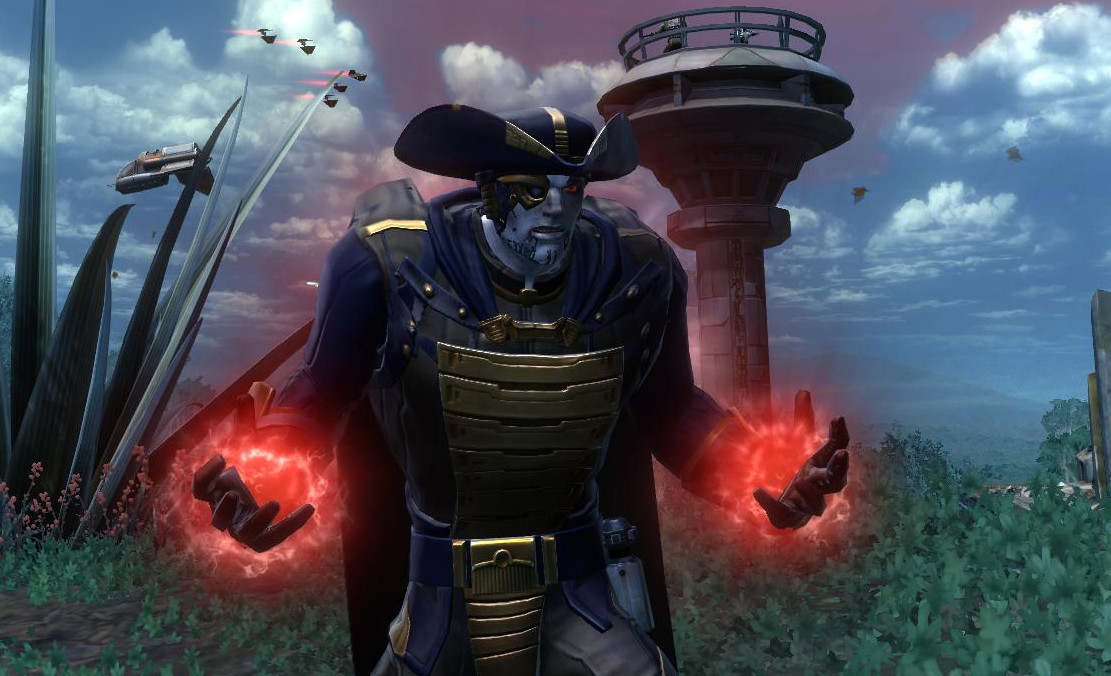 "YAAARR, MATEY! PEACE BE A LIE, THAR BE ONLY PASSION!"

The story continues on Yavin 4. Your first taste of this jungle moon will probably give you a little thrill of recognition: a guy in a weird little tower watching ships fly over the dense forest and ancient flat-top pyramid temples.

I don't want to spoil the story, but it should be pretty obvious that Revan plays a significant role in it, and a lot of the pre-launch press has hinted that the Empire and Republic will have to work together to defeat him. This is an uneasy truce, and I took great delight in taking cheap shots at Bastilla Shan and the Jedi Order during the cut scenes. 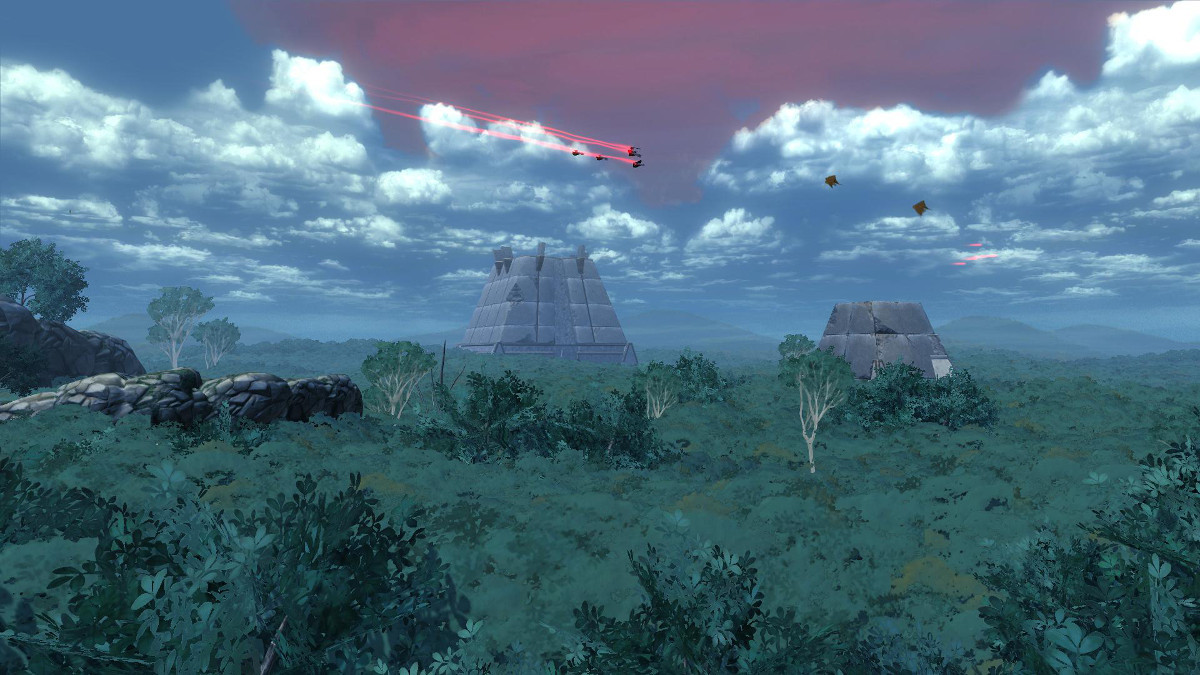 The final fight against Revan - again, not trying to spoil the story, but the expansion is named after him so it should be fairly obvious that there's a big showdown at the end - can be completed two different ways. You can elect to run it as an Operation or Solo. I chose Solo because that's how I roll.

The solo option requires completing a number of missions for various NPCs around the "coalition" landing zone, and then taking on Revan with all the allies you have made along the way. The final solo fight involves a lot of scripted NPC behavior, which of course means plenty of opportunity for glitching out. One guildmate suggested that when I do the fight, I should avoid breaking any CC so Revan doesn't glitch. I intentionally avoided any CC-breaks, but he still ended up choking me to death instead of summoning in the orbs or whatever. Evidently, this happens to a lot of people.

I am content to wait for the next patch before attempting that fight again, but a lot of people are angry about it, accusing BioWare of selling early access to a beta product. They did closed beta testing for this expansion, so the testing of this fight couldn't have been super-detailed or thorough, but even still I'm not particularly upset about that. I have yet to see a game release a major content update or expansion that is 100% on launch day. It's unfortunate that this particular bug happens right at the climax of the outstanding story, but it'll get fixed by a patch, and because of that 12x XP on Class Missions event, I have a dozen or so alts that I can run through the rest of the expansion and the solo-fied Flashpoints. 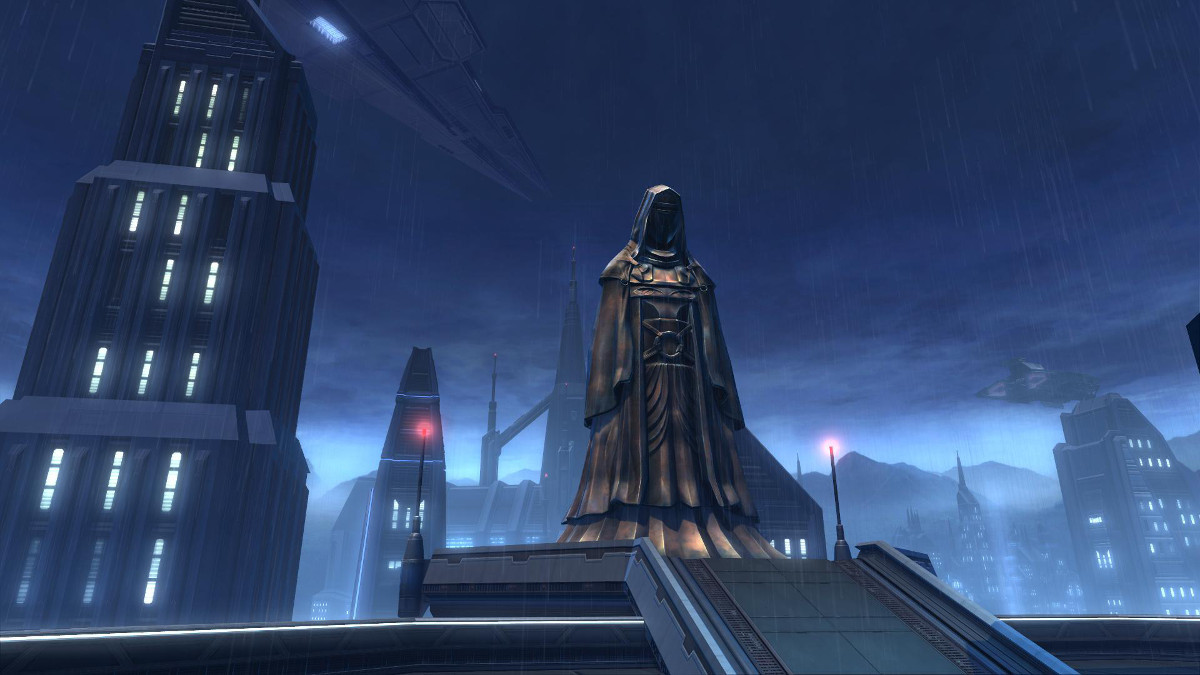 Once again, though, I found myself woefully unprepared financially. The month of free skill training is over, and the set of upgrades at level 60 runs about 500,000 credits or so. I had to run a set of dailies to earn training money, and that was with my wealthiest character. All the alts have been kicking upstairs to the main dude. And he went and blew all that money on unlocking the balcony of the Dromund Kaas house so he could have a place to display his new giant Revan statue.

Apparently, though, that is soon to be a thing of the past. According to a forum post by Community Manager Eric Musco, the dev team is permanently removing training costs from the game sometime next week. Kinda doesn't help me now when I'm broke, but if it can save my future characters literally hundreds of thousands of credits, I'm on board.

Overall, this expansion feels a lot more substantial than Rise of the Hutt Cartel, despite the fact that I was able to blow through it faster. It just feels more "Star Wars-y" somehow. And when they issue the patch that mends the early-launch flaws, it will be even moreso.

How has your Shadow of Revan experience been so far? Let us know in the comments!