Why the Relationship Between Publishers and Developers Must Change
<p>Developers and publishers as well all know have different views on how a game needs to be made.
Feature

PvP A Comparison of Old School vs Next Generation MMOGs
<p>Perhaps it's a sign of my age, but I find that the more MMOGs I play, the more I long for the good old days
Editorial 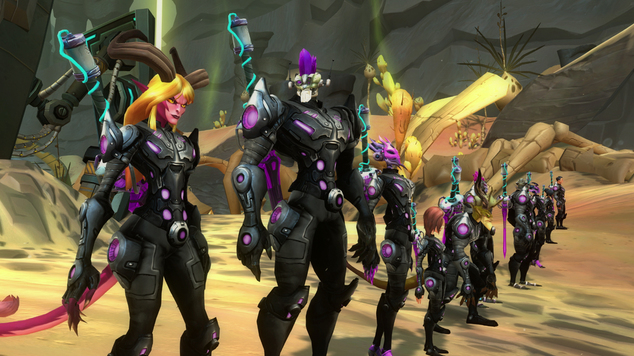 Questing For Evolutionary Changes
<p>If I earned $1 for every time I hear people complain about typical MMOG quests (kill this, collect that, def

If I earned $1 for every time I hear people complain about typical MMOG quests (kill this, collect that, defend here) I would probably be a very rich man. Why though, do we complain about such quests when the majority of them are pretty good?

Guild Wars 2 is one of the few MMOG in the past ten years that has sought to change the concept of questing and yet for all its promise, all it really did was remove an NPC and replace it with a golden heart. This was hardly the revolution claimed as I was still collecting apples or killing bandits to make said heart fill up: all ArenaNet really did was shift the goalposts ever so slightly to disguise the fact we were still doing exactly as we've always done. I must stress, though, I don't have any problem with the system ArenaNet devised or that of the traditional system we're used to seeing in World of Warcraft. Quite the contrary.

My issue with said quest system has always been the fact that it felt too narrow and too “small”. Go here and kill this or fetch that tended to lack imagination rather than the fundamentals of what you were doing not being fun. Killing ten rats isn't particularly exciting but killing ten giant killer robots is. I'm not suggesting that quests such as collecting apples shouldn't exist (because I feel they absolutely should) but developers need to recognize that context and scale are incredibly important here.

As the “hero” our actions need to reflect the grandeur with which we are being built up by the NPC's we encounter, but sadly they often don't and I feel that tends to be why such questing feels menial. Considering these quests are also handed out by dead-eyed NPC's with poor, uninteresting stories, there's little wonder why we don't want to collect their bloody apples.

Carbine with WildStar have actually done a really good job of improving on the standard questing system, by making evolutionary rather than revolutionary changes to the basics of what you do. Rather than having to return to every NPC you complete a quest from, they'll call you to congratulate you on your success once you've finished it. Removing the need to yo-yo back and forth between objective and quest giver makes life a joy. Better yet, although kill and gathering quests exist, they can be completed relatively quickly if you source particularly challenging variants on the NPC's you're hunting or where collect quests are concerned, they actually make it fun. Rather than simply collecting 10 crystals (as one example), you'll be given a power-up to soar through the air or jump 100 ft high. It might sound minor, but when asked by an NPC if you can collect fireflies above a waterfall in under 30 seconds, it's a lot more engaging rather than simply asking me to collect them in a field.

I'd still prefer the scope and scale of quests to be bigger than the likes of WildStar at an encounter and enemy level, but what Carbine have done is polished off the rough edges from an existing and working blueprint. Admittedly part of the wider problem here is the inclusion of levels in the massively multiplayer genre and the fact that without them, it would probably be a lot more advanced than where we are now. However, for now I'm willing to accept these minor increments as I still enjoy the core game-play.

If we haven't yet reached the point where levels can be removed completely in commercial MMOG's (EQNext seems to want to change that) and people still object to this traditional structure, I've yet to read a suggestion from anyone that offers a good alternative. The best solution I can find is doing exactly as Carbine have done and that's building upon what we already have with engaging NPC's, funny dialogue, fun quests and enemies you fight being larger than a rodent. We've already improved the combat in the genre massively from the likes of World of Warcraft, which goes to make questing much more enjoyable (though I'd still like to see more people follow Age of Conan's system) people just need to wrap their head around the fact it's not the fundamentals of what we're doing that's boring, it's how it's delivered.

What are your thoughts on questing in the genre? Is it beyond fixing or do you agree that it just needs a little more evolution to bring it from the dreary to the engaging?

Why the Relationship Between Publishers and Developers Must Change
<p>Developers and publishers as well all know have different views on how a game needs to be made.