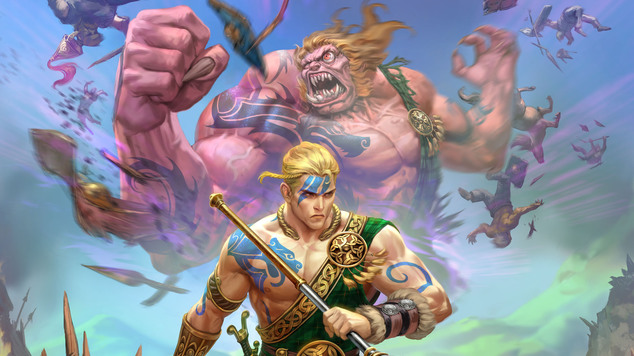 SMITE: Best 5 Solo Laners
In this article we pull together a list of the best five solo laners in SMITE.

Our ever popular SMITE Tier List ranks each God in a Tier that we consider to be "the best",  its detail is intentionally limited: we want you to be able to quickly view the list and see where Gods are placed. When creating this list, we took into consideration key attributes a strong solo laner needs:

This article will, upon every change to our Tier List, reflect the best 5 solo laners in Conquest.

I can’t remember a time where Bellona wasn’t amazing and it’s all down to her kit providing so much of, well, everything. Her Passive grants her movement speed and protection when she’s taking damage (making her a nightmare in 1 on 1’s) while her remaining skills offer bags of utility and damage. Shield Bash provides further mitigation against basic attacks, and her Ultimate - Eagle’s Rally - bolsters this further with protections and AOE impact damage. Bludgeon affords her high AOE pressure and some spike potential (especially its overhand attack) while Scourge provides a powerful disarm alongside ranged poke. This flexibility in her kit allows her to fit into most team compositions and if she’s effectively rotating across all her weapon sets, there are few situations she can’t adapt to.

Without doubt my favorite SMITE God, Cu Chulainn is not only incredible fun, but an undeniably potent solo laner. His kit is very strong, and allows him to clear waves easily but also bully his lane opponent with relative ease. His Rage acquisition, through his Passive, ensures he's a dangerous God to deal with. A well timed stun through Barbed Spear (Ground Slam), or dive with Salmon's Leap (Furious Charge) can ensure anyone he's facing takes significant damage, even before he unlocks his Ultimate ability.

Although Guan Yu has repeatedly risen and fallen in the SMITE meta, he’s always been one of my favorite solo laners. Not only does he look awesome, but he’s a great deal of fun to play. His hybrid playstyle of damage and self healing make him particularly hardy, and he can comfortably sustain himself through prolonged fights. His Passive, Painless, eventually doubles his healing from Conviction once he has attacked or been harmed 20 times. As far as Conviction is concerned, its base healing is reasonable and considering it also heals allies, provides solid sustain. Better still, it reduces your cooldowns by 2 seconds when you heal friendly Gods and at a base cooldown of 12 seconds, it’s not long until it’s ready again.

His three remaining skills all provide a dose of utility, mobility and reasonable damage output. Warrior’s Will provides such much needed mobility while lowering your cooldowns by a further 2 seconds. Taolu Assault offers further mitigation in the form of protections and knockback immunity and finally Cavalry Charge a guaranteed escape (should you need it) or an invaluable means of engagement, that allows you to deal high damage while delivering a stun on dismount. Overall, Guan Yu has a kit that provides him easy access in and out of fights and sustain once he’s committed.

Osiris has been in and out of favor many times over the last few years. His kit has always had potency, but a combination of new Gods, or tweaks to his kits, saw him fall down the pecking order. I'm pleased to say that as a solo laner, he's back amongst the best and Season 5 should see him rise to the top. His ability to become immaterial through his Passive, Fragmentated, ensures he can trade with confidence. His kit also has a great deal of utility through the use of slows, and movement speed increases. This, used in conjuction with Judgement Tether allows him to go toe to toe with the likes of Bellona or Chu Chulainn. While he might not always come out on top, he can often escape with ease.

For his Passive alone Tyr is an incredibly strong Warrior. Having most common crowd controls limited to 1 second duration buys him considerable time to withstand punishment. Better yet, his stance changing between Assault and Guard also refreshes the cooldown on Fearless and Power Cleave, as well as their effect. The fact Fearless and Power Cleave have a 15 and 8 second second cooldown sounds lengthy but when you can reset both just by stance swapping (which itself has a 10 second cooldown) allows you to regularly have both through careful cooldown management. As a result of the dual effects of both skills, Tyr effectively has six skills instead of 4. For example, in Assault Stance Fearless allows Tyr to charge forwards while immune to knockup, pushing enemies along with him before knocking them up in the air. In Guard Stance he will pass through enemies instead. Understanding which stance is best for the situation is key to Tyr’s playstyle while chaining your stances together makes an immeasurable difference. Finally and to round off Tyr’s kit, his Ultimate ability - Lawbringer - is a leap that deals huge AOE damage while slowing enemies caught in it. It’s also good for escaping if Fearless is on cooldown.