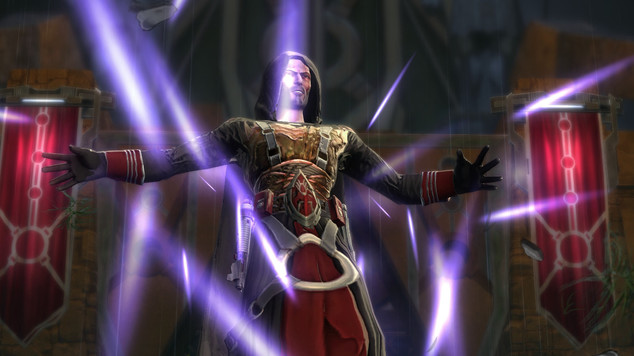 SWTOR Shadow of Revan - Post Patch Consumption
Now that the major bugs are patched, SWTOR's latest expansion is a lot of fun, even if it's not terribly challe

I've spent the week running Star Wars: the Old Republic's new Shadow of Revan content multiple times. So far, I've put 5 characters through Rishi and Yavin 4 - one of each Imperial base class, plus a Republic Jedi Consular. Now that I'm basically bored with the same exact story over and over, I've been noticing some of the little details and such that have gone into the expansion.

For me, the first and most obvious detail was the obvious nod to Disney. The new cosmetics really tell the story of the big IP shuffle from earlier in the year - you take one of those Rishi-reward Jack Sparrow toppers, pop it on any character and this is what you see from behind: 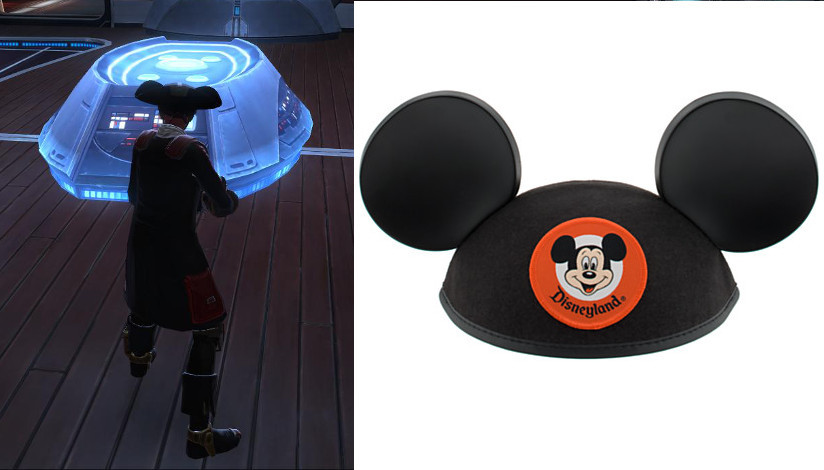 Another little tidbit I found was a random conversation between two pirates in the tavern in Tortuga Pirate's Cove, arguing whether Hoth or Taris is worse. This discussion takes place roughly a hundred times per day in General chat on those two planets. Add in Tatooine and you have the Worst Planet Trifecta.

There are other fun touches, too, like the back alley Rock'em-Sock'em Robots fight. 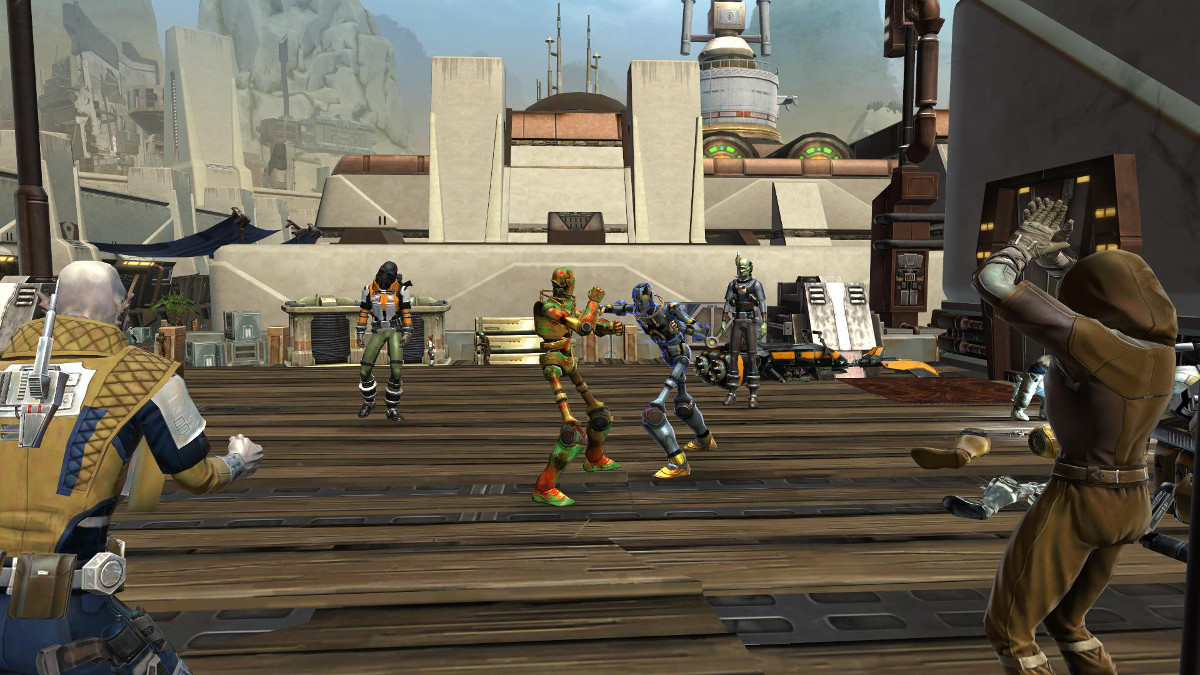 Because of the super-abundance of top-grade crafting mats on Yavin 4, and my overwhelming compulsion to loot and pillage everything I see on my screen, I now have a massive surplus of Grade 11 mats stuck in my Legacy storage vault. I actually had to buy a third page just for complete stacks of overflow. That may sound awesome, but it's not really. The market is absolutely flooded and materials are selling for slightly less than vendor value, and there's still not much worth crafting in most professions. My Biochem guy is a stim and meds factory, but he's really the only one making anything useful at the moment. The other guys are making basic green junk and recycling them for the Augment parts. 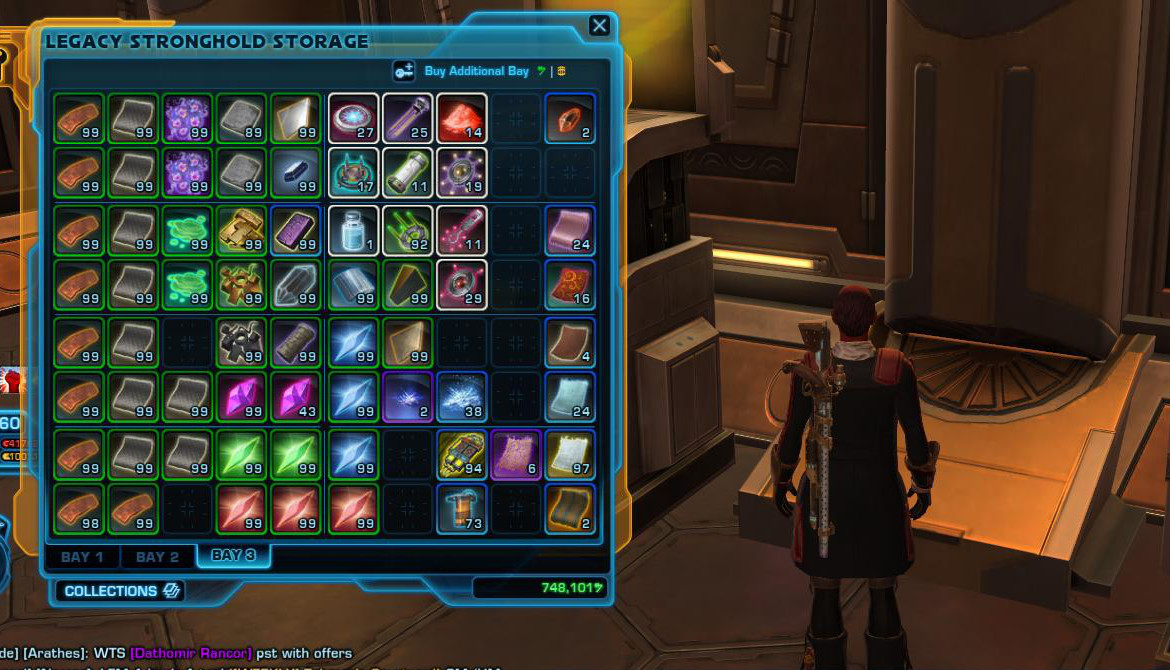 I really notice a difference between the older, more seasoned characters and the speed-leveled noob characters. When I rolled my Juggernaut through the expansion last week, he got to Rishi with a bag full of Basic Commendations and was able to buy a full complement of 172-rated upgrades for himself and a couple of companions, with enough left over to buy a complete purple 186-rated outfit on Yavin 4. When I shove a new toon through the Forged Alliances flashpoints, and get the 297 Basic Commendation reward for starting the Shadow of Revan content, they usually have just enough for one full 172 upgrade for themselves, plus a mostly-full upgrade for one companion. And the speed-leveled noob characters are often massively underdeveloped in the Crew Skills area, so I have to spend a ton of credits and time grinding those skills out before I can harvest nodes on Rishi.

In fact, I found that the only way to make Rishi and Yavin content challenging was to try it under-geared. The 172 stuff you can get right away on Rishi, as soon as you enter the main town, is almost over-powered. On my Juggernaut, the only time I ever risked defeat during landscape and main-story questing was if I got super-careless, or walked away from my computer while the character was standing near a mob spawn point. The solo Flashpoints were even easier, given the raw power of the Combat Support Droid - it's fun being that powerful, but there's absolutely no challenge when your pet can annihilate any boss mob it encounters without player intervention.

It's about the same deal with the Revan fight. Now that it's de-bugged, it's basically un-lose-able.

Don't get me wrong, the content is still fun and it's awesome being a major badass after a long career of being everyone's errand-boy. It's just not very challenging for solo play. I imagine the group Flashpoints and Operations require a great deal more effort and coordination than the solo button-mashers, but the most challenge you'll face in the solo game is competing with other players for quest objectives.

Now that I've been through the story five times (and counting!), I can really see a sort of flaw developing in the narrative. The player characters are on track to become the elites of the galaxy. They have risen very nearly to the top of the pyramid to the point where they are basically equals to the highest powers. But my Sorcerer and Juggernaut are still being bossed around by Darth Marr, despite being his equal on the Dark Council (or even his superior as the Emperor's Wrath). It looks like the writers will need to devise a new kind of storytelling mechanic, rather than delivering missions through higher-ups who can push the player around because of their superior rank. It's going to be interesting seeing how they choose to move forward with the storyline of the Emperor and the ghost of Revan.

How many times have you kicked Revan's ass since the patch? Let us know in our comments!