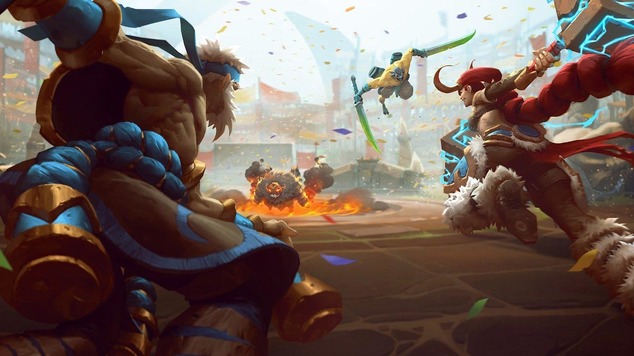 Will Battlerite Be the Next Big Thing in ESports?
Battlerite is a team arena brawler with an emphasis on competitive combat attempting to make waves in the world

Will Battlerite Be the Next Big Thing in ESports?

Battlerite is a team arena brawler with an emphasis on competitive combat attempting to make waves in the world of battle royale gaming and become one of the go-to eSports. Like many other fantasy multiplayer games, Battlerite focuses on strong gameplay and does so through precise attacks and defensive moves as players improve and gain skills to improve their champion. Battlerite Season 3 has just launched, hoping to pick up the fans of the first two seasons and to gain some more as its name in gaming circles improves. The mood in gaming is definitely interested in Battle Royale style games, and as the market becomes full of more and more arena style games, which ones are going to make it out on top?

The latest gaming trend to take off and gain such a huge fanbase is the Battle Royale trend. While not a new phenomenon, battle royale gaming benefits from the accessibility for new gamers and opportunities for established gamers to rise through the ranks and gain a fanbase themselves. Fortnite is a prime example of the build up of the battle royale trend as millions – 125 million at the last count, according to PCGames - flock to play the multiplayer battle game. Battlerite already corners the market on 2 vs 2 and 3 vs 3 games, so a good arena game would help branch Battlerite out into a new era of gaming, one that fits into the current gaming trend. Battle arenas are strong as they can be played across platforms, as the success of the Arena of Valor app has seen. With the trend picking up, Battlerite looks to take its precision gameplay to a wider audience.

Another relatively new phenomenon is the rise of eSports. As Ninjas in Pyjamas sponsor, Betway Esports, shows, there are countless games readily available to play as an eSport – from League of Legends to Counter-Strike: Global Offensive! Given pride of place with a series of tournaments and worldwide recognition, eSports are on the rise. With Dota 2 and FIFA tournaments available for players to make huge amounts of money and be seen by thousands, eager gamers are always on the lookout for the new big thing in eSports. Could it be Battlerite? It certainly has the potential to create a viewership on Twitch. Players of battle royale eSports are able to build themselves up and gain acclaim for tournaments by streaming their games. The greater awareness that it raised through Twitch will show eSports promoters that Battlerite is a huge competitor in the arena. The game is already listed on aggregate eSport tournament site Battlefy, which aims to link up those who want to play various eSports.

Battlerite Royale will be out in September as a standalone game - https://t.co/4BbxT9mJTC pic.twitter.com/ODnPOh9aUn

How Will Battlerite Gain Momentum

There is no secret that the gaming arena nowadays is extremely tight, with newer games struggling to break through as they might have done before the trend became as fully fledged. With a variety of the type of games, Battlerite should position itself in a certain way to ensure it gains and maintains momentum. Battlerite takes its influence from fellow battle arena style multiplayer games that focus on a fantasy angle. Characters that players can choose to be their champions have both range attacks wielding the elements and also use brute strength to craft memorable gaming characters. This reflects the influence of League of Legends. League of Legends would be a good predecessor to Battlerite, both in terms of how the gameplay works, how the fantasy elements slot together, and how the game gained its popularity. League of Legends took a few cycles to gain the momentum it currently has, so for Battlerite to do the same would be beneficial for the multiplayer arena game.

The battle arena trend is one that shows no signs of slowing down as more and more fans are engaging with the style of gameplay and the characters that go alongside it. Battlerite offers a different style of gameplay from the broader battle arenas and takes the precision gaming from the 2 vs 2 games to a wider audience and a wider group of potential opponents. There is no stopping the battle arena game, especially as it establishes itself as a fully fledged eSport, ready to take on the world.