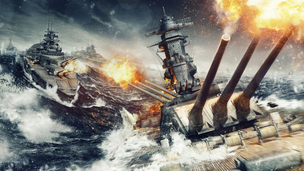 World of Warships  A Brief Overview
<p>Wargaming.Net is no stranger to the realm of historical combat replication. See whats coming for their upc

World of Warships will seem like an old friend to those familiar with Wargaming.Nets initial foray, World of Tanks. Obviously, the game is based on historic naval warfare rather than land, but the similarities will be clear to those that have played WoT in the past.

The first thing to note with World of Warships is the extreme historical accuracy of the ships in use  battle cruisers, aircraft carriers, and destroyers. During todays show, we got to see the United States ships in action. The attention to detail is incredible and 100% accurate to period ships. How can we say that? As an example, the team used the actual blueprints used to build one of the most famous U.S. ships of World War II, the U.S.S. North Carolina. That bears repeating the actual blueprints.

With attention like this to the most minute detail with the ships, its no surprise the same attention appears to have been paid to such things as individual ship speeds, turn radiuses, and weapon load times (it takes a number of men a bit of time to load those 16-inch diameter shells).

We were shown two battles today  a capture the flag type scenario that took place in the tropical waters of the South Pacific and a team deathmatch battle that took place in the icy Northern Sea. In both battles, water depth and terrain came into play in terms of which ships were able to navigate to various areas during the match. Ship types themselves are very important and appear to play very different roles in the game.

Carriers have a variety of AI-controller aircraft available to launch. Early in the match, these craft are used for scouts, quickly showing an aerial view of enemy territory. Depending upon which types of aircraft are launched, they can also be used to battle enemy aircraft or make bombing runs on enemy ships. Though it wasnt detailed how or why, its interesting to note that the carriers were described as being the brains of the operation for the matches we witnessed.

Next in line in terms of size are the battle cruisers. These ships are a middle of the road in terms of armor, buoyancy (an important aspect of ship health in a naval combat game), and firepower. They have a good amount of each, but suffer from relatively slow speeds and wide turning radiuses. What they lack in speed and turning, they more than make up for in range. A cruiser can fire on a target 40 kilometers away. Thats right forty. Four zero. Talk about reach out and touch someone.

Last in the line of size are your destroyers, the scouting hit and run champions. They have very light armor and not a lot of buoyancy acumen, but they pack a respectable punch and can haul ass compared to all the other ships we were shown. Not only are they fast as hell; they love to get up close and launch a barrage of torpedoes on unexpecting targets. They are also the only ships that were able to go into shallow waters which was crucial during the South Pacific match since they were able to weave in and out of the islands there.

For any real fan of historical combat, especially from the era of World War II, there are lots of things to find interesting about World of Warships. Its certainly not the game for everyone, but if the history of World of Tanks is any indication, it definitely bears watching.

An Updated Look at World of Warships at PAX Prime 2014