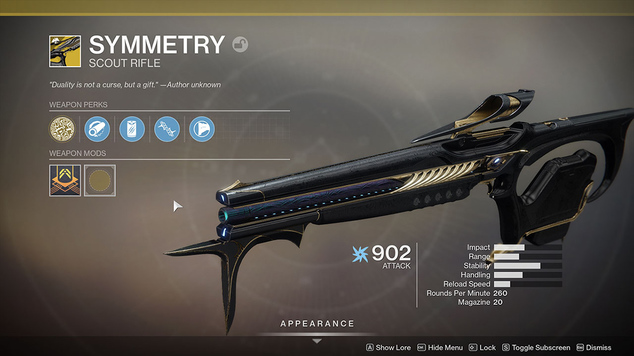 Destiny 2 Symmetry Review
Is Symmetry one of the most overpowered weapons in Destiny 2?

Is Symmetry one of the most overpowered weapons in Destiny 2?

Destiny 2's Season of Dawn brought a plethora of change.   One addition has been the exotic scout rifle Symmetry.   What makes Symmetry special is a combination of its extraordinary fire rate at 260 RPM,  its stability, and its perk.

If you buy the Season Pass (which we recommend for Season of Dawn) you get the weapon at Rank 1.  If you are a free to play player then you will receive it at Rank 35 which isn't very hard to get.   Bounties remain the best way to rank up for those of you who are waiting until Rank 35.

Symmetry's perk is the piece of the pie that really makes it interesting.   The perk is called Revolution 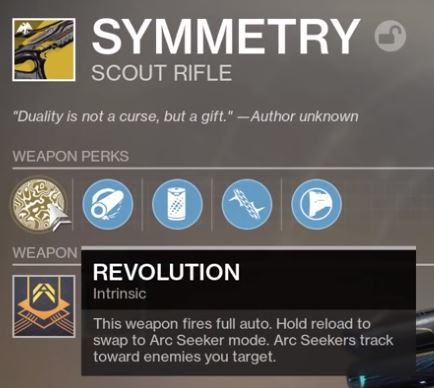 The gun fires in two different modes and fires in full auto.  Amazing!   You hold Reload, which takes a bit of getting used to to swap modes.  In the alternate mode, your projectiles track the target.   Dynamic Charge, the final perk is what potentially tips this weapon into overpowered territory. 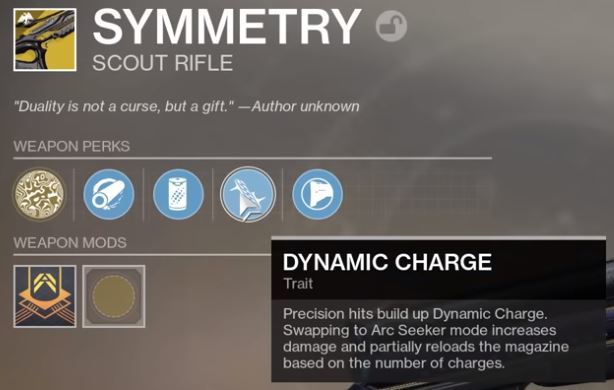 Is the Symmetry Scout Rifle good in PvP?  Let's take a look at the numbers.

The sweet spot in Arc Seeker mode is still up for debate, but in PvP it appears to be two stacks.

At two stacks in Arc Seeker mode, you can three tap an opponent with a Time To Kill of 0.8 seconds.

At six stacks in Arc Seeker mode, you can two tap opponents with a Time To Kill of about 0.4 seconds.

NOTE: Your rate of fire gets slower in Arc Seeker Mode.

Is the Symmetry Scout Rife good in PvE?  Let's take a look at those numbers.

One stack of Dynamic Charge brings a 54% increase in damage.

Two stacks of Dynamic Charge bring a total of 91% increase in damage.  That's substantial.  The kicker, however, is that your rate of fire drops substantially as well.

The gun plays very differently in PvE than in PvP.   Rather than hitting two stacks of Dynamic Charge and swapping to Arc Seeker you want to wait as long as possible, potentially letting it even hit 15 stacks if you are going to taking on a boss.   Anything below six stacks is actually inferior (due to both DPS and projectile travel time) to using the weapon in its native mode.

TLDR Is Symmetry A Good Weapon in Destiny 2?

In PvE never swap modes before six stacks and wait as long as possible if you can.

Hopefully, this helps you determine whether Symmetry will be part of your loadout.

Here are some other opinions on the weapon.    I like it, but I also like Scout Rifles in general.

If you are looking for other Destiny 2 content similar to this then hit the Destiny 2 Guide Portal I have put together just for you.

Will Symmetry become part of your arsenal?  I'd love to know.