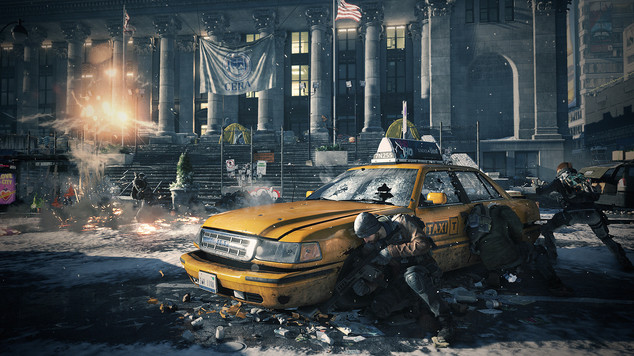 Enemy Factions Guide - The Division
A guide to the enemy factions in Tom Clancy's The Division.

In the world of The Division, the ruined city of New York has been divided up by warring factions, each of which is fighting for survival and ultimately control of the city. As one of the last remaining members of the government, you’ll have to rally your squad to take each faction out one by one, while expanding the Division’s control.

Each faction has their own back story that ties into the area they control and the way they fight. So you’re not going in blind, we’ve put together a brief look at each of the factions in the Division and what you can expect when you encounter some of their members.

The cleaners are a gang that is primarily composed of former sanitation workers like garbage men and janitors. Since the fall they seem to have gone a little berserk and have taken their job of cleaning to the next level by burning anything they deem to be unclean to the ground.

The cleaners are known for their widespread use of flamethrowers in combat. So long as you keep your distance the flames are easy enough to counter. Just aim for the fuel canisters on their back and wait for the boom. They also use Molotov cocktails, so beware of any objects that get thrown your way.

These enemies have no particular allegiance to any large well known faction, and instead prefer to commit their crimes alone or in small groups. You’ll often find them scattered throughout the areas in between the major gang zones.

The most dangerous thing about them is that they employ all different sorts of weapons. When you come across a group of rioters be careful, they could be packing more than you bargained for.

Run by a group of criminals that escaped from the infamous Rikers Island Prison during the spread of the virus, they are one of the more dangerous clans you’ll run across. You can tell your encountering a Riker member because of the prison uniforms most of them still wear.

The Rikers carry a wide array of weaponry much like the Rioters, so be careful when approaching a group of them. They are the largest gang in terms of population, so always be ready to take on a group when travelling in one of their territories.

These enemies are no simple thugs or escaped convicts they’re highly trained military personnel. Soon after being deployed to New York this elite private military unit went rogue and now controls a large area of the city and refuses to give it up without a fight. You’ll encounter them at the highest levels of the game which means you’ll be fighting them often if you want the best loot.

They are tough opponents, better geared and tactically smarter than their civilian counterparts. It’s a very good idea to bring a full squad with you when you expect to encounter elements of the LMB. Their members can come in any form that the players themselves can take. You have engineers that will deploy turrets, riflemen, snipers, grenadiers, gunners, and medics all working in harmony.