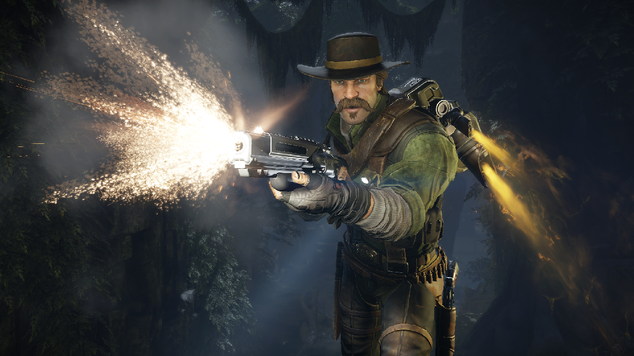 If the fact that he’s an intergalactic bounty hunter isn’t enough to win you over, maybe his arsenal of high tech tracking gear and high speed shotgun will. Abe is a hunter Trapper, skilled in the ways of locating where a monster is hiding and penning it in so that his teammates can unload the big guns.

Abe’s tracking style is a little different than the other trackers in that he relies more on signs that the monster leaves like footprints and scared birds than high tech gadgets. Once the monster is in his sight however, Abe can shoot it with a tracking dart that will relay its exact location to the team for 45 seconds. After that it’s just a matter of closing the distance, setting up your Mobile Arena, and holding down the big guy with a few well-placed Snare Grenades.

This isn’t your standard pump action shotgun; the Custom Shotgun is capable of firing at an extremely high rate, inflicting maximum damage in minimum time. This rapid fire of course comes with a drawback; it can become difficult to aim during extended bursts.

Your primary means of tracking monsters, the tracking dart pistol is different form the other trapper’s gear because it does not locate the monster for you. After locating the monster via footprints and other signs, shoot the monster with a tracking dart to mark its location on the map for 45 seconds.

You can also shoot any other wildlife with a dart and if the monster eats them the tracking dart will transfer to it.  Darts you use on wildlife will remain active on the animal until the game is over or the monster eats it, at which point the 45 second timer begins.

There is no range on the tracking dart gun, if you can see it you can shoot it.

You’ve tracked the monster and have him contained in the Mobile Arena, but you still have to stop him from tearing your team apart. Abe’s monster suppression system of choice is the Snare Grenade. When tossed, the Snare Grenade will expand into a blue cloud. If the monster steps into this cloud the effects of the snare grenade take hold, slowing the monster’s movement speed so long as they remain in the cloud. Unlike the Harpoon, the monster does not have to break out of the snare, but only move out of it’s area of effect (albeit they will be doing it much more slowly). The Snare grenade also reduces the speed of the monster’s melee attacks, as well as the range of many abilities.

As with the rest of the Trapper class, Abe comes equipped with the standard issue Mobile Arena. To avoid having to track the monster manually all over again, deploy the Mobile Arena as soon as you come within range. Knowing when you are within range is made a lot easier by the info provided via the tracking dart.

Always use the mobile arena when you can. A contained monster will be unable to feed on animals to gain armor or evolve a stage. It also makes them sitting ducks for your teammate’s heavier weapons like the orbital barrage.