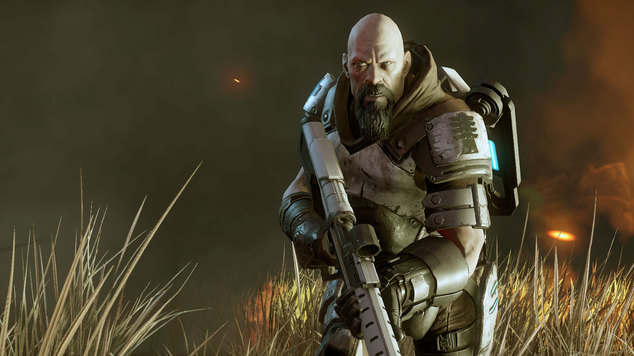 Lazarus is one of the strongest Medic’s in Evolve with the exception that his healing isn’t great but his ability to keep a team and himself alive are exceptional. Unlike Val which uses the Medgun to heal her allies, Lazarus only has access to Healing Burst. His other skills are a Cloak, a Sniper Rifle and his Lazarus Device. The Cloak does exactly what you’d expect and turns you invisible for a period of time. The Sniper Rifle is similar to Val’s with the exception that it’s silenced and doesn’t punch holes in the Monster’s armor. Finally, the Lazarus Device allows you to bring players back from the dead (not downed) meaning that even when a Monster thinks he has killed all the players, they can be brought back to life. Sadly this makes Lazarus the main target for a Monster and because of the power of the device, his healing is limited to ensure it’s balanced.

Lazarus’ Silenced Sniper Rifle acts the same as Val’s, with the exception it doesn’t punch holes in the Monster armor. It’s use is really just to act as a nuisance to the Monster and deal some damage from range. The silencer also makes it difficult for the Monster to locate you.

The Cloaking Device turns you invisible for a brief period of time. It’s really important that you try to save this for as long as possible as without it, you’ll likely die quickly especially if you have no Healing Burst.

On a lengthy cooldown, the Lazarus Device permits you to bring a player back from the dead. What also makes it so powerful is that those brought back don’t suffer a mark against their health meaning they’re still at a full health pool without the debuff. Combined with the cloaking device, you can effectively keep your team up on their feet indefinitely (if you’re skilled).

As the class skill for all Medic’s, Healing Burst provides a boost of health to all those around the Medic. Its range isn’t large, but it does provide a large chunk of health. I’d recommend you try your best to save this skill until you need it and when you do use it, ensure you’re around as many fellow Hunters as possible.