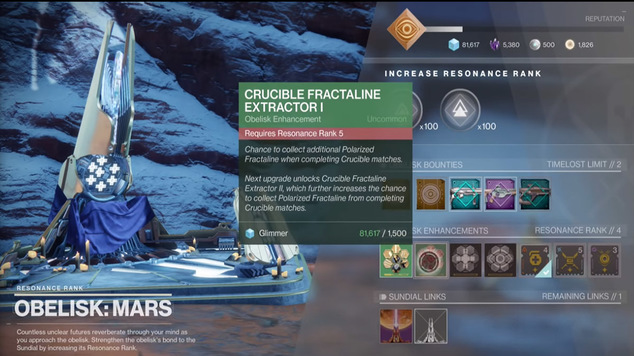 Fastest Path to Farm Polarized Fractaline in Destiny 2
Upgrading your obelisks in Destiny 2 is paramount to getting the better gear and perks. Here is how you upgrad

This article was originally written when Season of Dawn launched and has been updated to help players farm Fractaline for the Empyrean Foundation event in Destiny 2.   Enjoy!

You will need to farm Polarized Fractaline for every single obelisk.   Upgrading a perk on one obelisk does not upgrade it universally.  You need to actually get the upgrade on every obelisk.   Likewise, ranking up an obelisk does not rank up the others.  Each one is its own special snowflake that requires your attention.

The Mars Obelisk is the one that I believe is the most important to upgrade first.   I happened to choose it by fortunate accident when I dumped in my first Polarized Fractaline to upgrade resonance rank.   I then went back and looked at the Obelisk Enhancements available on Mars and on the Tangled Shore and one jumped out at me, Crucible Fractaline Extractor.   This gives you a chance to collect additional Polarized Fractaline when you complete a Crucible match.   I enjoy Crucible, so for me, this was a win-win. 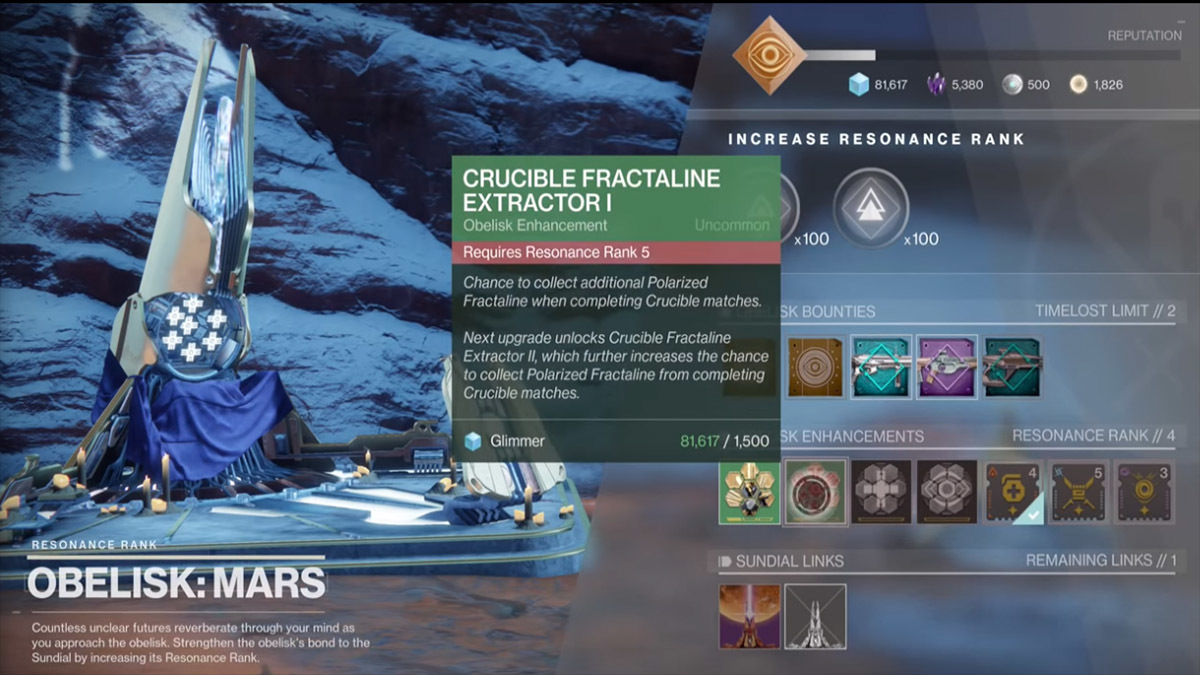 Getting this early will give me a huge boost in material over the course of the season.

If you aren't into Crucible and prefer Gambit then head to the Tangled Shore Obelisk where there is a perk that will suit your style of play as it gives you a bonus to playing Gambit matches.

How to Farm Polarized Fractaline

There are a few ways to farm Polarized Fractaline.

Completing the Sundial encounter will farm 10 Polarized Fractaline.   This isn't much.  It will take you ten runs to boost an obelisk by one Resonance Rank.

Head to your Triumphs | Season 9 | Seasonal Activities and check out the available Triumphs.  You may have completed a few already.  They will give you an early boost of Polarized Fractaline to help you on your way.

Osiris on Mercury has bounties that will grant you decent amounts of Polarized Fractaline.  The Obelisks themselves also have bounties.

You Have Three Characters

Each of your characters can do the bounties.  That gives you 3X the Polarized Fractaline of just playing your main.  The best part, these Obelisk upgrades are account-wide and not per character.   For instance, if you rank up the Mars Obelisk with your Hunter it will be that rank for your Titan and Warlock.

Most activities including Strikes, Crucible, etc. have a chance to drop Polarized Fractaline

The best way to farm Polarized Fractaline are in this order:

Datto has created a video sharing his take on how to farm Fractaline.  Different voice, similar guidance to what we have above, but worth the watch.

Do you have faster ways?  Let me know!