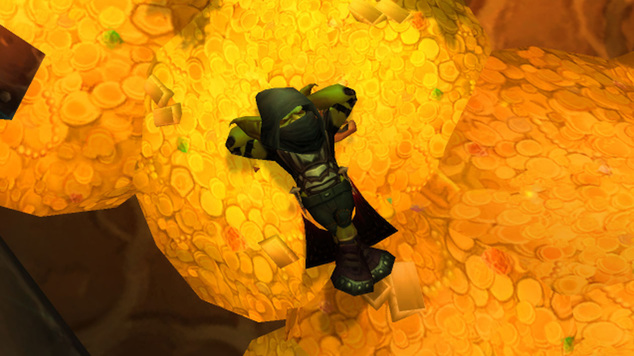 How To Earn Gold Quickly In WoW Classic
Here's seven easy steps to gain lots of gold in a short amount of time in WoW Classic.

I've regularly seen players in map chat, or on Reddit and the official forums ask how you can quickly make money in WoW Classic. While I'll stress that everything in WoW Classic takes considerable time, it's fairly easy to get enough gold for a mount, and earning large sums isn't particularly challenging if you know what you're doing. Here's my best advice.

There are plenty of Addons for WoW Classic that'll aid your ability to make money. We've a list here, but key ones - certainly early game - are those which allow you to establish what items are worth, and whether to vendor them. There's also Addons that help with gathering (by marking resources on your map), some which point our rare enemy locations, and others which simplify the Auction House UI so that it's quicker and easier. It really is incredibly important to make use of such addons, as they'll save you considerable time and give you a far greater grasp on X, Y or Z is worth.

Not having bags during the early game will see you disgard a considerable amount of items. With travel time being so slow, every item you throw away is a waste of money. Even if the items you're throwing away aren't worth much, it all adds up. Not only that, but in the early stages of the game where you need copper for skills, it goes a long way in keeping your coin purse full. If you can, find a guild quickly and send early materials (Linen) to a tailor, you'll quickly gain a considerable amount of space.

Mining and Herbalism are great trade skills early game as they can be farmed quickly, tracked through addons, and banked to the auction. For players leveling other trade skills, these core resources also sell incredibly well, even at early levels. Gather as many as you can, as often as you can, and while it's not ideal to go miles out your way for a herb or ore stack, it'll give you a massive financial push.

Be Prepared To Grind

While this pays off in later levels, rather than early, grinding actually has a great deal of value in WoW Classic. All enemies have loot tables, and gaurenteed drops. If you're in a spot where high value crafting items drop (such as high-level materials) you can steadily obtain a significant quantity of resources. Loot drops are also fairly consistent across all levels, and you'll regularly encounter green items that vendor for a pretty price (even more so if you drop them on the Auction House).

Make Use Of The Auction House

It goes without saying: use it, and use it often. The Auction House is incredibly easy to make money on, and simple techniques across every MMO works exactly the same here. What's particularly potent about the WoW Auction House, is the fact the game not only has fixed loot tables (so you can farm specific items), but when layering is removed and server caps decrease as a result, controlling the Auction House and its content is incredibly easy to do. Once you've got some money in your pocket, you can often buy up and re-list resources for a quick turn in profit. I often do this with herbs, and it effectively allows you to dictate what your server pays.

A simple money saving tool, but it's often not worth buying every ability when it becomes available. Higher rank abilities are massively mana heavy, and can slow down your leveling process. Spending money on them - when you can barely use them more than once in combat) isn't worthwhile. Save your pennies, and grab them later.

A lot of Twink gear is bind on equip. It's highly sought after because rich players transfer them to their "alts". If you can farm specific Twink items you'll make a lot of money very quickly, if you throw them straight on the Auction House.