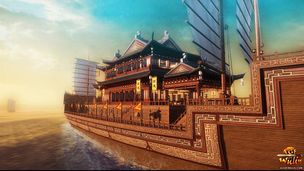 Age of Wulin  Legend of the Nine Scrolls suffered a little bit of a delay with its European version earlier this year, but pre-registration for the games upcoming closed beta is now open and signing up could get you a chance to earn some neat new prizes.

By pre-registering youll get a chance to win one of the games closed beta keys and if you sign up before October 1st, you could also win an Age of Wulin t-shirt.

Age of Wulin is set in ancient China and allows players to build their characters skills by obtaining scrolls rather than leveling to enhance their armed or unarmed combat abilities. The game boasts to have more than 20k quests, 8 schools of combat, guild housing, 17 professions and much more.

Age of Wulin  Legend of the Nine Scrolls

Gala Networks Europe and gPotato.eu Invites Players To Pre-Register for Access and Goodies

Dublin, Ireland  August 25th, 2011  Gala Networks Europe, one of the leading free-to-play games publishers and operator of the http://www.gpotato.eu/ portal, is delighted to announce that pre-registrations for its upcoming AAA martial arts MMO, Age of Wulin  Legend of the Nine Scrolls has opened. Players that sign up to the waiting list for access to Age Of Wulins closed beta program will also be in line to win special merchandise to commemorate the event.

Players are invited to sign up at www.ageofwulin.com to register their interest.

By pre-registering for Age of Wulin, users will automatically take part in the Closed Beta lottery to get a chance to win one of the eagerly awaited keys for the European CBT, which is set to take place in 2012. Furthermore, users that register before the 1st October 2011 will also get the chance to win one of five exclusive Age of Wulin t-shirts.

Age of Wulin will take players back into ancient Chinese history, where they will be immersed in traditional daily life during a period when martial arts culture was at its peak. Instead of a linear level system, players can develop their character by obtaining skills through the games dynamic armed and unarmed combat system, which combines a variety of martial arts such as Shaolin kung-fu or Tai Chi and ancient Chinese philosophies such as acupuncture and inner meridians. Age of Wulin also takes place in a beautiful 3D world with high quality graphics and deep, engaging game play.

Age of Wulin will include everything that players expect from a high quality MMORPG, such as extensive PvE and PvP content, crafting and professions, group battles, challenges to solve conflicts, a guild housing system and much more. Age of Wulin covers a huge world with more than 130 km², 8 different schools of combat, 17 life professions, more than 1,000 skills to customise the players strength, more than 20,000 quests and up to 20,000 NPCs.

To get the chance to win a CBT key and one of the five exclusive Age of Wulin t-shirts, players must simply pre-register for Age of Wulin at www.ageofwulin.com. A gPotato.eu account is required to apply, which can be registered at: http://en.gpotato.eu/Account/AccReg.aspx.

Age of Wulin will be available in English, French and German in 2012 from the gPotato.eu portal. Its easy to follow Age of Wulin. Facebook users can join the Age of Wulin community here and YouTubers can watch the Age of Wulin Channel at http://www.youtube.com/user/AgeofWulin.

Gala Networks Europe Ltd. is a leading European free-to-play online games publisher. It operates the gPotato brand in Europe by hosting, publishing and distributing free online games through the www.gPotato.eu portal. Established in Dublin, Ireland in 2006, it operates a portfolio of MMORPGs including Flyff, Rappelz, Street Gears, Dragonica, Allods Online, Castle of Heroes, Canaan Online and Terra Militaris. The gPotato.eu portal is now a major destination for online gamers with over 5 million users. The martial-arts MMORPG Age of Wulin and the free riding action MMORPG Sevencore will be released in 2012. Further information on the company can be found at http://www.gala-net.eu.

Suzhou Snail Digital Technology Co. Ltd. (Snail Game), founded in 2000, is one of the earliest and leading 3D online game developers in China. Snail Game has successfully developed and operated online games: Voyage Century, Age of Armor, 5 Street, The Chosen, Terra Militaris and Castle of Heroes, with more to come. These games have been distributed to more than 20 countries worldwide where they enjoy an amazing success.

To read the latest guides, news, and features you can visit our Age of Wulin Game Page.